Neuralink and the Brain's Magical Future 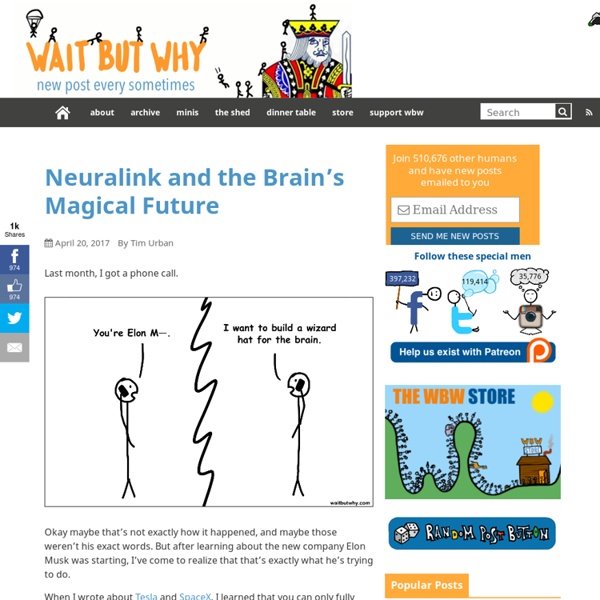 Are We Humans Terminally Insane or Just Waking Up? By Paul Levy Source: Reality Sandwich The following article was originally published on Awaken in the Dream. “The world today hangs by a thin thread, and that thread is the psyche of man.”– C. G. Jung Separating Science Fact From Science Hype: How Far off Is the Singularity? The term “artificial intelligence” was only just coined about 60 years ago, but today, we have no shortage of experts pondering the future of AI. Chief amongst the topics considered is the technological singularity, a moment when machines reach a level of intelligence that exceeds that of humans. While currently confined to science fiction, the singularity no longer seems beyond the realm of possibility. From larger tech companies like Google and IBM to dozens of smaller startups, some of the smartest people in the world are dedicated to advancing the fields of AI and robotics. Now, we have human-looking robots that can hold a conversation, read emotions — or at least try to — and engage in one type of work or another.

A clinical psychologist explains how Ayn Rand seduced young minds and helped turn the US into a selfish nation The ‘Atlas Shrugged’ author made selfishness heroic and caring about others weakness. Ayn Rand’s “philosophy” is nearly perfect in its immorality, which makes the size of her audience all the more ominous and symptomatic as we enter a curious new phase in our society….To justify and extol human greed and egotism is to my mind not only immoral, but evil.— Gore Vidal, 1961 Only rarely in U.S. history do writers transform us to become a more caring or less caring nation. In the 1850s, Harriet Beecher Stowe (1811-1896) was a strong force in making the United States a more humane nation, one that would abolish slavery of African Americans.

Fake news 2.0: personalized, optimized, and even harder to stop Fake news may have already influenced politics in the US, but it’s going to get a lot worse, warns an AI consultant to the CIA. Sean Gourley, founder and CEO of Primer, a company that uses software to mine data sources and automatically generate reports for the CIA and other clients, told a conference in San Francisco that the next generation of fake news would be far more sophisticated thanks to AI. “The automation of the generation of fake news is going to make it very effective,” Gourley told the audience at EmTech Digital, organized by MIT Technology Review. The warning should cause concern at Facebook. The social network has been embroiled in a scandal after failing to prevent fake news, some of it created by Russian operatives, from reaching millions of people in the months before the 2016 presidential election. More recently the company been hit by the revelation that it let Cambridge Analytica, a company tied to the Trump presidential campaign, mine users’ personal data.

Big-League Bluster There’s an old joke about Soviet Russia that you might have heard, where you reverse the two parts of a sentence: “In America, you break law. In Soviet Russia, law breaks you.” The joke is an example of chiasmus, a rhetorical form that repeats words or clauses in transposed order—but this particular version has a name: the “Russian Reversal.” In the United States, the Russian Reversal flourished during the Cold War.

How Philip K. Dick redefined what it means to be (in)human Fifty years ago, Philip K. Dick’s novel Do Androids Dream of Electric Sheep? questioned what it means to be human in ways that have an immense lasting influence. The action of the novel – and the Blade Runner films based on it – largely revolves around the central tension and struggle between biological humans and artificially constructed androids. Arguably, however, the story’s greatest continuing relevance is in the way it challenges a particular image of the human that has come to dominate in modern Western culture. Looking beyond "America First": war, politics, and human community The polarity between self-assertive and integrative tendencies is characteristic of all human life on earth, even including the life of separate states in world politics. In this connection, regrettably, President Donald Trump’s conspicuously proud emphasis on “America First” represents an unambiguous preference for the former. In time, this unfortunate preference could subvert any still remaining chances for wider human community, residual opportunities for cooperation now so desperately needed to prevent some “final” form of global catastrophe. The president’s core mantra is inherently crude and injurious. Instead of “America First,” the only sensible posture for any US president must soon be some variant of “All the world together.” What should we really expect from President Trump’s literally glaring contempt for wider world community?

Lawmakers Want You to Be Able to Sue Robots If a robot, acting autonomously, injures or otherwise wrongs a human, who will be held responsible? Some European lawmakers think that the best way to resolve this question will be to give robots “electronic personalities,” a form of legal personhood. Proposed in a 2017 report from the European Union, this form of robot rights wouldn’t give them status like that of human beings — they’re not going to get married, or buy a house, or adopt a child. But it would make it possible for self-learning robots to sue and be sued, with legal status like a corporation. Proponents say that the idea is a common-sense move, one that will be necessary to create a workable legal structure as these entities become smarter and more integrated into everyday human life. But not everyone agrees.