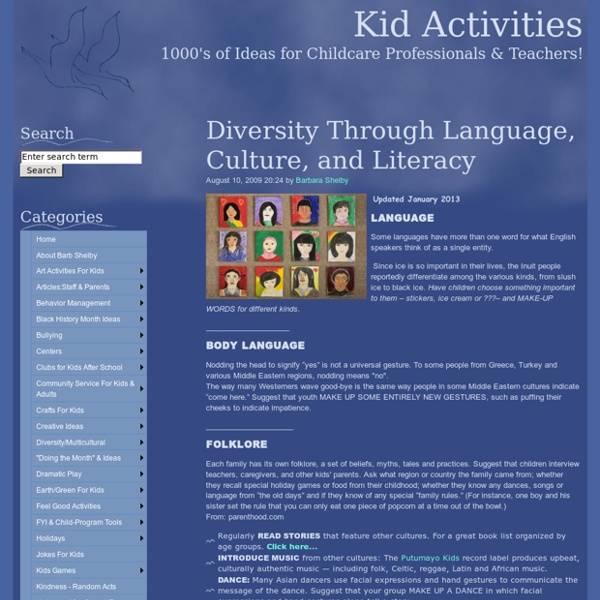 Updated January 2013 Some languages have more than one word for what English speakers think of as a single entity. Since ice is so important in their lives, the Inuit people reportedly differentiate among the various kinds, from slush ice to black ice. Have children choose something important to them – stickers, ice cream or ???– and MAKE-UP WORDS for different kinds. Nodding the head to signify “yes” is not a universal gesture. Each family has its own folklore, a set of beliefs, myths, tales and practices. Regularly READ STORIES that feature other cultures. MAKE “THE CRAYON BOX”... With a black marker on white paper- Draw a large CRAYON SHAPE and make copies for the children to use...Or you can download the pattern Here What You Do: Read the following poem to your students. THE CRAYON BOX THAT TALKED Poem by: Shane DeRolf While walking into a toy store the day before today I overheard a crayon box with many things to say "I don't like Red!" WOULDN'T IT BE TERRIBLE...? PEN PALS!!!

The 5 Biases Pushing Women Out of STEM By now, we’ve all heard about the low numbers of American women in science, technology, engineering, and math (STEM). Some argue it’s a pipeline issue – that if we can interest more young girls in STEM subjects, the issue will resolve itself over time. But that’s not convincing. After all, the percentage of women in computer science has actually decreased since 1991. Another theory is that women are choosing to forgo careers in STEM to attain better work-family balance—rather than being pushed out by bias. But evidence for that is also thin.

21 Multicultural Middle Grade Novels for Summer Reading Summer is around the corner! Well, at least in the northern hemisphere…. Time to stock up on summer reads for your middle graders! There are some wonderful new releases, my favourite two being I Lived on Butterfly Hill and Listen, Slowly. Forcing Kids To Stick To Gender Roles Can Actually Be Harmful To Their Health Raising children in societies that adhere to rigid gender roles, with fixed ideas about what should be considered “masculine” and “feminine,” can actually be detrimental to their physical and mental health, according to a study that observed 14-year-olds’ interactions over a three month period. “Usually we think of gender as natural and biological, but it’s not… We actually construct it in ways that have problematic and largely unacknowledged health risks,” lead researcher Maria do Mar Pereira, the deputy director for the University of Warwick’s Centre for the Study of Women and Gender, explained in an interview with ThinkProgress. Pereira drew her conclusions after being embedded in a class of teenagers in Lisbon, Portugal. Pereira observed both boys and girls regulating their behavior in potentially harmful ways in order to adhere to gender norms.

Multicultural Fiction for Teenagers The Absolutely True Diary of a Part-Time Indian by Sherman Alexie. 2007Budding cartoonist Junior leaves his troubled school on the Spokane Indian Reservation to attend an all-white farm town school where the only other Indian is the school mascot. American Born Chinese by Gene Luen Yang. 2006Alternates three interrelated stories about the problems of young Chinese Americans trying to participate in the popular culture. Presented in comic book format.

Why Teach Multicultural Literature? iStockphoto.com I have taught literature at the college level for almost a decade and at as many as six different campuses. These have mainly been classes that were focused on non-western writing. One semester, I had assigned Nigerian novelist Chimamanda Ngozi Adichie’s Purple Hibiscus and only a week earlier her TED talk, Danger of a Single Story had started to circulate on the web. I sent the link to my students and thought we could incorporate it into our discussion on colonialism, multiculturalism, issues of race and of course, the novel itself. 50+ Years of Coretta Scott King Award-Winning Books (and Why Your Kid Should Read Them) For more than fifty years, books by African American writers and artists have been honored by receiving the Coretta Scott King Book Award. This award promotes understanding and appreciation of Black culture. The award is designed to commemorate the life and works of Dr. Martin Luther King, Jr., and to honor Mrs. Coretta Scott King for her courage and determination to continue the work for peace and world brotherhood. After Dr.

Multicultural Fiction for Teenagers The Absolutely True Diary of a Part-Time Indian by Sherman Alexie. 2007Budding cartoonist Junior leaves his troubled school on the Spokane Indian Reservation to attend an all-white farm town school where the only other Indian is the school mascot. American Born Chinese by Gene Luen Yang. 2006Alternates three interrelated stories about the problems of young Chinese Americans trying to participate in the popular culture. Presented in comic book format. The Astonishing Life of Octavian Nothing, Traitor to the Nation. Vol. I, The Pox Party by M.T.

The Amelia Bloomer Book List About the The Amelia Bloomer Book List The Amelia Bloomer Project, a committee of the Feminist Task Force of the Social Responsibilities Round Table, compiles the Amelia Bloomer List, an annual annotated book list (or bibliography) of well-written and well-illustrated books with significant feminist content, intended for young readers (ages birth through 18). A few years ago, a book by Shana Carey introduced nineteenth-century feminist activist Amelia Bloomer to the picture-book crowd. Published in 2000, YOU FORGOT YOUR SKIRT, AMELIA BLOOMER! uses humor and history to bring the life and work of this pioneering newspaper editor, feminist thinker, public speaker, and suffragist to a new generation.

2020 Arab Muslim Children Books {Resource} by A Crafty Arab Welcome 2020 and all these stunning children books by Arab and/or Muslim authors, or about Arab and/or Muslim kids, to enjoy! Now that January has arrived, it means that Multicultural Children’s Book Day is right around the corner. I am so excited to be co-Hosting another year and will be sharing a review of a book about a Palestinian little girl on January 31st, 2020. 30+ Muslimah Protagonist MG/YA & Comics {Resource} by A Crafty Arab March is Women’s History Month, and we are honoring this month by compiling this book list of Muslimah protagonist that are featured in MG, YA and comics. It is important to take the time to recognize the great contributions that women have made to our society. In the Muslim world, women have held 13 positions as heads of state and government.