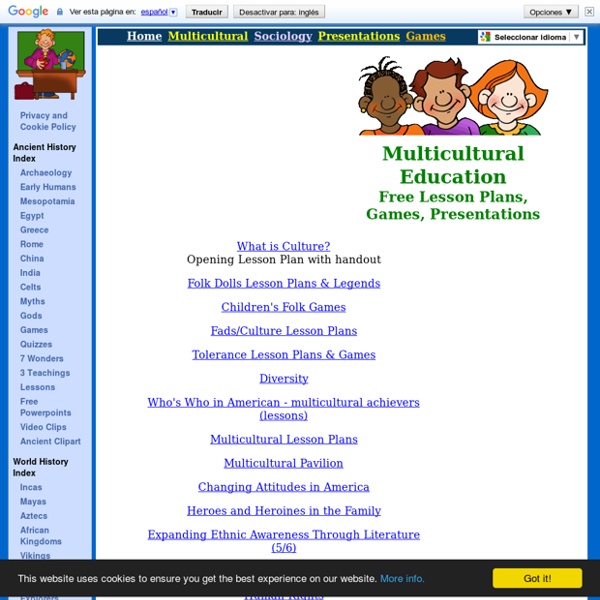 Diversity/Multi Cultural with Language-Literacy Updated January 2013 Some languages have more than one word for what English speakers think of as a single entity. Since ice is so important in their lives, the Inuit people reportedly differentiate among the various kinds, from slush ice to black ice. Nodding the head to signify “yes” is not a universal gesture. Each family has its own folklore, a set of beliefs, myths, tales and practices. Regularly READ STORIES that feature other cultures. MAKE “THE CRAYON BOX”... With a black marker on white paper- Draw a large CRAYON SHAPE and make copies for the children to use...Or you can download the pattern Here What You Do: Read the following poem to your students. THE CRAYON BOX THAT TALKED Poem by: Shane DeRolf While walking into a toy store the day before today I overheard a crayon box with many things to say "I don't like Red!" WOULDN'T IT BE TERRIBLE...? Wouldn't it be terrible? INTRODUCE OTHER LANGUAGES AND SIGN LANGUAGE... PEN PALS!!! CULTURE & GEOGRAPHY... •Study other cultures.

The 5 Biases Pushing Women Out of STEM By now, we’ve all heard about the low numbers of American women in science, technology, engineering, and math (STEM). Some argue it’s a pipeline issue – that if we can interest more young girls in STEM subjects, the issue will resolve itself over time. But that’s not convincing. After all, the percentage of women in computer science has actually decreased since 1991. Another theory is that women are choosing to forgo careers in STEM to attain better work-family balance—rather than being pushed out by bias. But evidence for that is also thin. My own new research, co-authored with Kathrine W. We conducted in-depth interviews with 60 female scientists and surveyed 557 female scientists, both with help from the Association for Women in Science. Pattern 1: Prove-it-Again. Pattern 2: The Tightrope. “I’ve gotten remarks like, ‘I didn’t expect someone Indian…and female to be like this,” said a micro-biologist. Pattern 3: The Maternal Wall. Pattern 4: Tug-of-War. Pattern 5: Isolation.

Why Teach Multicultural Literature? | The Huffington Post iStockphoto.com I have taught literature at the college level for almost a decade and at as many as six different campuses. These have mainly been classes that were focused on non-western writing. One semester, I had assigned Nigerian novelist Chimamanda Ngozi Adichie’s Purple Hibiscus and only a week earlier her TED talk, Danger of a Single Story had started to circulate on the web. I sent the link to my students and thought we could incorporate it into our discussion on colonialism, multiculturalism, issues of race and of course, the novel itself. Why teach U.S. students literature from different countries? Here is the video that set this off, followed by the student’s letter and my response: About the Adichie talk at the TED conference. The problem with these kinds of conversations is that you have to be really careful about how ideas are presented and in particular how things are worded. In my opinion, Adichie perfectly typifies what you could call the ugly side of multiculturalism.

Forcing Kids To Stick To Gender Roles Can Actually Be Harmful To Their Health Raising children in societies that adhere to rigid gender roles, with fixed ideas about what should be considered “masculine” and “feminine,” can actually be detrimental to their physical and mental health, according to a study that observed 14-year-olds’ interactions over a three month period. “Usually we think of gender as natural and biological, but it’s not… We actually construct it in ways that have problematic and largely unacknowledged health risks,” lead researcher Maria do Mar Pereira, the deputy director for the University of Warwick’s Centre for the Study of Women and Gender, explained in an interview with ThinkProgress. Pereira drew her conclusions after being embedded in a class of teenagers in Lisbon, Portugal. Pereira observed both boys and girls regulating their behavior in potentially harmful ways in order to adhere to gender norms. “All of the girls were within very healthy weights, but they were all restricting their intake of food in some way.

Multicultural Fiction for Teenagers | Madison Public Library The Absolutely True Diary of a Part-Time Indian by Sherman Alexie. 2007Budding cartoonist Junior leaves his troubled school on the Spokane Indian Reservation to attend an all-white farm town school where the only other Indian is the school mascot. American Born Chinese by Gene Luen Yang. 2006Alternates three interrelated stories about the problems of young Chinese Americans trying to participate in the popular culture. Presented in comic book format. The Astonishing Life of Octavian Nothing, Traitor to the Nation. Vol. I, The Pox Party by M.T. Bamboo People by Mitali Perkins. 2010Two Burmese boys, one a Karenni refugee and the other the son of an imprisoned Burmese doctor, meet in the jungle and in order to survive they must learn to trust each other. Before We Were Free by Julia Alvarez. 2002In the early 1960s in the Dominican Republic, twelve-year-old Anita learns that her family is involved in the underground movement to end the bloody rule of the dictator, General Trujillo.

Multicultural Activities PassportsPromote multicultural awareness and self esteem with this early childhood education activity by Matina. Materials: Paper and a camera. Description: We made passports by stapling white paper to construction paper. Then from January until May we studied a different country. We studied Russia, Africa, Ireland, Israel, China, Antarctica, Australia, Mexico, Japan, France, Hawaii, and Saudi Arabia. Then for each country the youngsters wore a hat or a prop from that country (ex: France, beret). World PassportTeach pre-k and kindergarten children the concept of "Around the World" with this early childhood project by Gina. Materials: Blank booklet and a stamp for each country. Description: Teachers decide which countries you want your class to visit. Once the week was up we went through our passport and planned a 'Round the world party where each child dressed like the people from one of thecountries we visited and we made native foods and played native games. Japanese: Hinamatursi Day! 1.

ACT for Youth - Adolescence - Ethnic and Racial Identity Development Identity development, the growth of a strong and stable sense of self across a range of identity dimensions, is central to adolescent development [1]. While we have many types of identities (religious, cultural, and national, to name a few), ethnic and racial identities are an important part of how we see ourselves and how others see us. Ethnic and racial identities, of course, are not adopted solely by minority populations. Everyone develops a sense of ethnic and racial identity. Visit Toolkit: Identity Development for resources. Learn more about Adolescent Development. Ethnicity and Race Ethnicity and race refer to different dimensions of our identities. Ethnicity refers to the idea that one is a member of a particular cultural, national, or racial group that may share some of the following elements: culture, religion, race, language, or place of origin. Race is a social construction that refers to characteristics possessed by individuals and groups. What is Ethnic and Racial Identity?