Finally, a breakthrough alternative to growth economics – the doughnut 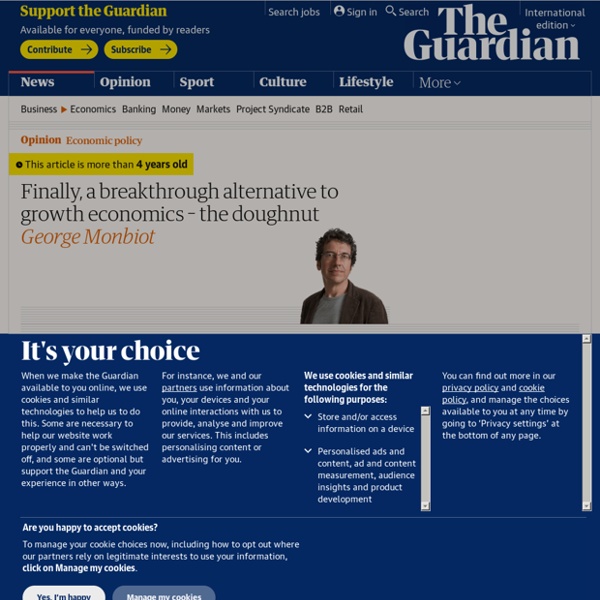 So what are we going to do about it? This is the only question worth asking. But the answers appear elusive. Faced with a multifaceted crisis – the capture of governments by billionaires and their lobbyists, extreme inequality, the rise of demagogues, above all the collapse of the living world – those to whom we look for leadership appear stunned, voiceless, clueless. Even if they had the courage to act, they have no idea what to do. The most they tend to offer is more economic growth: the fairy dust supposed to make all the bad stuff disappear. You can see the effects in a leaked memo from the UK’s Foreign Office: “Trade and growth are now priorities for all posts … work like climate change and illegal wildlife trade will be scaled down.” We cannot hope to address our predicament without a new worldview. Raworth points out that economics in the 20th century “lost the desire to articulate its goals”. The central image in mainstream economics is the circular flow diagram.

Related:  New Economic system/trends and new paradigms • "Resistance is futile, you will be assimilated." So what?

Best Lawyers For many years, banks have partnered with Fintech companies to offer online loans to consumers. Some of these bank partnerships have been challenged by consumer advocates through so-called “true lender” litigation in state and federal courts, by state regulators, and through criminal prosecutions. The crux of the true lender challenge is that, at the time a loan is originated, the lender on the face of the loan paper, the bank, is not the true lender. Rather, the true lender is the Fintech company that marketed and sold the financial product or service to the consumer. Ten ways we can build a better economic system For the numerous readers who asked: "But what can we do?" after reading my "10 reasons to smash capitalism," here are ten ways we can build a better economic system: 10. We can elect governments that represent people rather than corporations.

Chelsea Green Publishing - Doughnut Economics Economics is the mother tongue of public policy. It dominates our decision-making for the future, guides multi-billion-dollar investments, and shapes our responses to climate change, inequality, and other environmental and social challenges that define our times. Pity then, or more like disaster, that its fundamental ideas are centuries out of date yet are still taught in college courses worldwide and still used to address critical issues in government and business alike. Capitalism Is Not the Only Choice by Penn Loh Since the breakup of the Soviet bloc and China’s turn toward free markets, many economists have pronounced an “end of history,” where capitalism reigns supreme as the ultimate form of economy. Perhaps “there is no alternative” to a globalized neoliberal economy, as former British Prime Minister Margaret Thatcher often said. Indeed, free markets in which individuals compete to get what they can while they can are glorified in popular culture through reality shows such as Shark Tank. But many of us in the 99 percent are not feeling so happy or secure about this economy’s results.

Participatory Budgeting Is Gaining Momentum in the US. How Does It Work? It's tax season in the US. With the deadline looming to pay Uncle Sam less than a month away, many are wondering -- or grumbling -- about how their tax dollars are allocated in the first place. But now participatory budgeting, a concept in which citizens get to vote democratically on how a particular pot of public funds will be spent, has been gaining traction across the US over the last few years, and promising to give citizens a voice in these matters. The Participatory Budgeting Project (PBP), a nonprofit organization founded in 2009 that aims to "deepen democracy, build stronger communities and make public budgets more equitable and effective," is one of the most visible groups working with cities, communities, and schools to implement participatory budgeting processes (primarily in the US and Canada). Ginny Browne, a project manager at the Participatory Budgeting Project's Oakland office, spoke to Shareable about what her organization is doing to move the concept forward.

Canadian province trials basic income for thousands of residents Canada is testing a basic income to discover what impact the policy has on unemployed people and those on low incomes. The province of Ontario is planning to give 4,000 citizens thousands of dollars a month and assess how it affects their health, wellbeing, earnings and productivity. It is among a number of regions and countries across the globe that are now piloting the scheme, which sees residents given a certain amount of money each month regardless of whether or not they are in work. Although it is too early for the Ontario pilot to deliver clear results, some of those involved have already reported a significant change. One recipient, Tim Button, said the monthly payments were making a “huge difference” to his life.

Cooperative Economics: Replacing a Capitalism in Collapse (Image: Hands together via Shutterstock)Truthout is able to confront the forces of greed and regression only because we don’t take corporate funding. Support us in this fight: make a tax-deductible donation today by clicking here. I live in a co-op house with 30 other people in Madison, Wisconsin. While we pay rent to the nonprofit organization that manages Madison’s co-op properties, our only landlords are each other. We have weekly meetings to discuss house business and make decisions in a democratic process, using a consensus model. The economics of our future world Taking of moving from the concept of a Universal Basic Income to money without government to tokens to credits, I’ve been reading a fascinating book recently on Star Trek’s economics called Trekonomics. Released in 2016, I thought it would be some frivolous Trekkie’s drooling over the wonder of the Federation’s Galaxies but, instead, it is actually a pretty fundamental analysis of the possible economics of the future. I really enjoyed it and realised why I’m such a fan of Star Trek which is, fundamentally, that it portrays a Utopian vision of the future rather than a Dystopian vision. Star Wars is dystopian, where everyone is at war with everyone else; Star Trek is utopian, portraying a vision of tomorrow that is far more positive and optimistic. But, in tomorrow’s vision, no one pays for anything, no one has to work, everyone focuses upon the future and the betterment of humanity.

The Hidden Cost of Privatization While the business of business is business, the business of government is not. This piece points out that while there may be a role for public-private partnerships, not only are the cost savings doubtful, but their effect on the ends of government are extremely worrisome. Public-private partnerships conflate public and private interests, and in conflicts between them, the private interests win out. In the End of Laissez-Faire, Keynes posed what has become a central task of our time: determining the “agenda” of government, what it should do and not do. We must distinguish, as Keynes puts it, the “technically social services” from the “technically individual” ones. The technically individual services can be provided privately, and thus privatized if they are provided publically, whereas the technically social services cannot.

untitled I recently blogged about the Edelman Trust Barometer, which makes clear that technology firms are trusted the most and financial firms the least. This is misguided however, as we need to think about who trusts them with what. Consumers trust technology firms not to abuse their data? Reclaiming the Commons The United States is full of everyday commons management systems such as public libraries, the Internet, blood banks, and parks. Although commercial intrusion into previously public or “common” space is widespread, new efforts to preserve and expand what is held to be in the public domain have emerged in recent years. Three factors, in particular, have spurred this development: Environmentalists, and particularly those working to address global warming and declining open space, have revived the traditional idea of the environment as a common space;The emergence of an “information commons” made possible by the Internet and computer technology which focuses on protecting intellectual and creative freedom;Globalization, which has sparked interest in organizing to rebuild local public spaces and community networks that protect non-commodity values such as family time.

Related:
Related:  New Economic system/trends and new paradigms   -  "Resistance is futile, you will be assimilated." So what?