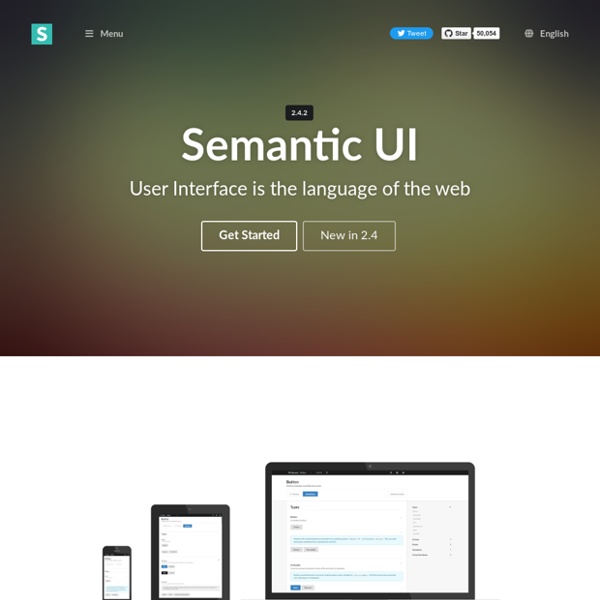 ie7-js - A JavaScript library to make MSIE behave like a standards-compliant browser. IE7.js is a JavaScript library to make Microsoft Internet Explorer behave like a standards-compliant browser. It fixes many HTML and CSS issues and makes transparent PNG work correctly under IE5 and IE6. Current version: 2.1 beta4. IE7.js Upgrade MSIE5.5-6 to be compatible with MSIE7. Hover.css - A collection of CSS3 powered hover effects All Hover.css effects make use of a single element (with the help of some pseudo-elements where necessary), are self contained so you can easily copy and paste them, and come in CSS, Sass, and LESS flavours. For best results, hover effects use a couple of "hacks" (undesirable but usually necessary lines of code). For more information on these hacks and whether you need them, please read the FAQ. Many effects use CSS3 features such as transitions, transforms and animations.

Creating 3D worlds with HTML and CSS by Keith Clark Last year I created a demo showing how CSS 3D transforms could be used to create 3D environments. The demo was a technical showcase of what could be achieved with CSS at the time but I wanted to see how far I could push things, so over the past few months I’ve been working on a new version with more complex models, realistic lighting, shadows and collision detection. This post documents how I did it and the techniques I used.

Semantic UI Progressive Truthfulness [Progressive truthfulness] is perhaps a better way to build models of physical objects...Start with a model that is fully detailed but only resembles what is wanted. Then, one adjusts one attribute after another, bringing the result ever closer to the mental vision of the new creation, or to the real properties of a real-world object ...Starting with exemplars that themselves have consistency of style ensures that such consistency is the designer's to lose. 15 Interesting JavaScript and CSS Libraries for March 2017 Danny Markov Our mission at Tutorialzine is to keep you up to date with the latest and coolest trends in web development. That’s why every month we release a handpicked collection of some of the best resources that we’ve stumbled upon and deemed worthy of your attention. Propeller Propeller is a CSS components framework based on Bootstrap and Google’s Material Design language. It includes 25 components made with responsiveness in mind and featuring the typical Material Design animations.

gudh.github iHover is an impressive hover effects collection, powered by pure CSS3, no dependency, work well with Bootstrap 3! Hover effect 1 <div class="row"><div class="col-sm-6"><! Template Villa - Wordpress Blog After receiving amazing reactions of his remarks already been released, the HTML is a simple web programming is all set to promote a web developer with version 6, which certainly left their mark on the market. This time HTML6 introduced the assembled namespaces, which is built on XML and HTML standard. The current version HTML6 is considered one of the most preferred and popular reflected changes in relation to other older versions.

The ultimate guide to Bootstrap Bootstrap is a powerful, mobile-first, responsive, front-end framework that’s built with CSS, HTML, and JavaScript. It offers a ton of advantages over starting from scratch, and even over many other frameworks. Bootstrap was originally developed by a designer and developer from Twitter, it’s become one of the most popular front-end frameworks in the world. It was first known as Twitter Blueprint, before becoming open-source, and served as Twitter’s internal style guide for over a year before it was released publicly. If you’re unfamiliar with Bootstrap, the resources and information here will get you up to speed. Why Bootstrap?

Next.js We're very proud to open-source Next.js, a small framework for server-rendered universal JavaScript webapps, built on top of React, Webpack and Babel, which powers this very site! The "Hello World" of Next.js To start using it, run inside a new directory with a package.json: $ npm install next --save $ mkdir pages Top 9 Animation Libraries to Use in 2016 The modern web is rife with amazing, eyeball-capturing motion. Today web developers use a wide array of techniques to engage, entertain, inform and direct their visitors and animation helps us in achieving that goal. A decade ago developers typically employed Adobe Flash to add interactivity to their sites, but with the rapid development of HTML5, CSS3 and a myriad JavaScript libraries, Flash has (thankfully?) taken a back seat.

Avalanche - Responsive, Sass-based, BEM-syntax CSS grid system Code quality Easy, flexible naming convention Avalanche gives you a choice of three naming conventions for your width class names: fraction (1/4), percentage (25) or fragment (1-of-4). No need to spend time working out how many columns are in your nested layout - if a cell needs to take up half the width of it's container, tell it to! Only create the classes you'll actually use You tell Avalanche which widths you require and it'll create just those ones for you, keeping your compiled CSS lean and free from bloat classes you'll never use.