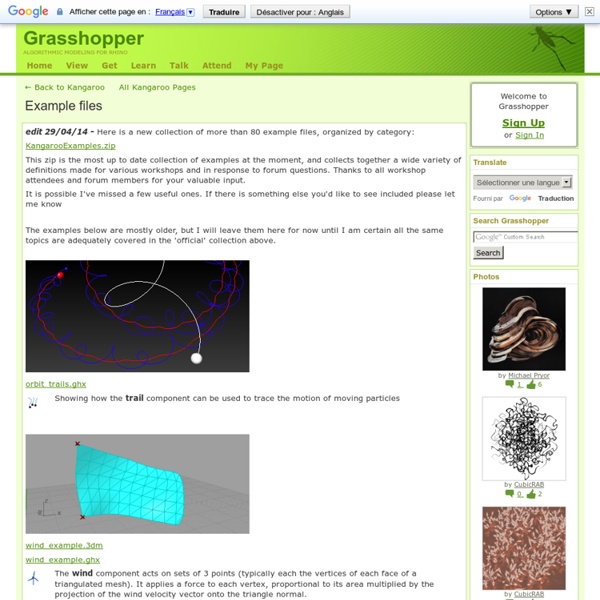 edit 29/04/14 - Here is a new collection of more than 80 example files, organized by category: This zip is the most up to date collection of examples at the moment, and collects together a wide variety of definitions made for various workshops and in response to forum questions. Thanks to all workshop attendees and forum members for your valuable input. It is possible I've missed a few useful ones. If there is something else you'd like to see included please let me know The examples below are mostly older, but I will leave them here for now until I am certain all the same topics are adequately covered in the 'official' collection above. Showing how the trail component can be used to trace the motion of moving particles The wind component acts on sets of 3 points (typically each the vertices of each face of a triangulated mesh). CurvePull - Pulls particles onto a curve. The Vortex component rotates one particle about an axis defined by 2 points. (also requires WeaverBird) drape_example.gh

Kangaroo discussions and examples from GH forum home about us contact sg2011 cluster: use the force The focal geometry of circular and conical meshes Abstract: Circular meshes are quadrilateral meshes all of whose faces possess a circumcircle, whereas conical meshes are planar quadrilateral meshes where the faces which meet in a vertex are tangent to a right circular cone. Both are amenable to geometric modeling – recently surface approximation and subdivision-like refinement processes have been studied. In this paper we extend the original defining property of conical meshes, namely the existence of face/face offset meshes at constant distance, to circular meshes. We study the close relation between circular and conical meshes, their vertex/ vertex and face/face offsets, as well as their discrete normals and focal meshes.

Tutorial 5 - Space frame In this tutorial we will look at how to generate a spaceframe. Although the beginning is quite straight forward , the difficulty arises when the top frame has to be defined. It tackles a typical problem with Grasshopper , the list and tree editing. Due to the fact that Grasshopper doesn't store object names but defines the geometry in an indexed list makes the selection of objects sometimes quite arduous. GH: DISTANCE GROUPING This definition groups objects into lists based on their distances from a point(s) 1. Set points as collectors (they will make the groups)2. Slingshot! GH+MySQL v0.6 Released A new version of the Slingshot GH+MySQL plug-in has been released. The release improves on the workflow for writing information to a MySQL table. A new Write Table component is included which allows the user to dynamically insert and update multiple columns of data.

Project Kangaroo – Live 3D Physics for Rhino/Grasshopper – update Here are some more videos of early tests of Kangaroo – the live physics engine for design modelling that I have recently started developing – and a bit more about its context and what it could be used for. One of the things it allows is the virtual use of some of the physical form-finding techniques for design that were pioneered by architects/engineers such as Frei Otto and Antoni Gaudí. They made use of a principle discovered by Robert Hooke : When a flexible chain hangs freely its elements are in pure tension, and when this form is flipped vertically it produces a form of pure compression, which is ideal for constructing masonry arches, an idea which can be extended to chain nets and stone vaults : Another area in which physics based form-finding has been important in architecture is in the design of lightweight and tensile structures such as cable-nets and fabric canopies. Kangaroo allows the relaxation of nets of arbitrary topology: I believe that fun need not mean frivolous.

grasshopper Posts Tagged ‘grasshopper’ Force Based Design Karamba was recently taught and utilized by Christian Heidenreich, Alexander Stahr and participants at the Bauhaus Summer School Workshop ‘Force Based Design’. This two-week interdisciplinary course aimed to lay the foundations of a „force based design“ through theoretical input lectures and presentations. AADRL 2013 – Algorithmic and Production Skills with Rhino + Grasshopper – Session 8: Genetic Algorithms » VITRUALITY In this session we will be looking at some more advanced components and methods of using grasshopper, principally focussing on Galapagos, Grasshopper’s built-in genetic algrithm solver. Along the way, we’ll also be examining Grasshopper’s metaball component and means of flow control – the Grasshopper equivalent of ‘if statements’ in coding. Example 7: Galapagos Galapagos is best used to solve problems to which the optimal solution is not immediately obvious.

Physics with Kangaroo Physics and Form-Finding with Kangaroo NOW AVAILABLE IN RECORDED STREAMING! Originally aired on 2013 September 23-24 + 27 Instructor Daniel Piker If you did not get the chance to attend a live session, here is your chance of reviewing this class. About Generative Design platforms by Mark Loomis (image from Bentley)This is a guest post from Mark Loomis First off, I want to thank Rodrigo Medina for graciously inviting me to guest post on his blog. I’m Mark Loomis, a landscape architect who first learned about generative design when I read this article by Angus Stocking about a year ago. Since then I’ve been learning all I can about it and this post is an encapsulation of my findings. I’ve also started my own company, called Parametric Concepts, in order to pursue this new design paradigm. I’m by no means an expert at any of it but my research has given me a pretty good overall view of what’s out there.