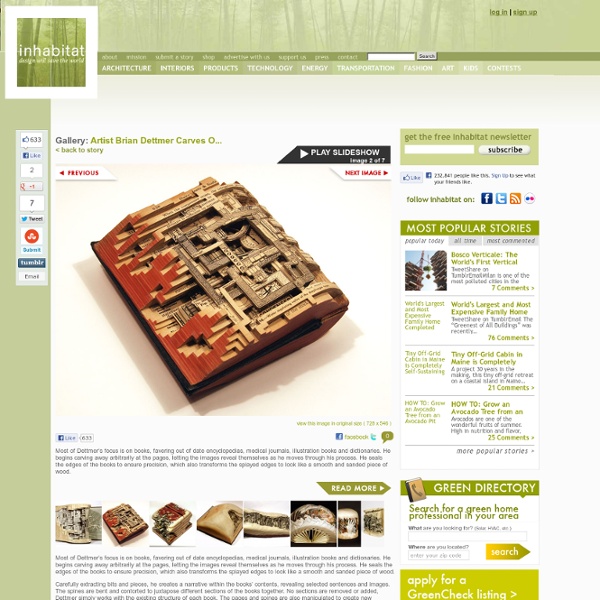 Most of Dettmer’s focus is on books, favoring out of date encyclopedias, medical journals, illustration books and dictionaries. He begins carving away arbitrarily at the pages, letting the images reveal themselves as he moves through his process. He seals the edges of the books to ensure precision, which also transforms the splayed edges to look like a smooth and sanded piece of wood. Carefully extracting bits and pieces, he creates a narrative within the books’ contents, revealing selected sentences and images. The spines are bent and contorted to juxtapose different sections of the books together. The resulting beautiful sculptures completely reinterpret the original intention of each book. Dettmer’s messages range from narrative to political, with spiral sculptures of butterflies from a lepidoptery journal, or a scene of layered illustrated animals from a children’s book. + Brian Dettmer

mental_floss Blog » The House of Blood Where is the house of blood? It could be your house with these home furnishings, most of which are available at the click of a mouse. Individually, they might be described as conversation pieces; put them all together and you'll have a house of horrors no one would want to visit twice. One of these products used the description "Gruesome, bloody, and absolutely offensive." This collection is not for the squeamish. Dining Room Designer Amy LauÂ was inspired by the serial killer show on Showtime when she came up with these Dexter dining room chairs. Lighting The Blood Bucket Lamp looks like it's pouring all over your desktop, but the blood is the stem and base. Lamp This Blood Lamp doesn't look that bloody, but the way you turn it on can be considered gruesome. Cutlery The Bloody Kitchen Knife is food safe, except when someone comes into the kitchen and sees you use it! Coffee Set How about a 14-piece Bloody Coffee Set, complete with drops and smears? Table Linen Table Candles Shower Curtain

Books Transformed Into Visual Art - Green Diary Origami artists have been transforming paper into varied, visually striking works of art since centuries. However, an entirely different wagon of artists has stretched it across the paper and is creating the same magic with books. Had these books not been morphed into unusual artworks, you might have seen them bedecking some landfill, a ditch or a waste-bin. Who knows? Anyhow, after passing through some skilled hands, they have gotten more appealing than they were ever. Since seeing is believing, hit the jump to see a full list of book art awaiting your approval: Anagram Bookshop (Prague) promotional images from Kaspen deserve a glance for sure. Known as Robert The, the Kingston-based artist outshines all. Brian Dettemer is one of the masters of this weirdly green art. Casey Curran etches his art on books with a scissor. UK artist S. Lucille Moroni works with 19th century church books and missals to create art. Folded books by Denise Kiggan are just incredible!

What Does Love Mean to a Four-Year-Old? | John Mark Ministries A group of professional people posed this question to a group of 4 to 8 year-olds, “What does love mean?” The answers they got were broader and deeper than anyone could have imagined. See what you think: “When my grandmother got arthritis, she couldn’t bend over and paint her toenails anymore. So my grandfather does it for her all the time, even when his hands got arthritis too. That’s love.” “When someone loves you, the way they say your name is different. “Love is when a girl puts on perfume and a boy puts on shaving cologne and they go out and smell each other.” “Love is when you go out to eat and give somebody most of your French fries without making them give you any of theirs.” “Love is what makes you smile when you’re tired.” “Love is when my mommy makes coffee for my daddy and she takes a sip before giving it to him, to make sure the taste is OK.” “Love is when you kiss all the time. “Love is what’s in the room with you at Christmas if you stop opening presents and listen.”

Sagaki Keita (click images for detail) Artist Sagaki Keita was born in 1984 and lives and works in Tokyo. His densely composited pen and ink illustrations contain thousands of whimsical characters that are drawn almost completely improvised. I am dumbstruck looking at these and love the wacky juxtaposition of fine art and notebook doodles. Amazing Book Art of Robert The on DesignRulz They’re still books – only a bit changed. All these books were transformed into visual art, but still they’re books. American artist and a mathematician with a strange name, Robert The makes bizarre creations from books for many years. 15 Bizarre Buildings Architecture can amaze us in so many ways. There are structures that can make our jaw drop because of their beauty while others are so grandiose to look at. They are also usually those kind of buildings that convince us to take a double-take on our camera. They look strange, silly, weird, and sometimes, funny. These are the structures that challenge our vision and trick our mind, each time we take another look at them; it takes us back to the awe that architecture always manages to convey. Here are 15 buildings that will surely get a double-take once you get around them. 1. Image Image The Dancing House is found in Prague, Czech Republic. The unique design of a bent building was very nontraditional during their time and took a lot of criticism from the public. Its original name was supposed to be Fred and Ginger, after the famous dancers Fred Astaire and Ginger Rogers. Source 2. Image Image The Crooked House is a very unusual house found in Sopot, Poland. Source 3. Image Image Source 4. Image 5.

Ceramic artworks by Eva Funderburgh Eva Funderburgh is a ceramic artist located in Seattle, Washington. Coming from an education in chemistry and sculpture, she has focused herself on making strange whimiscal clay creatures. She works on exploring the colors natural to the clay and the finishing process of woodfire, and strives to present creatures that equally mix whimsy, mischief, and threat. Official website Facebook You might also like Comments Michael Dachstein Inspiration junkie :)

The Blue And The Green Email No matter how strongly you want to believe you are seeing blue and green spirals here, there is no blue color in this image. There is only green, red and orange. What you think is blue is actually green. You can check this through Photoshop or by zooming, if you need an affirmation. If you don’t believe your eyes, check this image enlarged: Care to pop in to my new project todayilearned.co.uk, a blog about unusual and interesting things. Discovered on Akiyoshi Kitaoka’s site Leave your comment: You may also like these posts: Moleskine Sketches By Trevor Henry Pages from the Moleskine of Canadian illustrator and designer Trevor Henry. Trevor started sketches in late 2008 when he first discovered the wonder of the Moleskine sketchbook. See the rest at Trevor’s website or Behance. Find this post useful? Check out these:

Unique Steampunk Insects Since the late 1990′s style steampunk is becoming more and more popular, and not only in the literature. Various modern utilitarian objects have been modded by enthusiasts into a pseudo-Victorian mechanical “steampunk” style. And often this stylization gives very unexpected results.