UW professor: The information war is real, and we’re losing it 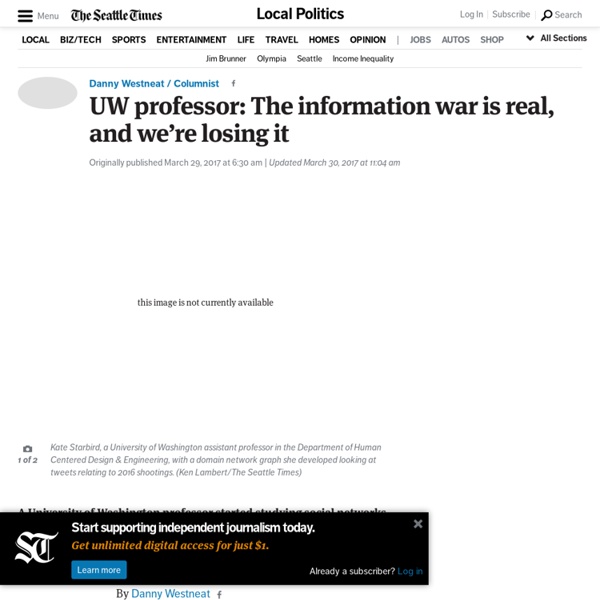 A University of Washington professor started studying social networks to help people respond to disasters. But she got dragged down a rabbit hole of twitter-boosted conspiracy theories, and ended up mapping our political moment. It started with the Boston marathon bombing, four years ago. Too strange for a university professor to take seriously. “There was a significant volume of social-media traffic that blamed the Navy SEALs for the bombing,” Starbird told me the other day in her office. Same thing after the mass shooting that killed nine at Umpqua Community College in Oregon: a burst of social-media activity calling the massacre a fake, a stage play by “crisis actors” for political purposes. “After every mass shooting, dozens of them, there would be these strange clusters of activity,” Starbird says. “That was a terrible mistake. Starbird is in the field of “crisis informatics,” or how information flows after a disaster. It happens after every mass shooting or attack. Starbird sighed. Related:  Week 10: Credibility/Authority (*=Key reading) • COLLECTION: Media Literacy and Fake News

*Retraction Watch - Tracking retractions as a window into the scientific process (Scan a few recent posts) 14 Ways K–12 Librarians Can Teach Social Media by Joyce Valenza This is the best time in history to be a teacher-librarian. Major shifts in our information and communication landscapes present new opportunities for librarians to teach and lead in areas that were always considered part of their role, helping learners of all ages effectively use, manage, evaluate, organize and communicate information, and to love reading in its glorious new variety. A school’s teacher-librarian is its chief information officer, but in a networked world, the position is more that of moderator or coach, the person who ensures that students and teachers can effectively interact with information and leverage it to create and share and make a difference in the community and beyond. For background, take a look at the Standards for the 21st Century Learner. These information-fluency standards scream inquiry, critical thinking, digital citizenship, creative communication, collaboration, and networking. 7. Here are some examples" 10.

Google asks the dumbest questions | The Outline Google has a new ad for its latest smartphone, the Pixel 2, and it’s all over TV. “When you change a period to a question mark,” says text on a screen, “It changes everything.” Then, the period becomes a question mark: “It changes everything?” The implication is that Google, “a company built on questions,” is questioning conventional wisdom about the limitations of smartphones, and the result is the fabulous Pixel 2. This might seem like a benign question if Google itself wasn’t completely terrible at accurately answering such queries. Google’s ad for the Pixel 2. Not too long ago, Google unwittingly proclaimed the Earth was flat. "Here are 10 'proofs' that the Earth is actually flat, not round,” read the answer highlighted at the top of Google’s search results, attributed to Metro News. If you asked the same question of Google using its voice assistant, the answer was shortened to, “According to Metro, our planet isn’t a sphere, but instead a sort of pancake thing.” Dear me, @Google .

*Evaluate: Assessing Your Research Process and Findings | The Information Literacy User’s Guide: An Open, Online Textbook Introduction In 2010, a textbook being used in fourth grade classrooms in Virginia became big news for all the wrong reasons. The book, Our Virginia by Joy Masoff, had caught the attention of a parent who was helping her child do her homework, according to an article in The Washington Post. Carol Sheriff was a historian for the College of William and Mary and as she worked with her daughter, she began to notice some glaring historical errors, not the least of which was a passage which described how thousands of African Americans fought for the South during the Civil War. Further investigation into the book revealed that, although the author had written textbooks on a variety of subjects, she was not a trained historian. How did a book with errors like these come to be used as part of the curriculum and who was at fault? The Evaluate pillar states that individuals are able to review the research process and compare and evaluate information and data. They understand They are able to Books

Facebook steps up fake news fight with 'Related Articles' - Aug. 3, 2017 The social network on Thursday began rolling out "Related Articles" that provide additional perspectives and information on stories shared on News Feeds. The Future of Truth and Misinformation Online Experts are evenly split on whether the coming decade will see a reduction in false and misleading narratives online. Those forecasting improvement place their hopes in technological fixes and in societal solutions. Others think the dark side of human nature is aided more than stifled by technology. In late 2016, Oxford Dictionaries selected “post-truth” as the word of the year, defining it as “relating to or denoting circumstances in which objective facts are less influential in shaping public opinion than appeals to emotion and personal belief.” The 2016 Brexit vote in the United Kingdom and the tumultuous U.S. presidential election highlighted how the digital age has affected news and cultural narratives. This makes many vulnerable to accepting and acting on misinformation. Misinformation is not like a plumbing problem you fix. The question arises, then: What will happen to the online information environment in the coming decade? Michael J. Subtheme: More people = more problems. J.

School Librarians Are Teaching Digital Citizenship April Wathen photo: Jill Springer April Wathen, Kathy Lester, and Steven Yates. As technology and social media play an increasingly big role in the classroom, educators are faced with challenges of teaching students how to use technologies in appropriate ways, and how to be safe and responsible online—the basic tenets of what is known as digital citizenship, a close relative of digital literacy. Fortunately, classroom teachers often have an expert ally to assist them in getting the job done: their school librarian or media specialist. When educator Mike Ribble first started writing about digital citizenship in the early 2000s, the term was unfamiliar to many people. Though our nation has been riding a wave of technological advances for several decades, educational standards incorporating technology education have not always kept pace. Marchesano describes digital citizenship as “trying to make sure our students are responsible, safe, and ethical users and creators of information. 1. 2.

E.S.C.A.P.E. Junk News - NewseumED GRADE LEVEL: Middle and high school TIME: 30-60 minutes MATERIALS: E.S.C.A.P.E. Make copies of the E.S.C.A.P.E. Facebook, Google and others join The Trust Project, an effort to increase transparency around online news “Fake news” and other misinformation, online propaganda, and satirical content people believe is true have filled the web via search engines and social media, and have caused a rift in how people perceive today’s news organizations and the quality of their coverage. A nonpartisan effort called The Trust Project is working to address this situation by helping online users distinguish between reliable journalism and promotional content or misinformation. Today, a key part of that effort – called “Trust Indicators” – are going live on Facebook, offering easy-to-access, transparent information about a news organization’s ethics and practices. Here’s how this will work in practice: starting today on Facebook, an icon will appear next to articles in the News Feed. Facebook, Google, Bing and Twitter have all committed to displaying these indicators, though not all implementations are yet live. These are as follows: Best Practices: What Are Your Standards? Featured Image: Thomas Faull/Getty Images

*IFLA -- Real Solutions to Fake News: How Libraries Help Skip to main content You are here: Home » Activities and Groups » Information Society » News » Real Solutions to Fake News: How Libraries Help Search form 20 August 2017 From the Annual Conference Real Solutions to Fake News: How Libraries Help Русский | Español | Deutsch | 简体中文 | français | العربية Freedoms of access to information and expression online are at risk. For IFLA, neither of these solutions is desirable. IFLA’s infographic has been a big success. The Library of the Finnish Parliament introduced the infographic at the Parliament “Committee of the Future” meeting, and it has featured in a number of articles and essays. In Vietnam, library instructors at the University of Danang used the infographic to impart information literacy classes and share the risks associated with the inability to recognize a piece of news as fake. In Sweden, librarians exhibited translations of the poster in Swedish, English, Arabic, and Romanian at maker party events. List all IFLA news

How to Protect Students From Fake News For those raised in the information age, life without the internet is no life at all. It is often a primary focus of a teen’s day (75% of teens are online several times per day) and an important means by which they communicate with the world and take in new information. While information can be found in various sources across the internet, an overwhelming majority of teens and pre-teens tend to gather their information from social media sites like Facebook and Twitter. A 2015 report by the Media Insights Project found that the majority of surveyed Millennials (aged 18-34) cited Facebook as their sole or primary source of key news and other information. Unfortunately, Facebook is not known as a credible source for news. The recent outbreak of “fake news” has hit social media sites particularly hard, as these types of platforms are set up to propagate information at record speed regardless of source or content. Why Fake News is Dangerous How to Spot Fake News Further Reading

It’s time to stop trusting Google search already | The Verge Last weekend, in the hours after a deadly Texas church shooting, Google search promoted false reports about the suspect, suggesting that he was a radical communist affiliated with the antifa movement. The claims popped up in Google’s “Popular on Twitter” module, which made them prominently visible — although not the top results — in a search for the alleged killer’s name. Of course, the was just the latest instance of a long-standing problem: it was the latest of multiple similar missteps. As usual, Google promised to improve its search results, while the offending tweets disappeared. But telling Google to retrain its algorithms, as appropriate as that demand is, doesn’t solve the bigger issue: the search engine’s monopoly on truth. Surveys suggest that, at least in theory, very few people unconditionally believe news from social media. Google encourages this perception, as do competitors like Amazon and Apple — especially as their products depend more and more on virtual assistants.

PolitiFact's guide to fake news websites and what they peddle At first look, BostonTribune.com certainly seems a trustworthy source. So does KMT11.com. And ABCNews.com.co. Even 24wpn.com has an official ring to it. But all of these websites peddle bogus stories, either by making up fake news or sharing it from other sources. Since December, we at PolitiFact have been partnering with Facebook to root out fabricated reports shared by social media users. It’s also difficult to determine where these fictional stories come from, and just how they spread across the Internet. Using our experiences, we've been able to create our own fake news almanac. This is by no means a complete list of offenders. Some websites just want you to click on their pages to generate advertising revenue. We’ve broken the websites on our list down into four broad categories, marked by specific aims and methods for generating or sharing fake news. Parody or joke sites It can be difficult to parse what the aims of these parody sites may be. Politicono.com is not alone.