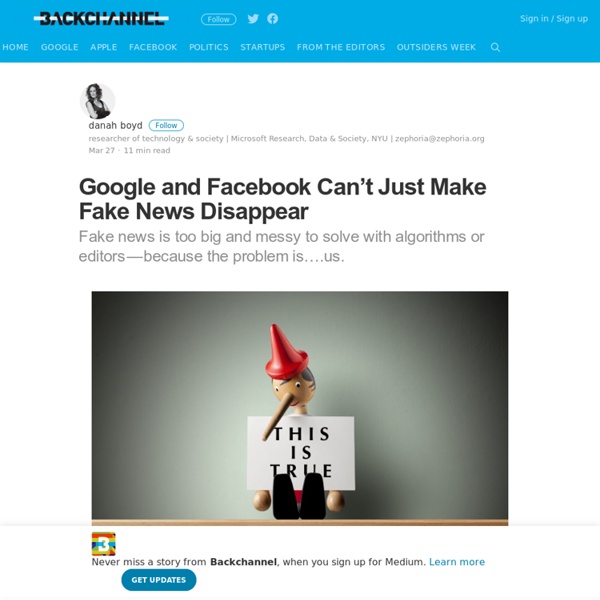 Increasingly, I’m frustrated by (and often antagonistic toward) the emergent narrative about how to address so-called “fake news.” My anger is growing, not only because as I write this I’m almost 10 months pregnant and grouchy, but also because I see the possibility of well-intended interventions backfiring. I understand why folks want to do something now — there’s a lot of energy in this space, and the underlying issues at play have significant consequences for democracy and society. Yet what’s happening at this present moment is not actually new. It’s part of a long and complicated history, and it sheds light on a variety of social, economic, cultural, technological, and political dynamics that will not be addressed through simplistic solutions. Racing to implement Band-Aids may feel good, but I worry that such an approach creates a distraction while enabling the underlying issues to flourish. Follow Backchannel: Facebook | Twitter What is “Fake News?” Problematic Solutionism

Inside The Fake News Fight At Apple, Snapchat, Facebook, And More Since the 2016 presidential election, it’s become clear that fake news could have impacted the result. And social media was its perfect enabler–built for the rapid sharing of articles that aren’t necessarily even read, and designed to validate quack sites with the same design treatment as the New York Times. But everyone makes mistakes. The question now isn’t whether fake news swayed the election. How “News Literacy” Gets the Web Wrong I have a simple web literacy model. When confronted with a dubious claim: Check for previous fact-checking workGo upstream to the sourceRead laterally That’s it. There’s a couple admonitions in there to check your emotions and think recursively, but these three things — check previous work, go upstream, read laterally — are the core process. We call these things strategies.

Google Should Be a Librarian, not a Family Feud Contestant I’ve been investigating Google snippets lately, based on some work that other people have done. These are the “cards” that pop up on top sometimes, giving the user what appears to be the “one true answer”. What’s shocking to me is not that Google malfunctions in producing these, but how often it malfunctions, and how easy it is to find malfunctions. It’s like there is little to no quality control on the algorithm at all. Other people have found dozens of these over the past couple days, but here’s a few I found goofing off yesterday while half watching Incorporated on Syfy. Prodded with the right terms, Google will tell you that:

The Mark Zuckerberg Manifesto Is a Blueprint for Destroying Journalism It’s not that Mark Zuckerberg set out to dismantle the news business when he founded Facebook 13 years ago. Yet news organizations are perhaps the biggest casualty of the world Zuckerberg built. There’s reason to believe things are going to get worse. A sprawling new manifesto by Zuckerberg, published to Facebook on Thursday, should set off new alarm bells for journalists, and heighten news organizations’ sense of urgency about how they—and their industry—can survive in a Facebook-dominated world.

‘Who shared it?’ How Americans decide what news to trust on social media Published This research was conducted by the Media Insight Project — an initiative of the American Press Institute and the Associated Press-NORC Center for Public Affairs Research Introduction Getting Out of the Filter Bubble: Finding The Real You Online I recently had a great (and timely) conversation with one of the counselors from International School Manila at the EARCOS Teacher’s Conference in Kota Kinnabalu, Malaysia (check out all the resources from all of my sessions here). She said: “I wish there was a way to help students recognize what their online profile looks like to other people. They often think what they’re posting is great, but it can be hard for them to view it through someone else’s eyes.”

Renewing Medium’s focus – 3 min read We’ve decided to make some major changes at Medium. I’ll start with the hard part: As of today, we are reducing our team by about one third — eliminating 50 jobs, mostly in sales, support, and other business functions. We are also changing our business model to more directly drive the mission we set out on originally. Obviously, this is a tough thing to do, made tougher by the immense respect and love we have for these people who have helped make Medium what it is today. We reached this decision when Medium’s management team came together to review the last year and take a hard look at our business — where we are and where we’re headed. While we could continue on our current path — and there is a business case for doing so — we decided that we risk failing on our larger, original mission if we don’t make some proactive changes while we have the momentum and resources to do so.

3 Fast, Free Lesson Plans to Fight Fake News The fake news epidemic is disturbing. How do we fight it? Well, we can take a hint from how the medical community fights the flu or any other virus. We inoculate ourselves. In this post, I’ll teach you how I teach about fake news. Is Facebook a partner or a competitor for media companies? Yes. As has been rumored for some time, Facebook launched a trial project called "Instant Articles" on Wednesday morning—a partnership with nine news organizations, including The New York Times, The Guardian, BuzzFeed, and National Geographic. Under the terms of the deal, entire news stories from those partners will appear inside Facebook's mobile app and be able to be read there, as opposed to the traditional practice of news publishers posting an excerpt and a link to their website. At first blush, this sounds like a pretty straightforward exchange of value.

Will we now take information literacy skills seriously? I keep having to bite my tongue a lot late from muttering, "People are idiots." I am sure many are doing the same when they look at me. But there you are. The recent brouhaha over the term "alternate facts" makes it seem like everything people have been reading in the media and online has been true up until Trump was elected president. Librarians have always known better. Facebook's move into publishing is 'dangerous, but interesting' In March of this year the New York Times revealed that Facebook was in talks with a dozen or so publishers including Buzzfeed and National Geographic to host their content directly on the platform, a move that Tiffanie Darke, commercial content director at News UK has deemed “dangerous, but interesting.” Speaking to The Drum, Darke, who is serving as a judge at this year’s The Drum Content Awards, hailed the partnership as the biggest milestone in the world of content of the last 12 months. The idea behind the move is that publishers’ content would load quicker – particularly on mobile – inside Facebook’s platform. However, a lack of control has been cited by many publishers as a sticking point, not least by Darke’s own colleague, News UK chief marketing officer, Chris Duncan who previously told The Drum publishers handing their content to sites like Facebook to distribute freely was an act of ‘vanity’.

You are the new gatekeeper of the news News consumers today face a flood of fake news and information. Distinguishing between fact and fiction has become increasingly challenging. In the past, news organizations sifted through information to try to determine its validity and veracity.