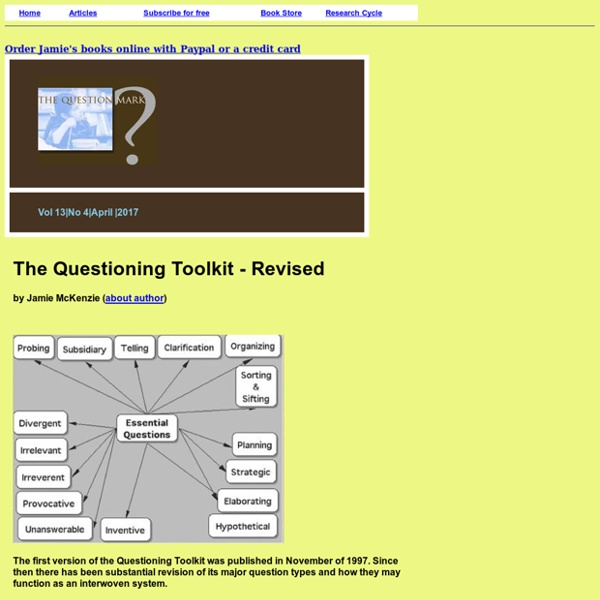 The first version of the Questioning Toolkit was published in November of 1997. Since then there has been substantial revision of its major question types and how they may function as an interwoven system. This article takes the model quite a few steps further, explaining more about each type of question and how it might support the overall investigative process in combination with the other types. photo ©istockphoto.com Section One - Orchestration Most complicated issues and challenges require the researcher to apply quite a few different types of questions when building an answer. Orchestration is the key concept added to the model since its first version. orchestrate: To combine and adapt in order to attain a particular effect: arrange, blend, coordinate, harmonize, integrate, synthesize, unify. As the researcher moves beyond mere gathering to discovering and inventing new meanings, the complexity and the challenge of effective orchestration grows dramatically. --- Essential Questions ---

Game of Awesome / Teaching & learning resources / Success for Boys - Success for Boys Game of Awesome is a card game for 3-6 players designed to engage and inspire kids, specifically boys, to tell stories and learn to write. Playing the game helps students generate ideas quickly which they can explore, expand and write stories. The basic game has been produced as four sets of cards containing topics, themes and ideas that students years 5-8 will find interesting, involving and often ridiculous! The cards can be used independently or mixed and matched to create new combinations and infinitely more ideas.

The Critical Thinking Skills Cheatsheet [Infographic] Critical thinking skills truly matter in learning. Why? Because they are life skills we use every day of our lives. Everything from our work to our recreational pursuits, and all that’s in between, employs these unique and valuable abilities. Consciously developing them takes thought-provoking discussion and equally thought-provoking questions to get it going. Control Alt Achieve: Black Out Poetry with Google Docs March 21st is World Poetry Day, so this is a good time to revisit some ideas for creative ways for students to write poems. In the past I have shared activities for Random Writing Prompts for Poems, as well as drag-and-drop "magnetic" poetry templates in a Winter Theme and a Valentine's Day Theme. Another fun way to engage students in poetry is by having them create "Black Out" poems. Basically you give the student a page of text pulled from a book, article, websites, or such. The student then blacks out all of the text, except for the words they want to leave behind to form a poem.

Top 40+ questions to ask before embarking on any change Organizational change management checklist Change management: why, how, what, when, who Companies increasingly face competitive pressures related to rapid and continuous adaptation to a complex, dynamic and highly interconnected global environment. When embarking on a change journey – what questions to ask A Summary and Analysis of the ‘Rumpelstiltskin’ Fairy Tale A curious introduction to a classic fairy story How old do you think the story of Rumpelstiltskin is? It was famously included in the 1812 volume Children’s and Household Tales by the Brothers Grimm (a book that’s better known as Grimms’ Fairy Tales), but many of the tales written down by the German siblings were of a considerable vintage by then. The surprising thing is that the story of Rumpelstiltskin – albeit under a different name – is thought to be some 4,000 years old. To put that in perspective, that’s over a thousand years before Homer, and roughly contemporaneous with the earliest surviving versions of the tales that comprise the Epic of Gilgamesh, widely regarded as the oldest epic.

How memories form and how we lose them - Catharine Young Memory: It isn’t just something, it's everything. And although scientists have pursued and puzzled over it for centuries, a definitive explanation of the actual memory process still eludes us--partly because our brain is so incredibly complex (it is made up of approximately 90 billion cells after all!). Let’s take a look at the basic neuroanatomy elements, which makes memory possible. Brain cells, called neurons are the core component of the nervous system and have the remarkable ability to communicate with each other and transfer information.

@mrocallaghan_edu image via @gapingvoid Challenge (includes differentiation) Explanation Fallacy List 1. FAULTY CAUSE: (post hoc ergo propter hoc) mistakes correlation or association for causation, by assuming that because one thing follows another it was caused by the other. example: A black cat crossed Babbs' path yesterday and, sure enough, she was involved in an automobile accident later that same afternoon. example: The introduction of sex education courses at the high school level has resulted in increased promiscuity among teens. A recent study revealed that the number of reported cases of STDs (sexually transmitted diseases) was significantly higher for high schools that offered courses in sex education than for high schools that did not. 2.

Check Out These Clever LEGO Adaptations of Famous Works The Literacy Site By The Literacy Site LIT_Blog_DTOP_BelowTitle_336x280 A quick guide to attachment theory Attachment theory was developed by John Bowlby, a British psychologist, partly as a result of the experience of hundreds of thousands of children during the second world war who were separated from their parents and evacuated to safer areas of the UK. His work on the importance of parent-infant bonds revolutionised childcare around the world. Attachment theory has moved on considerably since its early days: it is rare nowadays to focus solely on mothers and babies. Although the ideas underpinning it connect with all aspects of social care, this article is intended primarily for social workers and others working with children and families.