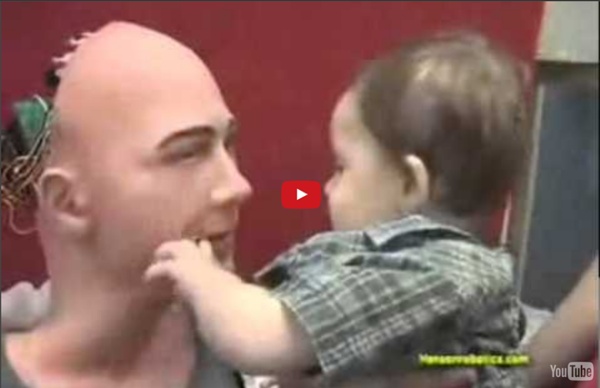 HERB the robot butler takes part in Oreo cookie challenge HERB brandishes a knife in a futile attempt to separate cookie from creme Image Gallery (9 images) The dream of an intelligent robot butler that can do the household chores may still be decades away, but a team of roboticists at Carnegie Mellon University's Robotics Institute is doing their part to make it a reality. HERB – the Home Exploring Robotic Butler – is one of dozens of robots to come out of CMU's Personal Robotics lab, and its latest trick is separating Oreo cookies in a response to Nabisco's Cookie vs. Creme challenge. View all HERB, which speaks with a synthetic British accent and looks related to the Mars rover, started off as a Segway-powered one-armed bandit that could locate and grasp coffee mugs or open kitchen cabinets. Food giant Nabisco's marketing stunt, which tasks inventive people with too much time on their hands to build an Oreo-separating machine, seemed like a good opportunity to put HERB's sensing and manipulation capabilities to the test. About the Author

Meet Geminoid F, a Smiling Female Android UPDATE2: Just added more photos and a video of the android. UPDATE: Ishiguro just told me that they won't be able to provide "any private information on the model" who served as the template for Geminoid F and that her identity will be kept "confidential." Photo: Osaka University Japanese roboticist Hiroshi Ishiguro unveiled today his latest creation: a female android called Geminoid F. The new robot, a copy of a woman in her twenties with long dark hair, can smile, frown, and change facial expressions more naturally than Ishiguro's previous androids. Ishiguro, a professor at Osaka University, is famous for creating a robot replica of himself, the Geminoid HI-1, a telepresence android that he controls remotely. In a press conference in Osaka, Ishiguro demonstrated how the android could mimic the facial expressions of the woman as she sat in front of a computer with cameras and face-tracking software. Here's a video I put together: Photos: Osaka University

BBC World Service - Special Reports - How the internet changed my life This crime-predicting robot aims to patrol our streets by 2015 Not quite as intimidating as RoboCop or ED-209 – CNET takes a look at the hi-tech future of law enforcement: A scene in the 2004 film "I, Robot" involves an army of rogue NS-5 humanoids establishing a curfew and imprisoning the citizens of Chicago, circa 2035, inside their homes. That's not how Knightscope envisions the coming day of deputized bots. (Credit: Knightscope) Kevin O'Donnell, a spokesman for the Service Employees International Union's Stand for Security campaign that handles disputes of this nature, doesn't place any blame on Knightscope or the K5 for potential displacement of security guard workers down the line due to automation.

Robot toddler could unlock secrets of human development Robotics, neuroscience, developmental psychology, and machine learning have converged in a new project led by University of California San Diego researchers. Meet Diego-san, a robotic one-year-old that “learns” to move and interact the same way a real baby does — by watching you. Besides bringing us that much closer to the uncanny valley, Diego-san is also providing a deeper understanding of sensory motor and social intelligence in children. Diego-san stands about 4 feet 3 inches tall and weighs 66 pounds. As reported by science website Phys.org: The robot is a product of the “Developing Social Robots” project launched in 2008. Creepy as this science might seem, researchers hope it will provide new insights into the study of infant development and help us better understand developmental disorders such as autism. The video below is the first of Diego-san to be publicly released, showing its robotic head moving through facial expressions it has learned from the humans around it.

When we mourn the passing of Prince but not 500 migrants, we have to ask: have we lost all sense of perspective? | Voices | The Independent Has something gone adrift within the moral compass of our ‘news’ reporting? In the past week, 64 Afghans have been killed in the largest bomb to have exploded in Kabul in 15 years. At least 340 were wounded. The Taliban set off their explosives at the very wall of the ‘elite’ security force – watch out for that word ‘elite’ – which was supposed to protect the capital. Whole families were annihilated. But Prince also died this week. Now Afghanistan is the country to which we and our EU partners are happily returning refugees on the grounds that Kabul and its surrounding provinces are “safe”. There was another story on Afghan television last week, which carried its own dark implications for the future. Loaded: 0% Progress: 0% Drone video shows levels of devastation in Homs, Syria Then there was the latest Mediterranean catastrophe. Because Prince died this week. Migrants' desperate boat journeys to Europe But this will not happen.

Eliza, Computer Therapist Let's talk about your feelings. The original ELIZA first appeared in the 60's. She seems almost human. This example of artificial intelligence works best, however, if you limit your conversation to talking about yourself and your feelings. To copy the dialog, you can download Screenpresso or use an app for Google Crome, IE or Foxpro called FireShot Screen Capture Note: Eliza is still learning! Eliza is a creation of Weizenbaum 1966-2008.

Hajime Sakamoto takes a ride on giant robot legs Have you ever dreamed of what it would be like to pilot a giant robot? If you have, you're not alone. A roboticist by the name of Hajime Sakamoto dreams of building his very own Gundam mobile suit, and he's making progress on a real 4 meter (13 feet) tall bipedal robot that can carry him around. So far the legs have been completed, and you can watch them stand up and take a few steps in the video below. View all Unlike the Kuratas, which was built by an iron working artist and moves on wheels, Sakamoto's robot is the real McCoy. His ambitious 4 meter (13 feet) tall robot will eventually be outfitted with an upper body, if he can secure the necessary funding. If you tilt your head to the side, you can see it taking a few steps in this video, piloted by Hajime Sakamoto himself: Toyota i-foot While we may not see them on every street corner just yet, bipedal robot vehicles have been in development for many years. KAIST Hubo Lab HUBO FX-1 fuRo Core