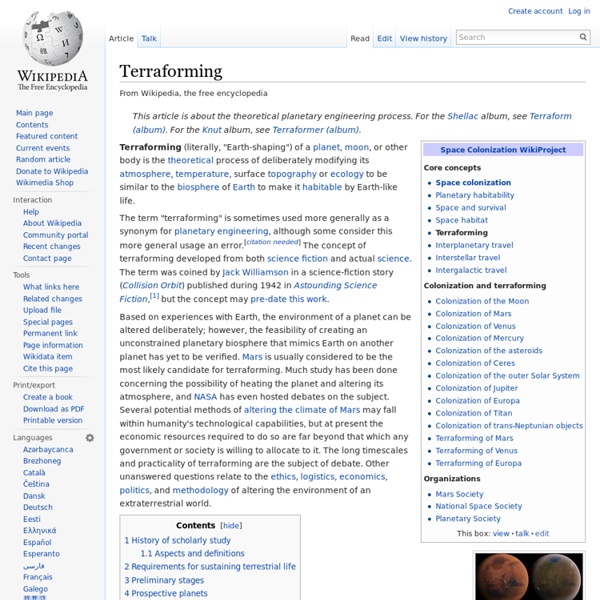 An artist's conception shows a terraformed Mars in four stages of development. Terraforming (literally, "Earth-shaping") of a planet, moon, or other body is the theoretical process of deliberately modifying its atmosphere, temperature, surface topography or ecology to be similar to the biosphere of Earth to make it habitable by Earth-like life. The term "terraforming" is sometimes used more generally as a synonym for planetary engineering, although some consider this more general usage an error.[citation needed] The concept of terraforming developed from both science fiction and actual science. The term was coined by Jack Williamson in a science-fiction story (Collision Orbit) published during 1942 in Astounding Science Fiction,[1] but the concept may pre-date this work. History of scholarly study[edit] In March 1979, NASA engineer and author James Oberg organized the First Terraforming Colloquium, a special session at the Lunar and Planetary Science Conference in Houston. Mars[edit] Related:  aesichirollo • Story Idea Research

Space Colonization Space colonization (also called space settlement, or extraterrestrial colonization) is permanent human habitation that is not on Earth. Many arguments have been made for space colonization. The two most common ones are survival of human civilization and the biosphere from possible disasters (natural or man-made), and the huge resources in space for expansion of human society. However right now the challenges, both technological and economic, involved in building a space colony are as great as the potential payoff. Space settlements would have to provide for all the material needs of hundreds or thousands of humans in an environment out in space that is very hostile to human life. They would involve technologies, such as closed-loop life support systems, that have yet to be developed in any meaningful way. There have been no space colonies built so far, nor are there any governments or large-scale private organizations with a timetable for building any. Reasons[edit] J. Goals[edit]

14 Must-Read Books for Activists | Institute for Humane Education The content that follows was originally published on the Institute for Humane Education website at We become activists when we learn about an issue or challenge and are inspired to take positive action. Teenager Natalie Warne learned about child soldiers when she watched a documentary in class. She was inspired to become an intern for Invisible Children and help get an important law passed. Economist Muhammad Yunus was inspired to develop a microlending program when he saw how little money it took to raise many of the people in his village out of poverty. Fortunately, there are numerous resources we can turn to for inspiration and help. ~ Marsha Image courtesy of 05com via Creative Commons.

Holography in fiction From Wikipedia, the free encyclopedia Holography is often used as a plot device in science fiction. However, very often, sci-fi movies and TV shows incorrectly present different 3D-projection technologies as "holography". In science fiction books[edit] The Carpathian Castle (1893 novel by Jules Verne), the plot revolves around prima donna La Stilla, represented at the times of the events as a projected image.Hello America (1981 book by J.G. Ballard), holographic technology is used by president Charles Manson to scare nomad peoples along the United States of America, showing images of American pop culture icons such as Gary Cooper, Mickey Mouse, or the Enterprise space ship.En Iniya Iyanthira (1980s novel by Sujatha Rangarajan), a character named Jeeva, who is the president of the country, is not real but a holographic image. Live-action films[edit] Live-action television series[edit] In Animation[edit] Video games[edit] References[edit] Jump up ^ Gonzales, R.

Terraforming of Mars Artist's conception of the process of terraforming Mars. The terraforming of Mars is the hypothetical process by which Martian climate, surface, and known properties would be deliberately changed with the goal of making large areas of the environment more hospitable to human habitation, thus making human colonization much safer and more sustainable. The concept relies on the assumption that the environment of a planet can be altered through artificial means. In addition, the feasibility of creating a planetary biosphere on Mars is undetermined. Motivation and ethics[edit] Future population growth and demand for resources may necessitate human colonization of objects other than Earth, such as Mars, the Moon, and nearby planets. In many respects, Mars is the most Earth-like of all the other planets in the Solar System. Ethical considerations of terraforming include the potential displacement of indigenous life, even if microbial, if such life exists. Challenges and limitations[edit]

The dystopian lake filled by the world’s tech lust From where I'm standing, the city-sized Baogang Steel and Rare Earth complex dominates the horizon, its endless cooling towers and chimneys reaching up into grey, washed-out sky. Between it and me, stretching into the distance, lies an artificial lake filled with a black, barely-liquid, toxic sludge. Best of 2015 Our top stories Dozens of pipes line the shore, churning out a torrent of thick, black, chemical waste from the refineries that surround the lake. The smell of sulphur and the roar of the pipes invades my senses. Welcome to Baotou, the largest industrial city in Inner Mongolia. You may not have heard of Baotou, but the mines and factories here help to keep our modern lives ticking. Element of success Rare earth minerals have played a key role in the transformation and explosive growth of China's world-beating economy over the last few decades. In 1950, before rare earth mining started in earnest, the city had a population of 97,000. Quiet plant

Technomimetics A Molecular Gearing System.[1] Technomimetics are molecular systems that can mimic man-made devices. The term was first introduced in 1997.[1] The current set of technomimetic molecules[2] includes motors,[3] rotors,[4] gears,[5] gyroscopes,[6] tweezers,[7] and other molecular devices. Technomimetics can be considered as the essential components of molecular machines and have the primary use in molecular nanotechnology. References[edit] ^ Jump up to: a b Gakh, A.A.; Sachleben, R.A.; and Bryan, J.C. See also[edit] Teleportation Teleportation, or Teletransportation, is the theoretical transfer of matter or energy from one point to another without traversing the physical space between them. It is a common subject of science fiction literature, film, and television. Etymology[edit] American writer Charles Fort coined the word teleportation in 1931[1][2] to describe the strange disappearances and appearances of anomalies, which he suggested may be connected. "Mostly in this book I shall specialize upon indications that there exists a transportory force that I shall call Teleportation. Fort suggested that teleportation might explain various allegedly paranormal phenomena. The word teletransportation, which expands Fort's abbreviated term, was first employed in Derek Parfit's teletransportation paradox, a thought exercise on identity published in the 1984 book Reasons and Persons. Fiction[edit] The earliest recorded story of a "matter transmitter" was Edward Page Mitchell's "The Man Without a Body" in 1877.[4]