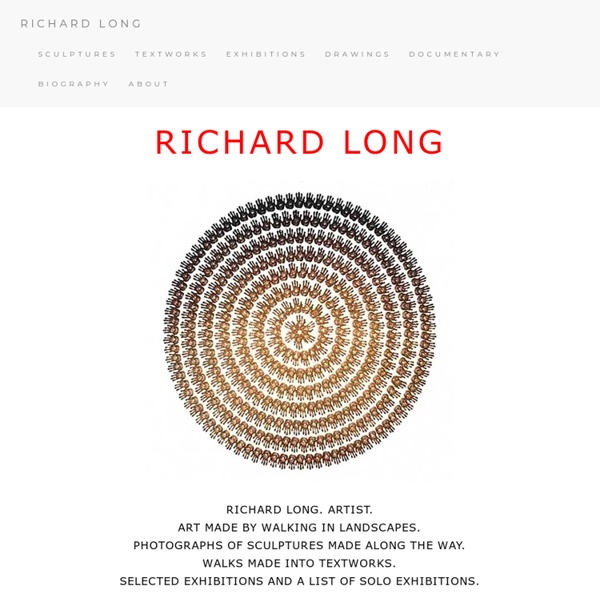 Richard Long. Artist. Art made by walking in landscapes. Photographs of sculptures made along the way. Walks made into textworks. Selected exhibitions and a list of solo exhibitions.

Grégoire Alexandre Grégoire Alexandre is a French photographer, famous for his surrealist works. For many years, Grégoire has studied film. Today he takes pictures especially for fashion, advertising and working with artists and musicians, including the creation of album covers. His world is totally surreal and crazy. Geometric Sculpture of George W. Hart, mathematical sculptor George W. Hart As a sculptor of constructive geometric forms, my work deals with patterns and relationships derived from classical ideals of balance and symmetry.

Big Bambú in Israel Big Bambú: 5,000 Arms To Hold You The Israel Museum Jerusalem June 8th - April 15 2015 The Israel Museum Jerusalem Press Release Doug and Mike Starn Commissioned to Create Monumental Installation for Israel Museum’s Billy Rose Art Garden Jerusalem, Israel (June 8, 2014)—This summer, artists Doug and Mike Starn transform the landscape of the Israel Museum’s Billy Rose Art Garden with a monumental installation of bamboo and rope, towering 16 meters (52.5 feet) high and covering an area of more than 700 square meters (7,500 square feet). Anamorphic illusions Spanning over 30 years, Swiss artist Felice Varini has been mesmerizing viewers with his anamorphic illusions. The artist, who resides in Paris, displays his illusionary work in both private and public spaces. The urban paintings require a specific point of view to visualize the geometric shapes he creates as a continuous whole. From any other standpoint, the piece is fragmented and may not align properly.

Black or White: What Color Works Best for the Background of a Screen? Have you noticed that many business intelligence (BI) software companies have introduced black screens as the standard for mobile devices? Is this because mobile devices work better with black screens? If you look for the research, as I have, it isn’t likely that you’ll find any. SHOAL BY MANDY BARKER The series SHOAL reveals evidence of marine plastic debris collected during the Japanese Tsunami Debris Expedition in June 2012, which sailed across the tsunami debris field in the North Pacific Ocean. The work focuses on plastics collected and photographed from trawls and net samples at various points between Japan and Hawaii, and also from the tsunami affected shoreline in Fukushima Prefecture. Each image includes a different trawl sample, in some cases represented as tiny plankton, and captioned with the grid reference of where each sample was collected. Being able to record plastic at source from such a unique location, despite the devastating circumstances and emotional impact of natural disaster has provided a unique opportunity for scientific research.

Collage art & Illustrations by Sammy Slabbinck “ Play me “ original paper collage © Sammy Slabbinck 2017 “ Autumn , almost ready “ original paper collage “ Quiet “ original paper collage The Bizarre Flexible Paper Sculptures of Li Hongbo What at first look like delicate works of carved porcelain are actually thousands of layers of soft white paper, carved into busts, skulls, and human forms by Beijing artist Li Hongbo. A book editor and designer, the artist became fascinated by traditional Chinese toys and festive decorations known as paper gourds made from glued layers of thin paper which can be stored flat but then opened to reveal a flower or other shape. He applied the same honeycomb-like paper structure to much larger human forms resulting in these highly flexible sculptures. Hongbo recently had a solo show at Dominik Mersch Gallery in Australia who made the videos above, and you can see much more of his work on their website.