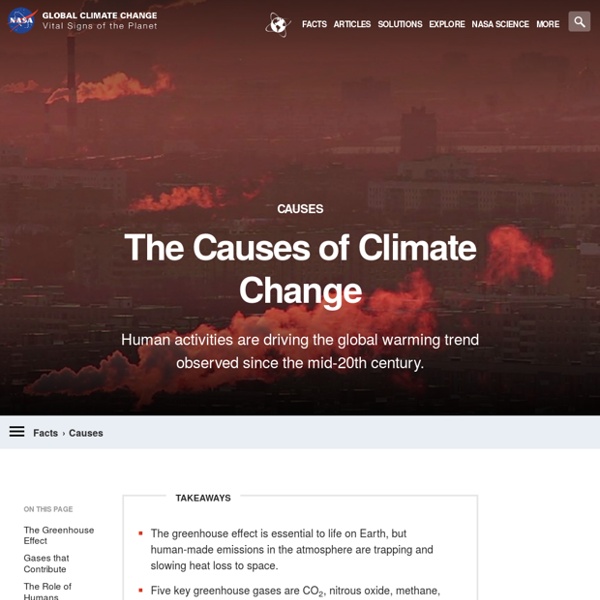 › en español Scientists attribute the global warming trend observed since the mid-20th century to the human expansion of the "greenhouse effect"1 — warming that results when the atmosphere traps heat radiating from Earth toward space. Certain gases in the atmosphere block heat from escaping. Long-lived gases that remain semi-permanently in the atmosphere and do not respond physically or chemically to changes in temperature are described as "forcing" climate change. Gases, such as water vapor, which respond physically or chemically to changes in temperature are seen as "feedbacks." Gases that contribute to the greenhouse effect include: Water vapor. On Earth, human activities are changing the natural greenhouse. The consequences of changing the natural atmospheric greenhouse are difficult to predict, but some effects seem likely: On average, Earth will become warmer. The Role of Human Activity The panel's full Summary for Policymakers report is online at Solar Irradiance

Climate change drove Australian wildfires to extremes attribution science: A field of research, largely used in climate studies. It seeks to test whether — and by how much — climate change may be responsible for certain extreme weather events, such as droughts, extreme flooding, hurricanes, excessive heat or odd storm trajectories. average: (in science) A term for the arithmetic mean, which is the sum of a group of numbers that is then divided by the size of the group. Climate Change & Flooding Sign Up to Receive Flooding Thought Leadership Climate change is increasing the risk of flooding in the US by rising sea levels, increasing extreme precipitation and total precipitation, intensifying storm precipitation, and increasing rates of snow and ice melt. Worsening floods due to climate change are putting a growing number of inland and coastal communities at risk. This year, the spring flood season is overlapping with COVID-19, multiplying the threat to communities at risk of being displaced by flood disasters. How has climate change already worsened US flooding? What is flooding and why is it dangerous?

Accelerated global glacier mass loss in the early twenty-first century 1.Pritchard, H. D. Asia’s shrinking glaciers protect large populations from drought stress. Explainer: Desertification and the role of climate change Desertification has been described as “the greatest environmental challenge of our time” and climate change is making it worse. While the term may bring to mind the windswept sand dunes of the Sahara or the vast salt pans of the Kalahari, it’s an issue that reaches far beyond those living in and around the world’s deserts, threatening the food security and livelihoods of more than two billion people. The combined impact of climate change, land mismanagement and unsustainable freshwater use has seen the world’s water-scarce regions increasingly degraded.

En-ROADS solutions simulator Climate Change Solutions Simulator En-ROADS is a transparent, freely-available policy simulation model that gives everyone the chance to design their own scenarios to limit future global warming. You can try your own experiments and assumptions, and get immediate feedback on the likely impacts. The simulation, developed by Climate Interactive, Ventana Systems, and MIT Sloan, runs on an ordinary laptop in a fraction of a second, is available online, offers an intuitive interface, has been carefully grounded in the best available science, and has been calibrated against a wide range of existing integrated assessment, climate and energy models. A wide range of people have used En-ROADS, including members of the U.S.

Ranking 10 Countries most affected by Climate Change 4. MADAGASCAR (Climate Risk Index: 15.83) Global warming and climate risks threaten the survival of the lemur and other endemic animal species on the island. Adverse weather events have also made the African country one of the most vulnerable to climate change with 72 deaths — 0.27 per 100,000 inhabitants — about 568 million dollars in economic losses and a drop in per capita GDP of 1.32%. Global warming and the greenhouse effect Earth’s atmosphere works something like a giant glass greenhouse. As the sun’s rays enter our atmosphere, most continue right down to the planet’s surface. As they hit the soil and surface waters, those rays release much of their energy as heat.

This source is very reliable as it comes from NASA which is a national, scientific organisation. NASA does lots of research on Earth's climate, along with research in space. It has some of the most respected scientists in the world which makes it highly prestigious. by javadog26 Jan 3

This source is a very reliable one, as it comes from the National Aeronautics and Space Administration (NASA). NASA is the leading space organization in the world, which also contributes to its reliability. It cites every single one of their sources that it uses, and also lists the editors and managers of the website, and also the science editor. by jackodataco Jan 3

As this source is published by NASA that makes it a highly reliable source, in which the authors of the source are qualified researchers, who are recognized as experts in their fields. Since NASA is a high quality, reliable organization it is highly unlikely these sources have not been edited and perfected as they have been seen as a quality source, with no false information in the past. This sources cites references from multiple other reliable organizations and universities for their statistics, which are properly cited, and support their explanations. by noellestefani Dec 19

This is a reliable source. It is published by NASA, a government organization. The scientists at NASA are experts in their field. This is a web page but since it is NASA who published it, it is reliable. This source has most likely been peer-reviewed and edited because it comes from such a reputable source that is seen as an authority. This source has good scientific explanations and makes reference to two other quality sources which are properly cited at the end of the article. by laurenjb14 Dec 19

This is a reliable publication as it is published by NASA, a reliable, reputable source that publishes intensively researched by qualified individuals. The article was published as a web page, which is often less reliable; however, page is part of NASA's website, which is a reliable organization, so it is highly unlikely that the article has not been properly reviewed and edited. There is a scientific explanation provided with properly cited sources from universities and other organizations. Statistics are properly cited and provided to back up scientific claims. by sashathomas Dec 14