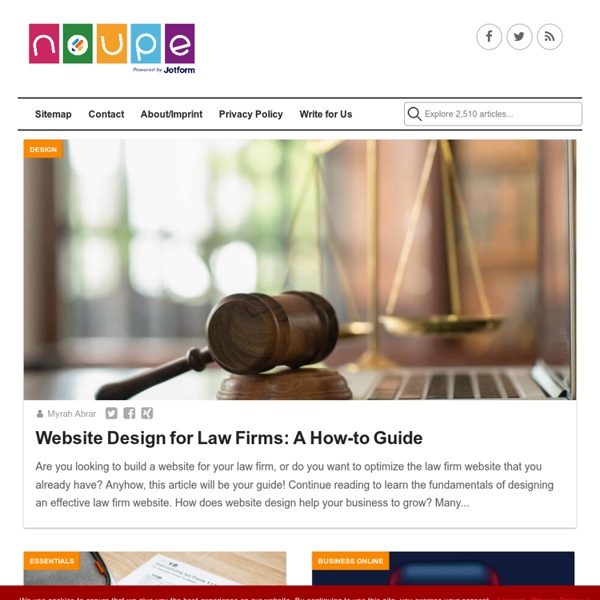 The Evolution Of Icon Design From 1981-2013 December 4, 2013 • By Joe Howard • In Design With the GUI having now been around for over 40 years, today we are taking a look back in time at the evolution of an integral feature – the icon. Since the early 70’s, when bitmapped screens were first developed with GUI’s, the humble icon has come a long way. The following is a collection of icon design in OS’s through history. This is by no means, a complete list of all the icons in every OS between 1983-2013, however I have hand-picked designs that have the most significance and popularity in icon design. 1981 – Xerox Star

Design Awards 2012 - nominees announced The nominees for this year's Designs of the Year Awards at the Design Museum have just been announced. They include Barber Osgerby's Olympic Torch for London and Alexander McQueen creative director Sarah Burton for the Duchess of Cambridge's Wedding Dress. Spanning seven different categories (Architecture, Digital, Fashion, Furniture, Graphics, Product and Transport) the longlist is an eclectic mix which celebrates the very best in global design. Some of our favourites include Assemble CIC's Folly for a Flyover and United Visual Artists', High Arctic interative exhibition held at the National Maritime Museum in London, both of which have already featured on Phaidon.com. Architect John McAslan's restoration of The Iron Market in Port au Prince, Haiti has also been nominated.

Design trends for 2011 Everything inside the design world is permanently changing, evolving and adapting into new ways of expression and communication looking to satisfy the new consuming needs and set innovative exchanging channels. 2010 made a huge closure for the final year of the first XXI century decade, we witnessed the rising of tablets (iPad, Samsung Galaxy Tablet among others), the demise of Internet Explorer 6 and the absurd fanaticism towards Flash (though it’s losing a lot of fans), which is going to be slowly replaced by HTML5 (we’re not saying that Flash is dead, only that HTML5 will begin to cover many of its current uses). Editorial disclaimer Of course that the common design elements such as typography, navigability, color and more have also changed and as you will see on this article, these changes must be apprehended by every designer that wants to set his mark during 2011. No more clutter, it’s time to clean things up More good examples Don’t be shy, start playing with typefaces

Ultimate Designer Toolkit PSD to HTML tutorial using 960 Grid System Sign up to download this tutorial plus 60,000+ more premium design items. This tutorial will teach you how to convert a PSD layout into a CSS / HTML valid website. This tutorial will guide you step by step on how to convert a PSD file into a CSS / XHTML website in less than 60 minutes. […] DEVELOP Tube: Photography to Watch The DEVELOP Tube Photography Video Channel is an educational resource which features interviews, multimedia, lectures & films in photojournalism, documentary & fine art photography. Browse DEVELOP Tube through the main Channel or through its catalogue of over 270 albums featuring videos, bios and links to individual photographers and organizations. SEARCH THE ALBUMS: vimeo.com/developphoto/albums/sort:alphabetical/format:detail Love

4 Web Design Trends You Should Adopt by 2012 134 Flares Twitter 70 Facebook 31 Google+ 12 StumbleUpon 21 Pin It Share 0 5 134 Flares × It’s an all too familiar pattern – trends come; trends go; and the only constant is change. The online world is defined to quick movements. Understanding what the days will bring is therefore deemed impossible. Design is too fickle, it’s believed. Its future can’t be predicted, and 2011 seems to be just another sufferer of fate. All About Website Sidebars: Content, Design, and Examples Design What goes into your sidebar? Some site owners may choose to fill it up with anything - a place for anything and everything, just like a website junk drawer. However, a sidebar can be valuable real estate on any website, and depending on what the website's purpose is, can help further reach the goals of the website. In this post today we'll talk about sidebars in detail, from what goes in them to how they're designed.

Top 13 “Milk Splash” images from the best photographers By Alex Koloskov posted on December 16th, 2011 | This is a list of the best milk splash images from different photographers around the world for your inspiration. December, 2011. Not safe for American workers:-). Be careful when scrolling, there is some beautiful nudity. Discovering the art of animated logos with Adobe After Effects CC Depending on the logo design you're starting with, you'll need to first determine why you want to animate it and what story you want it to tell. Where will this animation be used? Will it be an animated avatar for a company's online presence or website? Are you creating an animated title for a video production?