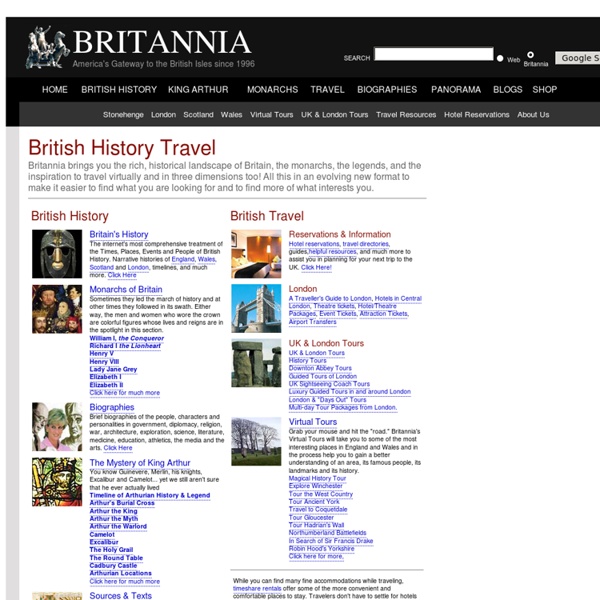 The crayola-fication of the world: How we gave colors names, and it messed with our brains (part I) “Who in the rainbow can draw the line where the violet tint ends and the orange tint begins? Distinctly we see the difference of the colors, but where exactly does the one first blendingly enter into the other? So with sanity and insanity.”—Herman Melville, Billy Budd The History of English (BBC animation) - LinkEngPark Anglo-Saxon The English language begins with the phrase ‘Up Yours Caesar!’ as the Romans leave Britain and a lot of Germanic tribes start flooding in, tribes such as the Angles and the Saxons – who together gave us the term Anglo-Saxon, and the Jutes – who didn’t. The Romans left some very straight roads behind, but not much of their Latin language.

Wonderfully Witty Dog Portraits by Ron Schmidt Though we've seen a lot of dog portraits in our time (see here, here and here) these might just take the cake as the most creative ever. Ron Schmidt is the person behind the company Loose Leashes, an online shop where he sells funny prints of our furry friends in wonderfully witty scenarios. Dog person or not, you can't help but fall in love with these photos. As he told Dogster, “All the images represent the freedom that a dog would have without someone holding its leash.

TouchCast vApps Engage Your Audience TouchCast makes the language of TV come alive. On playback, touch a graphic to browse a related article, image, or content from the web. The video will keep playing while your audience engages with the vApp. The Video is the Web. Explore a variety of vApps, including maps, twitter streams, headlines, photo galleries, and live polls that allow viewers to vote simply by touching the screen. History for Kids: Aztecs, Maya, and Inca Back to History The three most dominant and advanced civilizations that developed in the Americas prior to the arrival of the Europeans were the Aztecs, the Maya, and the Inca. Aztecs The Aztec Empire was located in central Mexico. It ruled much of the region from the 1400s until the Spanish arrived in 1519.

HISTORY OF THE INCAS Cuzco and the Incas: 15th century In the early 15th century the town of Cuzco is a small place, the headquarters of one of many competing tribes within the region which was once ruled from Tiwanaku. But in about 1438 a younger son of the ruler defeats the neighbouring Chanca people, usurps power, gives himself the resounding title Pachacuti ('transformer of the earth') and begins an astonishing process of military expansion.

Prehistoric Inca neurosurgery – Neurophilosophy The procedure known as trepanation, in which a hole is scraped or drilled in the skull, is an ancient form of neurosurgery that has been performed since the late Stone Age. Exactly why ancient peoples performed trepanation has remained a matter of debate: some researchers argue that it was performed for medical reasons, as it is today, while others believe it was done for magical or religious reasons. A new study by two American anthropologists now provides evidence that the Incas performed trepanation to treat head injuries; that the procedure was far more common than was previously thought; and that the Incan practitioners of trepanation were highly skilled surgeons with a detailed knowledge of the anatomy of the skull. Of these 411 skulls, 66 exhibited perforations of varying shape and size. More than half were circular, but some were oval or irregularly circular, and one (above) was rectangular.