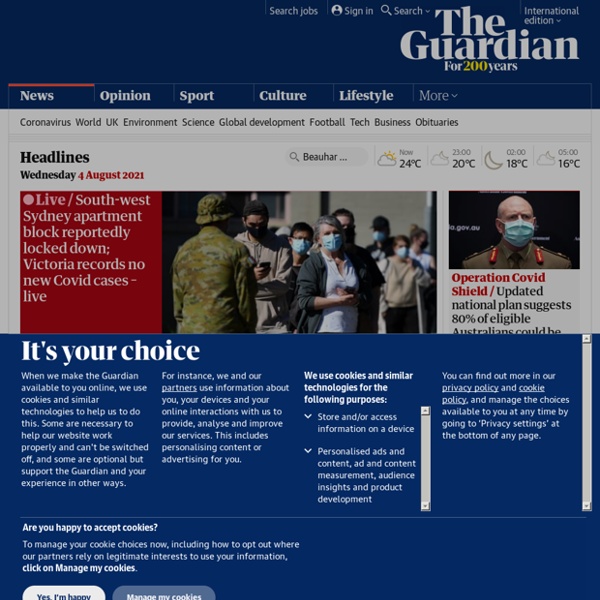 Topix - Australia News 1 hr ago | The Age The making of an unlikely radical Hated by progressives for his role in Gough Whitlam's dismissal and his ultra-conservative foreign policies when Liberal PM, Malcolm Fraser today believes Australia should cut all military ties to the US. Trending on the Topix Network 5 hrs ago | Sydney Morning Herald Nocookies You have cookies turned off To use this website, cookies must be enabled in your browser. To enable cookies, follow the instructions for your browser below. Facebook App: Open links in External Browser Shadow Area where direct light from a light source cannot reach due to obstruction by an object Shadows of visitors to the Eiffel Tower, viewed from the first platform Park fence shadow is distorted by an uneven snow surface Point and non-point light sources[edit]

ABC Australia 'I'm Scottish': Gutted Lambie to quit Senate in latest citizenship shock Jacqui Lambie broke down in a radio interview this morning as she confirmed she will resign from the Senate because she holds British citizenship, telling listeners she always thought she was "Australian as they bloody come". How your MP will vote if Australia says Yes to same-sex marriage We've asked every federal politician what they intend to do if same-sex marriage gets to a vote in Parliament. On the numbers we've gathered, both houses would pass a bill to change the law. Check out what your local member will do.

Animal Kingdom of motile multicellular eukaryotic heterotrophic organisms Most living animal species are in Bilateria, a clade whose members have a bilaterally symmetric body plan. The Bilateria include the protostomes—in which many groups of invertebrates are found, such as nematodes, arthropods, and molluscs—and the deuterostomes, containing both the echinoderms as well as the chordates, the latter containing the vertebrates. Life forms interpreted as early animals were present in the Ediacaran biota of the late Precambrian. NewStatesman - Russell Brand on revolution IIn the summer of 1970, a 34-year-old Welsh artist with a shock of prematurely white hair and a thick, moustache-less goatee was asked by the Times to draw political cartoons during the general election campaign. Idealistic and mistrustful of authority, Ralph Steadman saw little that was likeable or even distinguishable in the Conservative Party’s Edward Heath and Labour’s Harold Wilson. But he had four children to support from a recently ended marriage and needed a steady income, so he accepted the assignment – and got on with causing offence. Steadman’s first cartoon for the newspaper, featuring the diminutive Mr Weath and Mr Hilson, as he named them, along with the Liberal Party leader, Jeremy Thorpe, was titled Happiness Is a Small Politician. Another used the three faces to form the undulations of a landscape, which he called The Wasteland.