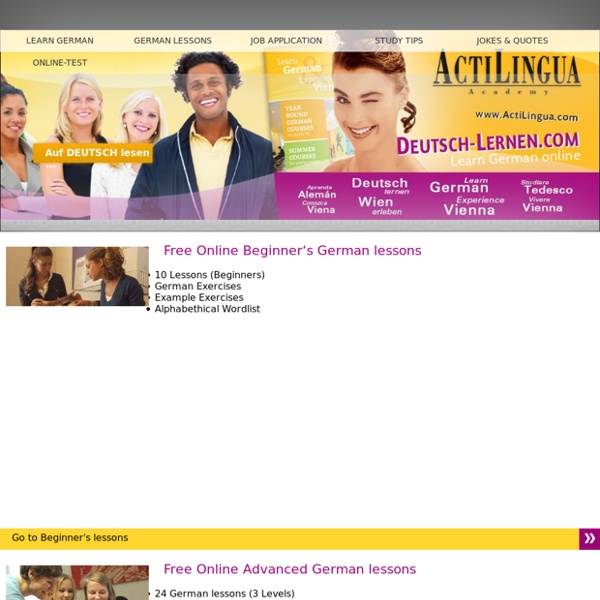 German Short Stories For Beginners - LearnOutLive There are many ways to learn or teach German, but my favorite approach is using stories. I can think of a number of reasons why learning German with stories is so effective, but the best one is this: because it’s fun! Learning a language can easily become a chore, so anything that takes your mind off the struggle while keeping you engaged is heaven-sent. 6 Strategies for Smart Board Almost every teacher who has a smart board or interactive white board (IWB) in the classroom feels that the board has changed his teaching and student learning. Teachers found that this technological tool changes how students gain knowledge of material they are learning. Students are more focused, involved, and participate more when smart boards are being used.

How to Choose from a Variety of Deodorants and Antiperspirants - Vital By Nature Now-a-days, chosing a best deodorants and antiperspirants is a tough job for people. There are a lot of options to choose from like deodrants, antiperspitants, sprays, roll-ons,etc. A simple an extract from lime juice is enough to fight against perspiration in some parts of the world. Some Asian tribes rub their armpits with alum crystals to prevent sweating while some Russians use vinegar. 500 Real English Phrases — Think in English 10 Ways to Say Hello & Goodbye Hello Hi (informal) Hey Hi there (informal) Howdy Bye Bye-bye (informal) See ya later Take care Have a good one 10 Informal Ways to Say Yes and No Yeah Yup Mm-hmm! Uh-huh!

The Forgotten Twentieth-Century - Jan-Werner Mueller Exit from comment view mode. Click to hide this space BERLIN – It has been 20 years since the dissolution of the Soviet Union, which for many historians marked the real end of the “short twentieth century” – a century that, beginning in 1914, was characterized by protracted ideological conflicts among communism, fascism, and liberal democracy, until the latter seemed to have emerged fully victorious.

Top 10 Things That Determine Happiness photo: meddygarnet Happiness is, by nature, a subjective quality with a definition like a moving target. There is scant evidence — qualitative or quantitative — to lend convincing support to those life variables most critical in determining individual happiness, which is likely why past researchers committed to the scientific method rarely tried to tackle the subject. This is changing. 7 Legit Strategies for Newbies Learning to Read German Reading is undoubtedly an important part of learning German. Not to mention, there are tons of benefits to cracking the German code. Being able to read everyday material makes it much easier to get around if you’re visiting Germany. This basic ability will open the doors to new vocabulary and deeper comprehension — as well as, say, let you brush up on German proverbs. It also allows you to follow the subtitles in German movies if you’re not yet able to understand all of the spoken language unaided.

Louis Daguerre and the pioneers of photography Louis Daguerre devised the daguerreotype, the first successful form of permanent photography. The French physicist developed the process for transferring photographs onto silver-coated copper plates. His discovery was made by an accident, according to the writer Robert Leggat, who said Daguerre put an exposed plate in a chemical cupboard in 1835 only to later find it have developed a latent image. The daguerreotype process was unveiled at the French Academy of Sciences in Paris in 1839. It became the first commercially successful was of getting permanent images from a camera. Louis Jacques Daguerre's first surviving daguerreotype image, of a collection of plaster casts on a window ledge, which he produced on a silver plate, in 1837

13 Tips for Dealing With a Really Lousy Day We've all had terrible, horrible, no good, very bad days. A bad work evaluation, a disappointing grade, a potential crush who turns out to be interested in someone else, a fight with your mother, a worrisome report from a doctor, a broken resolution…lousy days take many forms. Here are some strategies I use for coping with a lousy day: Expanding Your Vocabulary Let’s take a look on how big a vocabulary you need to reach fluency in an Indo-European language like German. The first few landmarks are not that difficult to achieve. 100-150 wordsIf you are able to understand somewhere between the 100 and 150 most common words in German, you should be able to understand around 50% of the words in a German text. 250-300 wordsIn order to speak in sentences fairly smoothly you need to know, and actively be able to use, the 300 most frequent words in German. These words are absolutely necessary. 800-1500 wordsA person will during a typical day use somewhere between 800 and 1500 different words.

A Brief History of Vintage Typographic Scripts by Maria Popova From Victorian letters to modernist lettering, or what Venice has to do with children’s penmanship. Iconic design writer Steven Heller has previously delighted us with a peek inside the sketchbooks of famous graphic designers and a fascinating look at the design and branding of dictatorships. Now, he and his partner of 28 years, acclaimed designer Louise Fili, are back with Scripts: Elegant Lettering from Design’s Golden Age — a treasure chest of typographic gems culled from advertising, street signage, type-specimen books, wedding invitations, restaurant menus and personal letters from the 19th to the mid-20th century. Ranging from the classic to the quirky, the 350 stunning images are unified by a common thread: All the typefaces featured are derived from handwriting or symbolic of the handwritten form, and the letters in each touch each other. Images courtesy of Felt & Wire

Download & Streaming : Audio Archive : Internet Archive Listen to free audio books and poetry recordings! This library of audio books and poetry features digital recordings and MP3's from the Naropa Poetics Audio Archive, LibriVox, Project Gutenberg, Maria Lectrix, and Internet Archive users. LibriVox - founded in 2005 - is a community of volunteers from all over the world who record public domain texts: poetry, short stories, whole books, even dramatic works, in many different languages. Learn German Online from Top 15 German Language Blogs - Feedspot Blog Top 15 German Language blogs The best German Language blogs from thousands of top German Language blogs in our index using search and social metrics. Data will be refreshed once a week. If your blog is selected in this list, you have the honour of displaying this Badge (Award) on your blog. These blogs are ranked based on following criteria