Improved Stoves for the Developing World 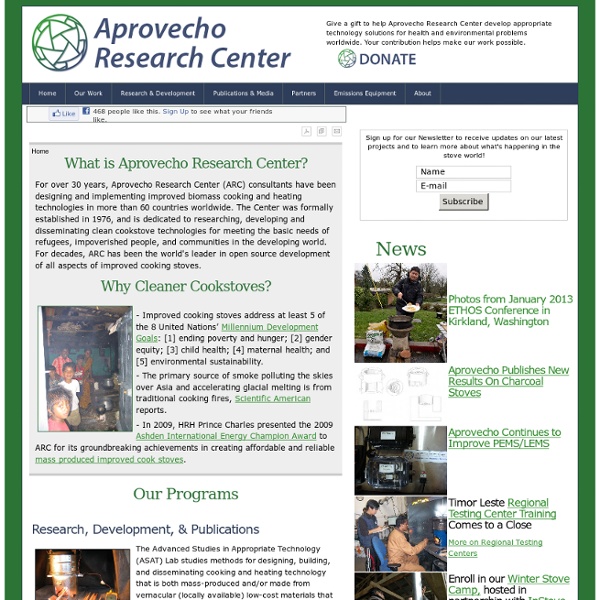 Wood-Burning Cookstove Many people are familiar with wood heaters made from steel barrels. This is a description of how to make a wood cook stove from a barrel. An effort has been made to keep it simple so that you will not need special skills like welding or forging. Our Rocket Stove Editor’s note: we have a new design for a portable rocket stove here. Low-tech is the new high-tech, and the best example of the low-tech revolution is the miraculous rocket stove–a stove that makes it possible to cook with small twigs–no logs needed! Best of all rocket stoves are easy to build. We liked the idea so much that we decided to build a permanent one just off our back deck for entertaining and as a backup to our gas stove should an emergency take out our utilities. The rocket stove was developed for use in poor nations where wood used for cooking has led to the vast, wholesale, deforestation of large swaths of the earth’s surface. Before we built the rocket stove we considered making a cob oven, a mud domed wood fired oven in which you can cook bread and pizza. Staring at the bricks we had scavenged to build the base of cob oven, we realized that we could re-purpose them for a permanent backyard rocket stove that we would actually use. Here’s the materials we used:

pciaonline - Stove Testing At the 2011 PCIA Forum, many stakeholders participated in the development of, or signed on to, the Lima Consensus, an agreement to establish an interim rating system for the evaluation of cookstove models “that reflects the varying tiers of performance in the areas of fuel efficiency, indoor air quality, emissions of particulate matter and carbon monoxide, and safety.” This agreement, an important step along the path toward developing voluntary global cookstove standards, was developed by members of the Global Alliance Standards and Technology Working Group, led by Tami Bond and Morgan DeFoort, and other stove testing leaders to recognize the areas of consensus among the standards and testing stakeholders gathered at the PCIA Forum. In addition, a methodology was identified for rating of indoor air pollution. You can download the full signed consensus as well as the PCIA Forum Presentation below.

Solar Energy, Solar Power, Solar Heating, Photovoltaics, solar e Rocket Stove The Rocket Stove is a variety of wood-burning cooking stove. It is easy to construct, with low-cost materials. These are low-mass stoves designed to burn small pieces of wood very efficiently. Cooking is done on top of a short insulated chimney. A skirt around the pot will help hold heat in, increasing the efficiency. Rocket Stoves use branches, twigs, small wood scraps, or just about any small combustible material. A related design, the Rocket Bread Oven, is constructed using two 55 gallon drums, one inside the other. Rocket Stoves operates roughly twice as efficiently, and substantially more cleanly, than the open fire cooking methods still used in many areas of the world. Because these qualities improve local air quality, and discourage deforestation, the rocket stove has attracted the attention of a number of Appropriate Technology concerns, which have deployed it in numerous third-world locales (notably, the Rwandan refugee camps). Key features Edit Problems Alternatives/Variations

Solar Water Heating Projects and Plans Solar water heating systems have a good economic payoff, and are manageable systems to install or build as a DIY project. Some of the solar water heating designs are very simple and low cost. You can save as much as $7000 by building your own system. There are just over one hundred projects with full construction details listed below -- all free. The projects range from simple batch heaters for warm climates through closed loop and drain back systems that will work in any climate. One of the systems is our own $1,000 solar water heating system that has provided a solar fraction in excess of 90% through our cold Montana winter. My thanks to the people who have built systems, and then taken the time to send in pictures and descriptions for others to use. Directory for this page: Information on pumps, heat exchangers, heat storage tanks Controllers, pipe insulation, backdraft dampers and other components for solar space heating systems here... Solar Water Heater kits or packages... Questions?

Mr. Sun Solar Rocket Lorena Stove The rocket-lorena stove is a 2 pot rest stove and has an efficient conversion chamber which requires very little fuel. It has a firewood chamber and a chimney which further improves efficient burning. It can be made from locally available materials and so is affordable It is a great improvement over the normal three stone stove, that is common in villages, because of the vastly reduced fuel consumption, it simplicity to use and the short time it takes to cook food. The chimney mechanism reduces smoke and associated problems and it is firmly attached to the ground meaning there is less risk of injury occuring from spillages or accidents. Its disadvantages are that it is less portable than the three stone stove and occupies a larger space. [edit] Materials and Requirements It is best to build during the dry season as the stove once build takes several weeks to dry and be ready for use. [edit] Method [edit] Preparing Materials [edit] Construction [edit] Foundations [edit] Building the main stove

Illustrations US Hot Springs | HSE Home Page | Build your own Hot Tub Coordination Sud - STOVEPLUS clean cooking StovePlus is a program launched by GERES in 2012. It aims at supporting and strengthening the clean cooking sector in Asia and Africa. The project intends to meet the needs of the communities through the professional development of the concerned sectors and the sharing of best practices and technical solutions developed by GERES in its various projects. Following the increase in activity level and visibility, it has been decided to appoint a regional coordinator in each area of intervention. This Job description specifically intends to describe the tasks assigned to the Regional Coordinator for Africa. As the responsible for Program activities in Africa, covering delivery of Stove+ packages of services in the region, (s)he oversees the portfolio of projects and manages, together with the Lead Technical Advisor and Regional Technical Advisor, internal and external experts. The Regional Coordinator is part of Stove+ management unit. The StovePlus Regional Coordinator for Africa will:

Build a rocket stove Author’s note, 2015-02-14: Based on the interest I’ve received in this project, I’m considering selling plans for a stove similar to the one described in this article. See the Rocket Stove Plans section at the end of the article and let me know if you’d be interested. Original article: For some time I’ve been considering the best way to deal with a pile of scrap wood that has been growing next to my home, the result of many woodworking and carpentry projects I’ve been involved in over the years. taking it to the landfillcutting it into chips and using it as mulchburning it From a climate change standpoint, the latter of these is surprisingly the least harmful in the long run. Burning also has a side benefit. Ads by Google Warnings Fire is dangerous. 0. 1. 2. 3. 4. How is a rocket stove different from a regular wood stove? The following illustration shows the basic design. Construction Rocket stove mass heaters are often built from steel drums. Mad scientist at work… Does it work? Savings

$350 Solar Heated Hot Tub Search The Renewable Energy site for Do-It-Yourselfers Brian's Description: Here's some info on my project. I framed the collector box with 2"x6" lumber and 1/4" plywood, the size is about 26" x 8'. The pump came from Lowes and is the Garden Treasures MD170 fountain pump. We are real happy with our choice of the 150 gallon Rubbermaid stock tank for our tub. I am using 3 sheets of the 3/4" blue Styrofoam for the tank cover. I did spend about $400 on this project, but did already have some of the materials. Tank $120 Pump 30 Urethane ins 90 (with shipping) sheet insulation 50 CPVC 75 I had most of the wood already, used sections of a old water hose between tank and collector, with pool noodles for insulation. I'm sure I left out some details, so feel free to ask questions. Brian And, the this note on performance from Brian: Was in the hot tub last night at 110 deg, still 106 tonight without running it today. Full Size Pictures: A couple small comments: Some Further Updates -- Feb 2012: