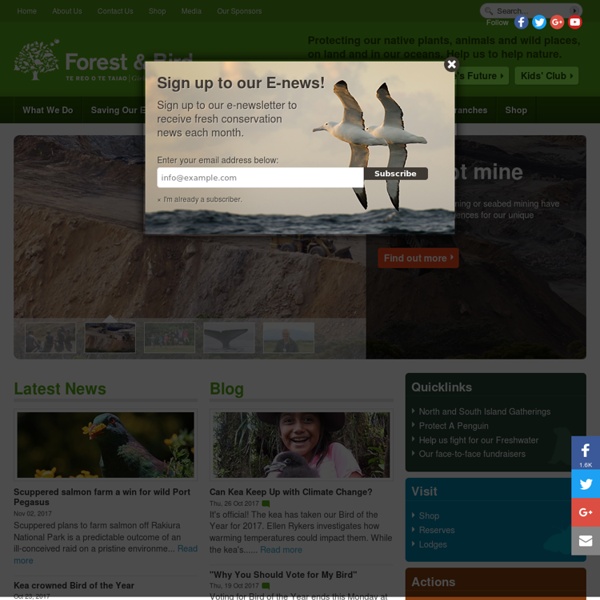 Oriental Bird Club Image Database : Welcome WWF New Zealand - Protecting our native species New Zealand is a true ‘hot spot’ for albatrosses,. Nearly half of the world’s 22 albatross species breed here, and many of these breed nowhere else. Yet tens of thousands of seabirds including albatross are killed each year by fishing operations. Of the species that breed only in New Zealand, the Chatham albatross is listed by the World Conservation Union (IUCN) as 'critically endangered' and the northern royal albatross is 'endangered'. The remaining species are listed as 'vulnerable'. To stop seabird numbers declining further, WWF is part of Southern Seabird Solutions, which unites fishers, industry, government and WWF in the common cause of saving seabirds. Southern Seabird Soultions exists to help fishers fish smarter, ensuring seabird-friendly fishing is practised throughout New Zealand fleets and internationally, so more seabirds return to New Zealand shores safely.

Kiwi The Kiwi is endemic, meaning it is only found in New Zealand. New Zealanders have adopted it as their national symbol. A looong beak Kiwi have long beaks with nostrils at the tip for sniffing out their favourite foods like worms, spiders and other insects. Teeny, tiny wings Kiwi have wings but they are very very small which means kiwi are flightless. Camouflage feathers Kiwi feathers are rough, shaggy and brown and have special patterns and colours to camouflage them on the ground. What's that smell? Kiwi have a very distinctive smell - some say that they smell like a forest mushroom. Kiwi kick boxers Kiwi defend themselves using their powerful legs and sharp claws to kick and scratch at anything attacking them. Supersized eggs Female kiwis lay enormous eggs that can take up 20 percent of their body and weigh around 430g. Night Walkers Maori call kiwi ‘ te manu huna a Tāne’ or the hidden bird of Tāne because they are nocturnal. Species of Kiwi There are 5 different species of kiwi Kiwi and Māori

Australian Marine Conservation Society European Bird Census Council, EBCC Home Page Dunedin, Otago & Taieri Gorge Train Journeys | Dunedin Railways, NZ Australian Marine Conservation Society - Australia's Sustainable Seafood Guide Your independent tool to choosing your seafood wisely. Welcome to Australia's Sustainable Seafood Guide Online - the first online sustainability guide for seafood consumers in Australia. It was developed in response to growing public concern about overfishing and its impact on our oceans and their wildlife. It is designed to help you make informed seafood choices and play a part in swelling the tide for sustainable seafood in Australia. The fish we choose today will directly affect the health of our oceans tomorrow. Overfishing, destructive fishing gear and poor aquaculture practices impact significantly on our seas, marine wildlife and habitats. As consumers we can and do make a difference through the choices we make.

Birds Korea - conserving birds and habitats in South Korea and the Yellow Sea eco-region What Has Really Changed? Birds Korea, February 2nd 2014 In the ten years since Birds Korea was founded, the Republic of Korea (ROK) has hosted several high-profile international meetings relevant to bird and habitat conservation, including the Conference of the Parties (COP) of the “Wise Use of Wetlands” Ramsar Convention in 2008 and the World Congress Conservation in 2012. Later this year too, the nation will host the 2014 Convention on Biological Diversity COP. On the surface, there has been tremendous progress in bird and biodiversity conservation in the past decade. Bird Declines While public attitudes in the ROK towards conservation have improved greatly, many bird species are still in decline. Our research indicates that the declines in some species have been long-term and gradual, likely caused by a combination of habitat degradation and loss, pollution, climate change, and increased pressures both inside and outside of the ROK. Sustainable Development Ramsar Sites Poultry Flu

New Zealand 100% Pure | Official Travel information from Tourism New Zealand International Sign inSign up 0 Wishlist Search Abel Tasman Coast Track, Nelson By Alistair Guthrie Kia Ora Welcome to the official travel website for New Zealand Your Middle-earth journey begins here Get inspired See all things to do | All destinations | Recommended trips Find & book flights A land andpeople richwith stories Explore stories about our land, people and culture › Share this page Search for an activity Essential New Zealand Download our travel app to save and sync your Wishlist collection Sign in | Sign up Find us on EssentialNew Zealand Contact Us Help Our other sites Ratings provided by Check out what other travelers say about New Zealand on TripAdvisor.