After Wet Spell, 2nd Sinkhole Opens up in Oregon 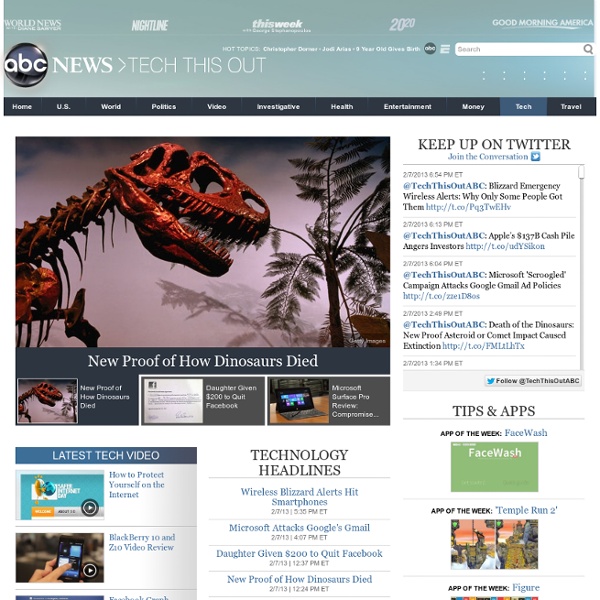 Just When You Thought It Was Safe: Skype Vulnerabilities Emerge Silly hackers are always trying to ruin the Internet and they have found yet another target in the form of popular VOIP software Skype. According to the sweetest text security report ever, linked from h-online’s recap: “Skype suffers from a persistent Cross-Site Scripting vulnerability due to a lack of input validation and output sanitization of the ‘mobile phone’ profile entry. Other input fields may also be affected.” I love that—output sanitization. What is the moral of the story? [via The H Security] Science News and Current Events

iCreate - Apple, Mac, iPhone in-depth Reviews, News and Tips iPad Pro: Analyst questions imminent arrival of 12–inch tablet Apple’s super–sized iPad Pro is unlikely to launch in the next few months, amid reports that shipments of the slate's 12–inch displays are not at high enough volumes to point to an imminent release. That’s the word from IHS analyst Rhoda Alexander. She queried whether Apple was even set on a specific screen size for the device, throwing into doubt previous reports that Tim Cook and co were working on a 12.9–inch model. Interestingly, she said that ‘various sizes’ of screen were being discussed, pointing to Apple not being nearly close enough to scale up production for a spring launch. Following the launch of Samsung’s 12–inch Galaxy Note Pro at CES, it was widely thought that Apple would not be long in following the lead of its biggest rival. However, Alexander’s caution shows that we could be looking at an autumn launch of the iPad Pro at the very earliest. Source:

Massive sinkhole stops transit tunnelling in downtown Ottawa Jon Willing, QMI Agency , Last Updated: 3:07 PM ET OTTAWA — LRT officials on Friday couldn’t explain why the road above a downtown tunnel excavation caved in, forcing workers to pull their equipment to safety. Tunnelling at the city’s east portal is on hold until the Rideau Transit Group, the city’s LRT contractor, determines the cause of the road collapse on Waller St., south of Laurier Ave. “We can only confirm it was located directly above when tunnel excavation was occurring and at this point we cannot confirm its root cause,” deputy city manager Nancy Schepers said during a press conference. Geotechnical experts haven’t identified other safety concerns, Schepers said. “I can assure you that all steps are being taken to, first, protect the public and all physical assets in the immediate area. Around 10 p.m. According to RTG construction director Tim Stewart, the collapse happened above the crown of the tunnel, which is about five metres down from road level.

Facebook exposing children to online threats: EU survey (BRUSSELS) - Social networking sites such as Facebook are not doing enough to protect children from potential dangers such as grooming by paedophiles or online bullying, European authorities said Tuesday. Of 14 websites tested on behalf of the European Commission, just two -- Bebo and MySpace -- ensure the required controls to make sure "potential strangers" cannot gain access to profiles. "I am disappointed that most social networking sites are failing to ensure that minors' profiles are accessible only to their approved contacts by default," said European Commission vice president Neelie Kroes in a statement. The authorities in Brussels say the number of minors who use the Internet and subscribe to social networking sites is growing -- currently 77 percent of children aged 13-16 and 38 percent of those aged 9-12. Kroes said she will urge online social networking site owners to make the changes in a "self-regulatory framework" under discussion. Text and Picture Copyright 2011 AFP.

DailyTechNews.com - Top Technology Stories Mac and Apple News, Tips, Help and Reviews iPhone 6: Large-screen phablet coming May 2014, claim sources Apple is readying a larger-screen iPhone 6 for release in May 2014. That’s according to ‘sources from the upstream supply chain’, speaking with the notorious rumour hounds at Digitimes. While details of the device remain sketchy, the insiders say it’ll use a 20nm processor made by Taiwan Semiconductor. Previous chatter has suggested Apple is looking at using a 5-inch display with the iPhone 6, breaking with its traditional stance of using smaller screens. The sources also back up other chat about a so-called iPad Pro. A May iPhone release would be highly unlikely, with Apple’s launch cycle tied to an October timeframe. Source Digitimes