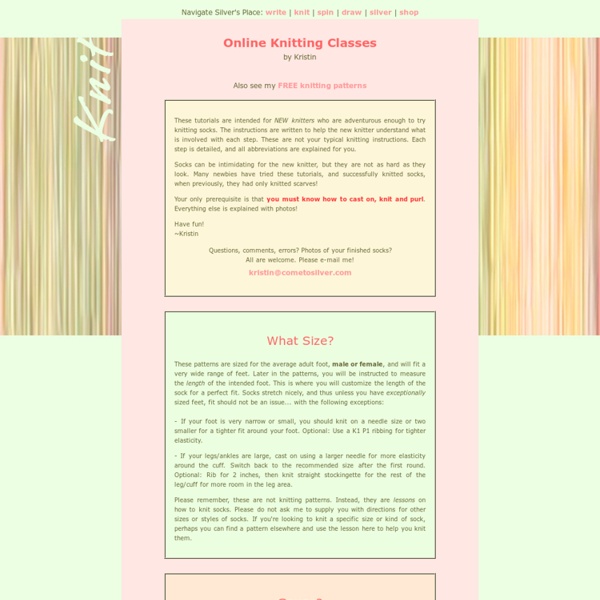 These patterns are sized for the average adult foot, male or female, and will fit a very wide range of feet. Later in the patterns, you will be instructed to measure the length of the intended foot. This is where you will customize the length of the sock for a perfect fit. Socks stretch nicely, and thus unless you have exceptionally sized feet, fit should not be an issue... with the following exceptions: - If your foot is very narrow or small, you should knit on a needle size or two smaller for a tighter fit around your foot. Optional: Use a K1 P1 ribbing for tighter elasticity. - If your legs/ankles are large, cast on using a larger needle for more elasticity around the cuff. Please remember, these are not knitting patterns. Related:  Knitting

Knitting Increases An increase is simply adding a stitch to the knitting. Consider all of the ways you could create a new loop of yarn on the needle. Each way is likely to have been named and used by someone. The sampler below contains both increases and decreases. Make One Away This doesn't match the right side absolutely perfectly, but it is just fine for beginners. view continental videoview english video This is the easiest increase. Make One Left view continental videoview english video This creates the exact same stitch as Make One Away, it just does it tighter and more invisibly. Knit Right Loop view continental videoview english video This increase, paired with KLL, is ideal if you ever need to do two symmetrical increases in adjacent stitches. I don’t, however, like this increase in most applications: When used on alternate rows over several rows, as is often called for with increases, the knitting pulls in a bit along the increase line. In my sample I knit KLL followed by KRL.

magazine - Short rows for bust shaping (technique feature) Short Rows for Bust Shaping Short rows have lots of uses. They make a flat object take shape. They can be the heel of a sock, or they can turn the stair stepping of a shoulder into a smooth angle. They can build up the back neck in a raglan sweater, or they can shape a sweater front for a large bosom. Today’s article is focusing on short rows for bust shaping. First, let’s talk about what short rows do Short rows add length to the overall body. As many of you know, I’m a very busty girl. One of the things I look forward to most about wearing a sweater I hand knit is that I won’t have to do any of that. If you’ve done some reading about short rows for the bust you’ve probably found several approaches to them.

The Right Way To Wash Sweaters (Because You're Doing It Wrong) Spending too much time and money on taking your sweaters to the dry cleaners? Save money with these simple tips that help you to wash your sweaters correctly at home. This can work for everything from wool, cotton, and cashmere. Using a mild detergent and tepid water to do the gentle washing then dry by rolling the sweater into a towel and then letting it air dry after you’ve flattened it out to its original shape. Joining - Techniques with Theresa The best join is a join that is as invisible as possible. The best way to accomplish a nearly invisible join varies with the yarn’s fiber content, thickness, the type of project and other factors. If you're knitting something that will be sewn together later, it's best to join a new yarn at the edge so that the yarn ends can be hidden in the seam. Just finish the row, attach the new yarn with a loose knot and start the next row with the new skein of yarn. But what if you run out of yarn unexpectedly in the middle of a lace shawl with 300 stitches on the needle? The spit splice The animal fibers that stick together well - think fibers that shrink and stick together when subjected to moisture, heat and friction, like in your washing machine on the hot cycle - are the easiest to join invisibly. The oh-so-attractively-named "spit splice" is simply applying heat, friction and moisture to felt the two ends of yarn together. First open up the fibers on each yarn end for about an inch or two...

Caffeine, kids, and knitting...in that order.: Gnome Home Several people on Ravelry have asked me to concoct a pattern for the Gnome Home I made for our niece Jess for Christmas. I totally improvised it at the time, so I don't remember exactly how I did it, but I have devised a set of sketchy instructions so you can make one of your own. Be advised that by sketchy I mean sketchy. For the base, use a bulky green yarn held together with a strand of matching green eyelash yarn (grass) or several strands of eyelash yarn held together. Base:ch 2. Walls:round 1: sc around. Roof:Switch to roof color.round 1: sc aroundround 2: [5 sc, sc 2 tog] repeat aroundround 3: sc aroundrepeat rows 2 and 3 until you have about 5 or 6 sts left. Soffit:Your number of stitches should be divisible by 6, so you will be working each scallop over 6 sts. I crocheted the flowers in a sport weight microfiber acrylic, but you can use any sport or fingering weight yarn.

Denise&#039;s Toe=Up Socks lesson six Cybersocks Toe-up Socks Instructor Denise Powell Lesson Six - Two Stretchy Cast Offs The first method is easy and can be used on any edge. The second takes more practice and works with single rib only but gives a very elegant finish. Elizabeth Zimmermann's Sewn Cast off This is from Knitting Without Tears; it has been a favourite of mine for many years (hmm, that's an ambiguous sentence - I meant the cast off, but it applies equally to the book. . . .) Break yarn, leaving a tail about 4 times as long as the circumference of the sock. * sew forward (right to left) through two stitches as if to purl, leave the stitches on. Denise's variation for circular knitting: For the very first stitch only, after you go backwards through it, do not remove it, instead move it to be the last stitch on the final needle. Grafted cast off for single rib This cast off is the equivalent of grafting or duplicate stitch across the top of the single rib stitches. Click on any of the photos for a larger image.

A very nearly invisible increase Here is an increase which is as invisible as any increase can well be--the sort of increase you would do in the middle of a field of stockinette, should you ever need to do such a thing. Step 1 (above): The green stitch is the next stitch on the left needle, the red stitch is the stitch under that. The blue yarn is the yarn of the current row--called the running yarn. Step 2 (above): Insert the head of the right needle into the red stitch as shown. Step 3 (above): Place the head of the red stitch on the left needle--arrange it untwisted, with the right arm forward. Step 4 (above): With the running yarn (blue) knit the red stitch AND the green stitch. That's it. --TECHknitter PS: There has been some confusion between the nearly invisible increase which ADDS a stitch to your fabric (this post above) and "knitting into the stitch below" which is a knitting trick to make a thick and puffy fabric but which does NOT ADD a stitch.

knitty.com It started with The Lord of the Rings -- specifically, all of the tree motifs on Gondorian armor and clothing. I wanted a sweater with a tree on it. Unfortunately, the obvious way to get an image on a sweater is through colorwork. Having just completed my first cabled sweater, I thought I could design something like that. This article will teach you how to design your own charts for cabled trees. Our friends the colorworkers have it easy. Unfortunately, cable knitters cannot do it this way. By measuring a few cabled swatches, I discovered that cables add very little to the width of a piece. But all the increases and decreases make it difficult to write out a conventional chart for a tree. Then I realized that there was no reason why a two-stitch-wide cable should take up two stitches of a chart. Here's the method I eventually worked out. I strongly advise that you do the same. First, go and get some graph paper, preferrably knitter's graph paper which matches your gauge.