MOOC – A solution to Higher Education and Future Learning 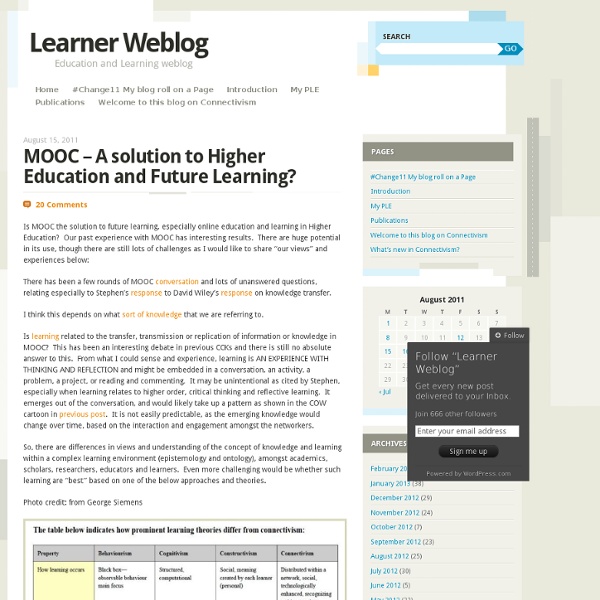 Is MOOC the solution to future learning, especially online education and learning in Higher Education? Our past experience with MOOC has interesting results. There are huge potential in its use, though there are still lots of challenges as I would like to share “our views” and experiences below: There has been a few rounds of MOOC conversation and lots of unanswered questions, relating especially to Stephen’s response to David Wiley’s response on knowledge transfer. I think this depends on what sort of knowledge that we are referring to. Is learning related to the transfer, transmission or replication of information or knowledge in MOOC? So, there are differences in views and understanding of the concept of knowledge and learning within a complex learning environment (epistemology and ontology), amongst academics, scholars, researchers, educators and learners. Photo credit: from George Siemens Would a structured course like that offered in Stanford University on AI also be called a MOOC?

Here a MOOC, there a MOOC « Lisa’s A couple of things came together recently, which is almost always my foundation for a blog post. First, Stanford University is about to offer an open, online course on Artificial Intelligence. Then, George Siemens posted about it in Google + (hey, cool, a G+ post has a permalink!) At roughly the same time, discussion in the EduMOOC Google Group had two interesting threads, one about the work a few of us are doing trying to expand the Wikipedia page on MOOCs (see my last post), and one about what a MOOC is. Then yesterday, I was part of a fun MOOCast Hangout with master bringer-together-of-people Jeff Lebow and some cool people from the EduMOOC. My definition of a MOOC sticks to the basics: That’s it. connectivist pedagogyno cost to participantsa structure set up to deliberately encourage connections among studentsan intention to encourage lifelong learning I see these as good ideas, just not required for a MOOC. Jeff Lebow asked during the Hangout why it matters how we define MOOC?

Massive Open Online Courses, aka MOOCs, Transform Higher Education and Science When campus president Wallace Loh walked into Juan Uriagereka's office last August, he got right to the point. “We need courses for this thing — yesterday!” Uriagereka, associate provost for faculty affairs at the University of Maryland in College Park, knew exactly what his boss meant. Campus administrators around the world had been buzzing for months about massive open online courses, or MOOCs: Internet-based teaching programs designed to handle thousands of students simultaneously, in part using the tactics of social-networking websites. To supplement video lectures, much of the learning comes from online comments, questions and discussions. MOOCs had exploded into the academic consciousness in summer 2011, when a free artificial-intelligence course offered by Stanford University in California attracted 160,000 students from around the world — 23,000 of whom finished it. Image: Courtesy of Nature magazine The ferment is attributable in part to MOOCs hitting at exactly the right time.

Community-College Students Perform Worse Online Than Face to Face - Community Colleges By Ryan Brown Community-college students enrolled in online courses fail and drop out more often than those whose coursework is classroom-based, according to a new study released by the Community College Research Center at the Teachers College at Columbia University. The study, which followed the enrollment history of 51,000 community-college students in Washington State between 2004 and 2009, found an eight-percentage-point gap in completion rates between traditional and online courses. Although students who enrolled in online courses tended to have stronger academic preparation and come from higher income brackets than the community-college population on the whole, researchers found that students who took online classes early in their college careers were more likely to drop out than those who took only face-to-face courses. Among students who took any courses online, those with the most Web-based credits were the least likely to graduate or transfer to a four-year institution. Ms.

ABC – The 21st Century Learning Model For those that know me, I started out my career many moons ago as a K-12 educator. For some of you, I’m sure you’re thinking, “what a lunatic”. I only lasted three years but I look back on those years, nevertheless, with the fondest of memories. Truth be told though, I didn’t last because I was in the minority. As a 25 year-old trying to uproot the education system to become more collaborative, more open, more connected, I was leery of falling into the ambivalence pit of staffroom rhetoric. But, alas, I was young, naïve and perhaps a little pig-headed. Fast forward many moons later, through career stops in higher education and the corporate world of learning and collaboration, I’m finally coming back to those K-12 days. I’m back because the so-called 21st Century Learning movement is no longer trying to merely flank the system; it’s a full-frontal assault. And that’s bringing an ear-to-ear smile to this follicly challenged head. Access (A) Access should include: Behaviour (B) Community (C) PS.

Is it or is it not a MOOC? (#eduMOOC) The latest massively open course, offered by Stanford University on Artificial Intelligence is raising the question again. What exactly does a course need to be in order to be classified as a MOOC? There has been some discussion on this Google Plus thread started by George Siemens. Osvaldo challenges that the course itself is too structured to be MOOC. So, I wonder, how do we define a MOOC? I think there are two ways we can do this, either literally as a "Massively Open Online Course" and look at each word in the definition to provide critical for inclusion, or we can go back to the roots of a MOOC and add that a MOOC must also be the realization of connectivism pedagogy – which adds additional criteria – specially those that define connectivism. Let's start with the words that make up MOOC: M – Massive – How do we define massive? O – Open – How do we define openness. O – Online – I'm not sure there is much debate on this one. C – Course – Now this is a big one.

Welcome to CCK11 ~ CCK11 Evolving Education Technology: From Chalkboards to MOOCs Cours / Études en formation à distance, et formation en formation à distance à la Téluq Accueil | FAQ | Bottin | Carrières | Nous joindre | Dossier étudiant Plan du site Formation à distance 1er cycle TED 3001Enseigner avec les technologies de l'information 2e et 3e cycles Retour en haut Moving Toward 2020: The Learning Decade Four hundred years ago, British philosopher Francis Bacon declared that "Knowledge is Power." And, until recently, many corporate leaders would have wholeheartedly agreed with him. But, today, as we struggle to cope with an uncertain economy, complex globalization, and unprecedented technological transformation, executives on just about every continent increasingly believe that "Knowledge is Survival." Companies around the world responded to the Great Recession by cutting and controlling costs to reap new efficiencies. Indeed, learning has gained new prominence as a critical lever for performance. To be sure, not every company is a learning company; but more and more organizations recognize that learning can help solve the most vexing economic and financial problems of the day. There are many reasons why corporations have decided to make significant investments in learning, even in these budget-constrained times, but here are what we believe to be the main drivers:

Pedagogy First! Here I go thinking that I can quickly finish this task as I’m on catch up mode big time. I should have known better!! Having watched the video and read the articles, I am left thinking about Issac Asimov’s Foundation series. First the video I usually turn up my nose at theory as I see myself as a more application person, but the content of this video totally hooked me. As time went on and as my study needs changed, I moved to extramural study (management and maths) in the late 1980s to the early 2000s. Coming back to face to face teaching (IT) in the mid 200s was an interesting time because the Internet was here and making a big impact. Now of course, we are hit by the Web 2.0 tools and I have been introduced to the connectivism mode which this course is all about – designing my own learning environment, finding out what works for me and trying new things. If I look at my teaching style, I am definitely of the constructivism mode. An example of this from my current teaching.

Heli connecting ideas » Blog Archive » Research about MOOC pedagogy Rita Kop, Helene Fournier and Sui Fai John Mak have published an article “A Pedagogy of Abundance or a Pedagogy to Support Human Beings? Participants Support on Massive Open Online Courses.” The article continues the research tradition (a short one!) which began after CCK08. This newest article gathers carefully information about living in open online courses (PLENK2010 and CCK11). I am interested in why people come to participate in open online courses, what is their motivation? I should like to develop qualitative methods for virtual ethnography – methods that help to understand deeper. The Visitors and residents project is one way forward, how could I combine it with open online course behavior?