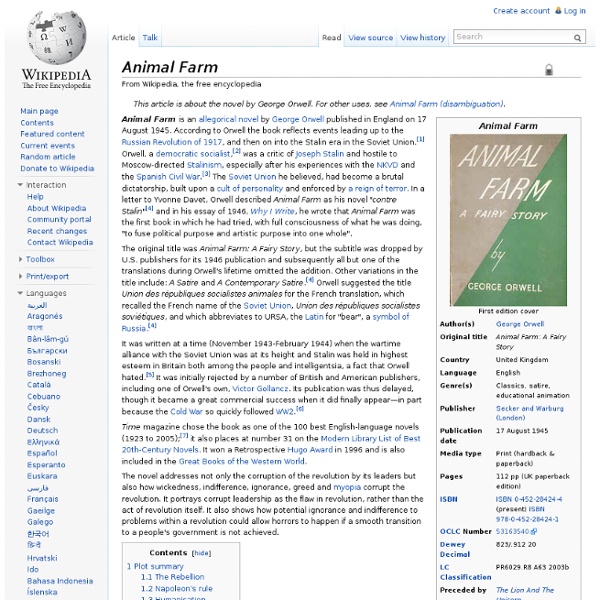 Animal Farm is an allegorical and dystopian novel by George Orwell, published in England on 17 August 1945. According to Orwell, the book reflects events leading up to the Russian Revolution of 1917 and then on into the Stalin era in the Soviet Union.[1] Orwell, a democratic socialist,[2] was an outspoken critic of Joseph Stalin and, especially after experiences with the NKVD and the Spanish Civil War, he was actively opposed to the controversial ideology of Stalinism.[3] The Soviet Union, he believed, had become a brutal dictatorship, built upon a cult of personality and enforced by a reign of terror. In a letter to Yvonne Davet, Orwell described Animal Farm as a satirical tale against Stalin "un conte satirique contre Staline", and in his essay "Why I Write" (1946), he wrote that Animal Farm was the first book in which he had tried, with full consciousness of what he was doing, "to fuse political purpose and artistic purpose into one whole". Plot summary Characters Pigs Humans Origin

A People's History of the United States A People's History of the United States is a 1980 non-fiction book by American historian and political scientist Howard Zinn. In the book, Zinn seeks to present American history through the eyes of the common people rather than political and economic elites. A People's History has been assigned as reading in many high schools and colleges across the United States.[1] It has also resulted in a change in the focus of historical work, which now includes stories that previously were ignored.[2] The book was a runner-up in 1980 for the National Book Award. It has been frequently revised, with the most recent edition covering events through 2005. In 2003, Zinn was awarded the Prix des Amis du Monde Diplomatique for the French version of this book, Une histoire populaire des États-Unis.[3] More than two million copies have been sold. Reviews have been mixed. In a 1998 interview, Zinn said he had set "quiet revolution" as his goal for writing A People's History. Overview[edit]

30 Books I’m Glad I Read Before 30 In various ways, these 30 books convey some of the philosophy of how Angel and I live our lives. I honestly credit a fraction of who I am today to each title. Thus, they have indirectly influenced much of what I write about on this site. A medley of both fiction and nonfiction, these great reads challenged my internal status quo, opening my mind to new ideas and opportunities, and together they gave me a basic framework for living, loving, learning and working successfully. If you haven’t read these books yet, I highly recommend doing so. Stumbling on Happiness by Daniel Gilbert – Gilbert, a Harvard professor of psychology has studied happiness for decades, and he shares scientific findings that just might change the way you look at the world. What are your favorite books? Photo by: Katie Harris