In the age of robots, our schools are teaching children to be redundant 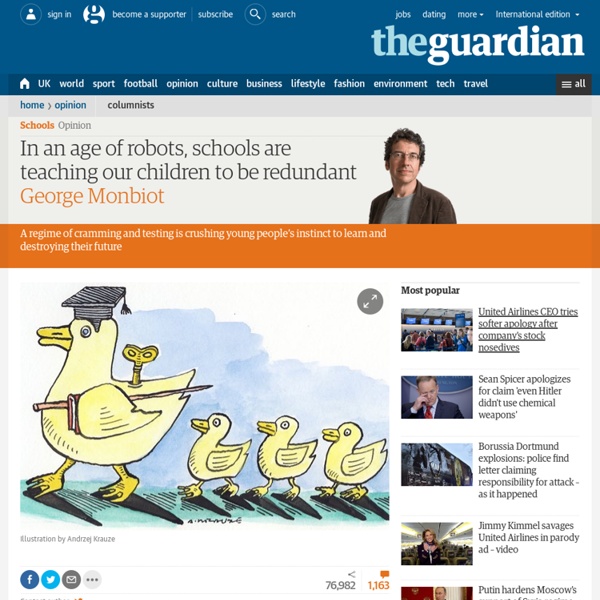 In the future, if you want a job, you must be as unlike a machine as possible: creative, critical and socially skilled. So why are children being taught to behave like machines? Children learn best when teaching aligns with their natural exuberance, energy and curiosity. So why are they dragooned into rows and made to sit still while they are stuffed with facts? We succeed in adulthood through collaboration. So why is collaboration in tests and exams called cheating? Governments claim to want to reduce the number of children being excluded from school. The best teachers use their character, creativity and inspiration to trigger children’s instinct to learn. There is, as Graham Brown-Martin explains in his book Learning {Re}imagined, a common reason for these perversities. As far as relevance and utility are concerned, we might as well train children to operate a spinning jenny. When they are allowed to apply their natural creativity and curiosity, children love learning.

Why Other People Wreck Brainstorms (And How To Stop Them) If you’re a first-time investor with, say, $15,000 in savings, you have plenty of options these days. Newfangled robo-advisers like Betterment and Wealthfront will happily take your money, as will incumbents like Charles Schwab, which have launched improved digital products. But if you’re starting at zero, with practically nothing in the way of savings, you would have found few options designed to serve your needs—until now. There are suddenly half a dozen startups eager for your first saved dollar.

Information Avoidance: How People Select Their Own Reality Monday, March 13, 2017 By Shilo Rea We live in an unprecedented "age of information," but we use very little of it. Dieters prefer not to look at the calories in their tasty dessert, people at high risk for disease avoid screenings and people choose the news source that aligns with their political ideology.

Aboriginal Art Culture and Tourism Australia THE HUMAN WORLD We are the Indigenous people of Australia. Aboriginal people are those traditional cultures and lands lie on the mainland and most of the islands, including Tasmania, Fraser Island, Palm Island, Mornington Island, Groote Eylandt, Bathrust and Melville Islands. The term "Aboriginal" has become one of the most disputed in the Australian language. Scaling Awesome Schools — a discussion with Ted Fujimoto In what has to be one of the more surreal experiences of this trip so far, I spent the morning last Friday with Ted Fujimoto (in a super cool restaurant just off Sunset Boulevard in West Hollywood, hence the surreal-ness!) talking all things from systems thinking in the tech and comms sector, franchising processes in the car industry, brand development and transformation in the hotel and restaurant industry, innovation in digital music design and cloud based apps….and all boiling down into protocols and processes for school design, culture development and mindset embedding, and the effective scaling of new models of school! It was really fascinating to hear how his broad range of life and career experiences and personal interests have informed his thinking over time around this.

theconversation It is generally thought that science helps good ideas triumph over bad. The weight of evidence eventually pushes false claims aside. But some ideas march onward despite the evidence against them. STEAM Stick Bombs: Explosive Kinetic Engineering and Chain Reactions What are stick bombs? They are arrangements of large craft sticks, (tongue depressors/popsicle sticks) that rely on tension to stay together. When one stick is removed, the whole group fly into the air in an engineering explosion of fun and excitement. Does social status affect generosity? High-ranking people don't always turn out to be selfish jerks. It all depends on whether they feel worthy of their prominent social position, new research indicates. A series of six scientific studies led by Michigan State University scholar Nicholas Hays found that people with high social status who didn't believe they earned that status were much more generous than high-status people who felt they deserved the respect and admiration of others. Prominent people who don't feel their status is fair and equitable become more generous with others to alleviate that sense of inequity, he explained. "The effects of social status on generosity are contingent on deservingness, meaning that high-ranking people don't always behave selfishly, as a significant amount of research suggests, but do indeed care about whether or not they deserve their position," said Hays, assistant professor of management.

sans titre The RSP1A is our new improved entry-level receiver—it is a powerful wideband full featured 14 bit SDR and perfect as an all round general coverage communications receiver plus much much more. RSP1A Pricing – $109 (£86 excluding tax) plus shipping – INCLUDES SDRuno! The RSP1A covers the complete radio spectrum from 1kHz (VLF) to 2GHz (Microwaves) with up to a massive 10MHz visible bandwidth and the companion SDRuno software has all the popular ham bands and shortwave broadcast bands as “presets” for instant set-up. SDRplay provides direct technical support whether you buy direct from us here on our website or via our channel channel partners (Ham Radio Outlet, Martin Lynch, SDR-Kits and RS Components – stock number 1503954) or any of the authorised resellers:

STEAM Design Challenge: Kinetic Wind Sculptures Kinetic sculptures are not only fun to make, they are perfect for STEAMing up school campuses and classrooms! Kinetic = Movement and there is something amazing that happens when a student sees their artwork in motion. In addition to being absolutely mesmerizing, kinetic artwork requires knowledge and application of technology, engineering, artistic habits of mind, and can easily integrate into other content areas. Kinetic sculpture “Hammering Man” by Jonathan Borofsky. My favorite way to implement STEAM is through a Design Challenge, like the ones we share in our online class Designed to STEAM.

The influential Confucian philosopher you’ve never heard of A man is hiking in the countryside when he suddenly sees a toddler about to fall into an abandoned well. What will he do? Many people will instinctively run toward the toddler to save him. However, some people will simply panic, freezing in the moment of crisis. Why Academic Teaching Doesn’t Help Kids Excel In Life By Shelley Wright Academics. Most of our current school system revolves around it, and yet, I think it falls miserably short of what our kids need. To be honest, I think our academic system of education is highly overrated, at best. At worst, it destroys a number of our kids. Hear me out. Why young punks grow to like classical and jazz in older age This corresponds to a shift in lifestyle to where people are socialising far more in bars, clubs and at parties where uplifting and danceable music tends to be played. However, the preference for contemporary music plateaus in early middle age and individuals start to like sophisticated music like jazz and classical. The scientists say this marks a shift to a more solitary expression of our intellect, status and greater emotional maturity. They also found that tastes became less pretentious with far more older people liking country, folk and blues music. “There is a tendency for young people to prefer music that their parents cannot stand or find obnoxious, so there must be some developmental changes that take place as we get older,” said Dr Jason Rentfrow, senior lecturer in psychology at the University of Cambridge. “Teenage years are often dominated by the need to establish identity.