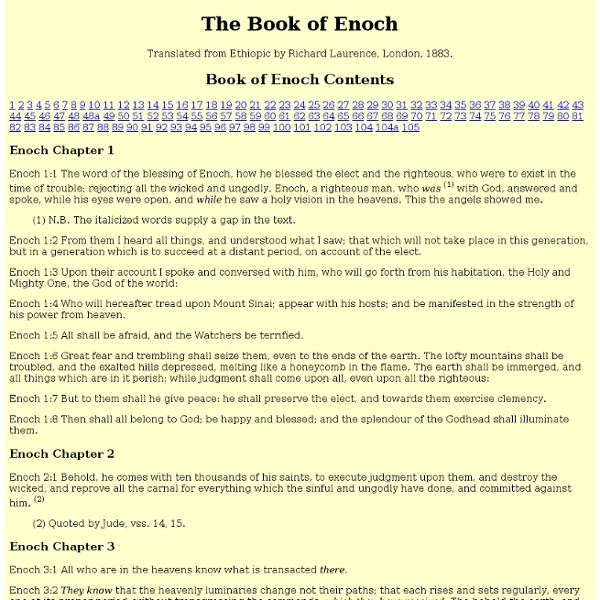 THE GOSPEL OF THOMAS The following is a fresh translation, made from the Coptic text published by Messrs. Brill of Leiden. In the preparation of this versi the following six translations have been consulted, in addition to to published by Messrs. These are the secret words which the living Jesus spoke, and Didymus Judas Thomas wrote them down. (1) And he said: He who shall find the interpretation of the words shall not taste of death. (2) Jesus said: He who seeks, let him not cease seeking until: finds; and when he finds he will be troubled, and if he is troubled, he will be amazed, and he will reign over the All. (3) Jesus said: If those who lead you say unto you: Behold, the Kingdom is in heaven, then the birds of the heaven will be before you. (4) Jesus said: The man aged in his days will not hesitate ask a little child of seven days about the place of life, and he shall live. (6) His disciples asked him and said unto him: Wilt thou that we fast? (21) Mary said to Jesus: Whom are thy disciples like?

Rare Metaphysical Books - The VOICE OF ISIS pages 1-13 'The Path' and pages 14-19 'Meaning of the Symbol' Voice of Isis - by the Order of Christian Mystics - 1926 Voice of ISIS: CHAPTER XXXIV. The Meaning of the Symbol The Seal consists of a double triangle inscribed in a circle, with an open Eye in the center and three five pointed stars in the spaces between the sides of the triangle and the circle. The circle represents Boundless Space and limitless Time in Eternity. In one sense it is the circle of the Zodiac (the pathway of our solar system) from the twelve Gates or Houses of which issues the radiant light of The Christos represented as focused in the center of the Open Eye. Thus the All-seeing Eye (the Absolute) sheds its seven-fold creative rays within its creations.

Liber AL vel Legis Liber ALvelLegis sub figurâ CCXX as delivered byXCIII = 418toDCLXVI A∴A∴ Publication in Class A Introduction IThe Book 1. The Author called himself Aiwass, and claimed to be “the minister of Hoor-Paar-Kraat”; that is, a messenger from the forces ruling this earth at present, as will be explained later on. How could he prove that he was in fact a being of a kind superior to any of the human race, and so entitled to speak with authority? 2. The study of these passages necessarily demands supreme human scholarship to interpret— it needs years of intense application. This matter is best studied under the Master Therion, whose years of arduous research have led him to enlightenment. On the other hand, the language of most of the Book is admirably simple, clear and vigorous. 3. 4. IIThe Universe This Book explains the Universe. The elements are Nuit— Space— that is, the total of possibilities of every kind— and Hadit, any point which has experience of these possibilities. IIIThe Law of Thelema*

Internet Sacred Text Archive Home Masonic E-Book Library Note: Many of the e-books in this library are several hundred pages long and include illustrations. It takes a minimum of a high-speed DSL or cable modem to download many of them. i.e. Mackey's Masonry Defined takes 3 minutes just to download the text. A Message from our Librarian Max Heindel - Rosicrucian Mysteries_An Elementary Exposition of their Secret Teachings Bibliography of the Writings and Works of Albert Pike Committee for Relief of Knights Templar and Ancient and Accepted Scotch Rite Masons Albert Pike - The Book Of The Words Freemason Instructions to All Degrees 10,000 Famous Freemasons by William R. A Charge By Any Other Name Is Still A Charge by W. Ancient and Modern Initiation by Max Heindel The Arcane Schools - Part 1 - Part 2 - Part 3 - Part 4 - Part 5 - Part 6 - Part 7 The Book of Enoch The Book of the Ancient & Accepted Scottish Rite by Charles T. Brothers and Builders; by Bro. The Builder by Joseph Fort Newton The Builder Magazine (1915 - 1930) The Kabbalah Unveiled by S.