The Data That Turned the World Upside Down - Motherboard 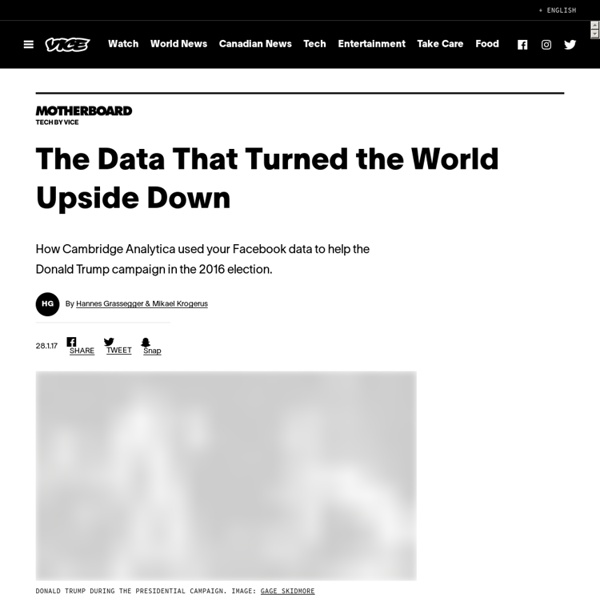 An earlier version of this story appeared in Das Magazin in December. On November 9 at around 8.30 AM., Michal Kosinski woke up in the Hotel Sunnehus in Zurich. The 34-year-old researcher had come to give a lecture at the Swiss Federal Institute of Technology (ETH) about the dangers of Big Data and the digital revolution. Kosinski gives regular lectures on this topic all over the world. He is a leading expert in psychometrics, a data-driven sub-branch of psychology. When he turned on the TV that morning, he saw that the bombshell had exploded: contrary to forecasts by all leading statisticians, Donald J. For a long time, Kosinski watched the Trump victory celebrations and the results coming in from each state. Of these three players—reflective Kosinski, carefully groomed Nix and grinning Trump—one of them enabled the digital revolution, one of them executed it and one of them benefited from it. How dangerous is big data? On November 9, it became clear that maybe much more is possible.

Profiling the European Citizen - Cross-Disciplinary In the eyes of many, one of the most challenging problems of the information society is that we are faced with an ever expanding mass of information. Selection of the relevant bits of information seems to become more important than the retrieval of data as such: the information is all out there, but what it means and how we should act on it may be one of the big questions of the 21st century. If an information society is a society with an exponential proliferation of data, a knowledge society must be the one that has learned how to cope with this. Profiling technologies seem to be one of the most promising technological means to create order in the chaos of proliferating data. In this volume a multifocal view will be developed to focus upon what profiling is, where it is applied and what may be the impact on democracy and rule of law.

The complete list of all 33 false things Donald Trump has said as president so far U.S. President Donald Trump makes frequent false claims about matters big and small. The Star is planning to track them all. Contact Daniel Dale at ddale@thestar.ca if you hear Trump say anything you know is false or should be checked. Last updated: Feb. 3, 2017 33. The British data-crunchers who say they helped Donald Trump to win It’s the Brits wot won it. That is, the US presidential election was won for Donald Trump with the help of a bunch of British nerds — data scientists from a company called Cambridge Analytica. This was the claim, at least, made by the company in a press release a couple of days after the election. ‘No one saw it coming.

Watchdog to launch inquiry into misuse of data in politics The UK’s privacy watchdog is launching an inquiry into how voters’ personal data is being captured and exploited in political campaigns, cited as a key factor in both the Brexit and Trump victories last year. The intervention by the Information Commissioner’s Office (ICO) follows revelations in last week’s Observer that a technology company part-owned by a US billionaire played a key role in the campaign to persuade Britons to vote to leave the European Union. It comes as privacy campaigners, lawyers, politicians and technology experts express fears that electoral laws are not keeping up with the pace of technological change.

The Two Kinds of Trump Voters It’s the hottest question in Washington: Will white working-class voters still support President Donald Trump in four years if he can’t deliver on his campaign promises? Republicans want to know whether they can keep these voters while deep-sixing Trump’s protectionist and Big Government ideas; Democrats, for their part, are asking whether it is worth courting white working-class support at all. If these perplexing voters have crossed the aisle for good, then Democrats can consolidate their support from minorities and urban cosmopolitans and seek to broaden their appeal to centrists wary of Trump’s instability and radicalism. Story Continued Below But before Democrats decide whether or not to abandon white working-class voters altogether, here’s something they need to keep in mind: Trump’s base is not a monolith. First, there are those who support Trump primarily because they agree with the authoritarian, nationalist moral order he seeks to establish.

The truth (sort of) about fake news One Sunday at the end of last year, a 28-year-old man with a beard, a pistol and an AR-15 assault rifle walked into a Washington DC pizza restaurant called Comet Ping Pong looking for Hillary Clinton’s child sex slaves. He didn’t find any. He spent 45 minutes there, also looking for secret tunnels, but he didn’t find any of those, either. His name was Edgar Maddison Welch, and he’d driven there from his home, which was 350 miles away in North Carolina. At one point he appears to have opened fire, either into the walls or the ceiling. Nobody was hurt.

Did Cambridge Analytica influence the Brexit vote and the US election? On Saturday 23 June 2012, David Miller received an angry email. Miller, a professor of sociology at Bath University, runs something called the Powerbase website, which records the political and business connections of influential people. The writer of the email, who seemed to be based in Russia, explained that “all the content” about Nigel Oakes, a PR fixer and political consultant, published on the website, was “fake” and demanded that it be taken down. Miller asked for the inaccuracies to be pointed out so that he could make corrections, only for Oakes himself to make contact, a rare event given that, according to ex-colleagues, the old Etonian likes to cultivate an air of mystery. “Nice enough, bit machiavellian,” one said. An ex-boyfriend of Lady Helen Windsor, Oakes once ran a mobile disco before joining the Tories’ favourite advertising agency, Saatchi & Saatchi.

A Newsweek reporter is suing the federal government to learn how it vetted Trump's advisers for security clearances — Quartz As Donald Trump lunches with Japanese prime minister Shinzo Abe, reportedly to talk about the future of global trade, it’s worth assessing whether or not the new US president will really attempt to renegotiate an important trade pact closer to home: the North America Free Trade Agreement (NAFTA) between the US, Canada, and Mexico. NAFTA, since it already governs a significant share of economic activity, matters much more than Trump’s decision to officially pull out of the Trans-Pacific Partnership, a not-yet-sealed deal that looked unlikely to come into force regardless of who won the US election. But shaking up NAFTA would have real effects on existing business—which is why Trump will likely prefer cosmetic changes to it over doing anything meaningful. Trump has talked tough, against Mexico specifically, about renegotiating NAFTA. But there’s plenty of reason to believe that Trump will bow to special-interest concerns supporting the pact as is. Hmm.

The myth that British data scientists won the election for Trump Claims that social media data won the presidency are greatly exaggerated A piece of data science mythology has been floating around the internet for several weeks now. It surfaced most recently in Vice, and it tells the story of a firm, Cambridge Analytica, that was supposedly instrumental in Donald Trump’s campaign. Big data and psychographic profiling helped Donald Trump win the US presidential election Contrary to expectations from polls, Donald Trump secured a surprise victory in the 2016 US Presidential Election. After the victory, there has been a scramble to explain the results. Echo chambers on social media platforms where biased misinformation were circulated were speculated to have contributed to the surprise win. Barack Obama accused Facebook of allowing fake news stories to spread on the platform, which helped Trump win.

Historian Richard Evans says Trump’s America isn’t exactly like the Third Reich—but it’s too close for comfort. Torsten Silz/Getty Images Richard Evans established himself as arguably the pre-eminent historian of 20th-century Germany with his astonishing trilogy on the rise and fall of the Third Reich. Beginning after the cataclysm of the First World War with The Coming of the Third Reich; continuing with the Nazi regime’s first six years in power; and concluding with Nazism’s military aggression, genocide, and eventual defeat, Evans’ books explore Germany from the perspective of both its leaders and its citizens, including perpetrators, victims, and everyone in between.

Revealed: how US billionaire helped to back Brexit The US billionaire who helped bankroll Donald Trump’s campaign for the presidency played a key role in the campaign for Britain to leave the EU, the Observer has learned. It has emerged that Robert Mercer, a hedge-fund billionaire, who helped to finance the Trump campaign and who was revealed this weekend as one of the owners of the rightwing Breitbart News Network, is a long-time friend of Nigel Farage. He directed his data analytics firm to provide expert advice to the Leave campaign on how to target swing voters via Facebook – a donation of services that was not declared to the electoral commission.

On What Facebook Knows – An Interview with the Man Behind Facebook’s Personality Experiment Earlier this year, researchers from The University of Cambridge and Stanford University released a report which looked at how people’s Facebook activity could be used as an indicative measure of their psychological profile. What they found was pretty amazing – using the results of a 100 question psychological study, which had been completed by more than 86,000 participants through an app and mapped alongside their respective Facebook likes, the researchers developed a system which could then, based on Facebook activity alone, determine a person’s psychological make-up more accurately than their friends, their family – better even than their partners. The research was widely reported with headlines like “Facebook Knows You Better Than Your Therapist”, stoking the coals of ongoing debates about internet privacy and the all-knowing power held by Facebook.