Scanning, ranking and sharing the best management ideas in the world 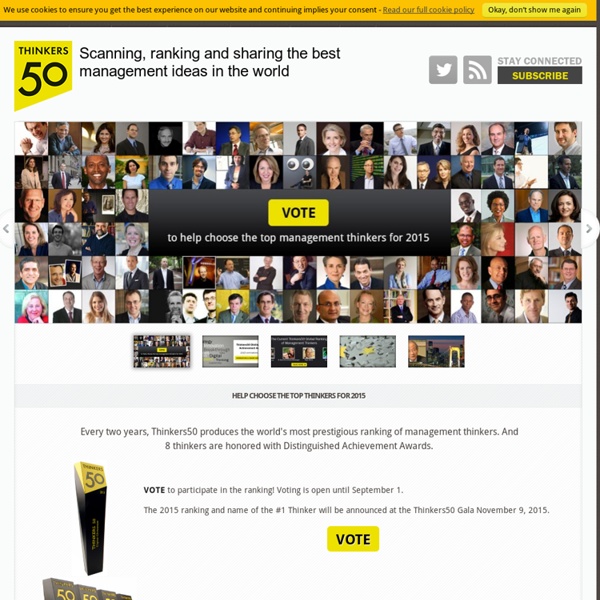 The Thinkers50 ranked thinkers and award winners are engaged, accomplished, creative and inspiring. Part of our job at Thinkers50 is to follow books being published, apps being developed, ideas being explored and refined, and topics appearing in the media from this remarkable group. We’ll share them with you here. And we encourage you to contact us with news about the Thinkers you’d like us to share. From the Thinkers

7 Instant Ways to Boost Your Energy fMotivation aProductivity hHealth cSelf Improvement Inside Amazon: Wrestling Big Ideas in a Bruising Workplace Amazon may be singular but perhaps not quite as peculiar as it claims. It has just been quicker in responding to changes that the rest of the work world is now experiencing: data that allows individual performance to be measured continuously, come-and-go relationships between employers and employees, and global competition in which empires rise and fall overnight. Amazon is in the vanguard of where technology wants to take the modern office: more nimble and more productive, but harsher and less forgiving. “Organizations are turning up the dial, pushing their teams to do more for less money, either to keep up with the competition or just stay ahead of the executioner’s blade,” said Clay Parker Jones, a consultant who helps old-line businesses become more responsive to change. On a recent morning, as Amazon’s new hires waited to begin orientation, few of them seemed to appreciate the experiment in which they had enrolled.

Differentiate Between Goals and Resolutions to Aid in Personal Achievement Many popular new year resolutions such as "lose 25 lbs" or "run a marathon" are actually goals, not resolutions. If there is a specific achievement it's a goal, but permanent changes to your life are resolutions since you keep doing them every day and not just until a specific achievement is reached. Psychology weblog The Happiness Project points out that goals are great for happiness but can easily cause discouragement if you don't hit your goal on time. What if it takes longer than you expected?

You probably don't want to work for Amazon Amazon is known for its cutthroat efficiency and harsh tactics; it's what makes it possible to get a pack of toilet paper delivered to your door in less than 24 hours. But CEO Jeff Bezos' love of precision and data goes far beyond fulfilling orders and undercutting competitors' prices. It permeates every aspect of the workplace.

Apologize- Even if You're Right - PEOPLE TOOLSPEOPLE TOOLS This article was written on April 22, 2014 by Alan C. Fox We all know that apologizing can be one of the most difficult, yet helpful things we can do in our relationships with friends, loved ones, and colleagues. Take these two contrasting perspectives as an example of the paradoxical nature of the simple art of apology: “Faultless to a fault.” 7 'digital nomads' explain how they live, work and travel Feel miserable working in a cubicle or living in a boring town? The Internet has revolutionized the term ‘work’ today, bringing new opportunities and employment that didn’t exist until recently. For many, the Internet is an opportunity to combine work and traveling the world. The term ‘digital nomad’ is frequently overused and often simply means hacking around in cheap accommodation with a small level of income to keep you going. But, there are some folks out there who have shown that you can combine a career with the freedom to travel on your own schedule. To cut through the garbage, we caught up with seven bona fide location independent workers and business owners about what they do, how they do it, and what steps others aspiring to follow them can take.

"Cannabis Chassidis" Book Party with Yoseph Leib ibn Mardachya, New York City, Sept. 12, 2012 "Cannabis Chassidis: The Ancient and Emerging Torah of Drugs" Book Presentation with author Yoseph Leib ibn Mardachya 7PM, Wednesday, Sept. 12, 2012 Bluestockings Bookstore 172 Allen Street New York City, NY Is marijuana kosher? The Seven Sins of Deadly Meetings Naomi Chavez, an internal consultant for Cisco Systems, one of Silicon Valley's leading network-equipment manufacturers, is frustrated: "We have the most ineffective meetings of any company I've ever seen." Kevin Eassa, vice president of operations for the disk division of Conner Peripherals, another Silicon Valley giant, is realistically resigned: "We realize our meetings are unproductive. A consulting firm is trying to help us, and we think they've hit the mark. But we've got a long way to go." Richard Collard, senior manager of network operations at Federal Express, is simply exasperated: "We just seem to meet and meet and meet and we never seem to do anything." Meetings are the most universal — and universally despised — part of business life.