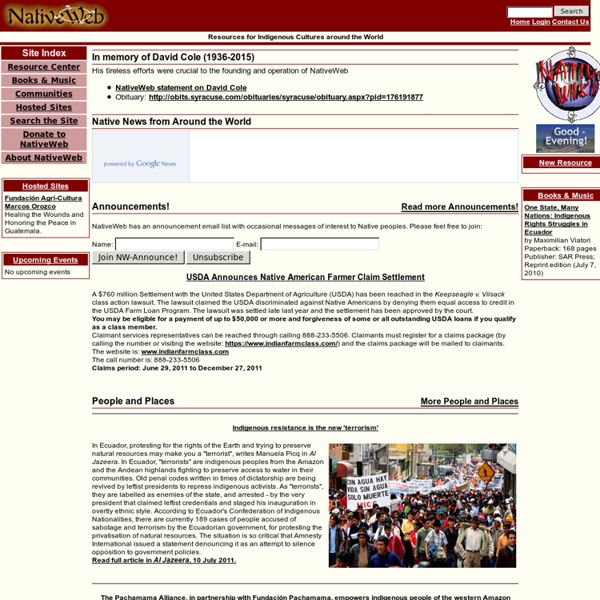 Reencounter of the Original Peoples and Nationalities of Abya Yala in Ecuador Representatives of the original peoples and nationalities of the Americas returned to Ecuador last week for the twentieth anniversary of a historic gathering that advanced hemispheric unity. The Continental Encounter of the Original Nationalities and Peoples of Abya Yala met from June 14 to 16. Abya Yala is a word for the Americas in the language of the Kuna people in Panama that has gained broad usage as an aboriginal term for the hemisphere. In July 1990, the Confederation of Indigenous Nationalities of Ecuador (CONAIE) together with the National Indigenous Organization of Colombia (ONIC) and the South American Indian Information Center (SAIIC) organized the First Continental Conference on Five Hundred Years of Indigenous Resistance. Four-hundred representatives from 120 Indigenous nationalities and organizations throughout the Americas formed a united front against oppression, discrimination, and exploitation.

Greeting Translations of the word welcome shown in many places frequented by foreigners or tourists to welcome people of all different nationalities. Greeting is an act of communication in which human beings intentionally make their presence known to each other, to show attention to, and to suggest a type of relationship (usually cordial) or social status (formal or informal) between individuals or groups of people coming in contact with each other. Greetings sometimes are used just prior to a conversation or to greet in passing, such as on a sidewalk or trail.

‘The last free people on the planet’ <div class="greet_block wpgb_cornered"><div class="greet_text"><div class="greet_image"><a href=" rel="nofollow"><img src=" alt="WP Greet Box icon"/></a></div>Hello there! If you are new here, you might want to <a href=" rel="nofollow"><strong>subscribe to the RSS feed</strong></a> for updates on this topic.<div style="clear:both"></div></div></div> In small pockets around the world live isolated indigenous communities, groups that, even though they have had run-ins with their neighbours or Westerners, prefer to avoid or resist any further contact.

Statement of beliefs of the Ontario Consultants on Religious Tolerance (OCRT) About this website Sponsored link. The importance of faith/belief statements: We feel that every denomination, para-church organization, religious group, and religious web site should consider creating a statement of belief or faith and displaying it prominently. This is particularly important among Christian groups who may use the term "Christian" to refer to only the Roman Catholic Church, or only to Evangelical Protestantism, or to the full range of Christian denominations and beliefs, or to some other subset of the religion.

Over 130 Renowned Scholars Call on President Correa to Defend Yasuní-ITT Amazon WatchFOR IMMEDIATE RELEASE | September 19, 2013 For more information, contact:Ivonne Yanez (in Ecuador) at +593 232 11103 or sudamerica@oilwatch.org Kevin Koenig (in Ecuador) at +593 99 794 9041 or kevin@amazonwatch.org Adam Zuckerman at +1 207 838 5806 or adam@amazonwatch.org Quito, Ecuador – This week more than 130 renowned academics and intellectuals from all over the world sent a letter to Ecuadorian President Rafael Correa. Scholars including Vandana Shiva, James Hansen, Naomi Klein, Boaventura de Souza Santos, Arturo Escobar, and Timothy Mitchell, among others, headed up the letter.

World Heritage List #: As for 19 Natural and Mixed Properties inscribed for geological values before 1994, criteria numbering of this property has changed. See Decision 30.COM 8D.1 Sarayaku This article is about the village in Pastaza Province, Ecuador. "Sarayaku" or "Sarayacu" is a common Quechuan toponym, see e.g. Sarayacu District, Peru. Sarayaku (Quechuan: "The River of Corn"; also transcribed Sarayacu) is a territory and a village, situated by the Bobonaza River in the province of Pastaza in the southern part of the Amazonic region of Ecuador, el Oriente. The territory incorporates a number of villages and has a total population figure between 1,000 and 2,000 Kichwa speaking people, who call themselves the Runa people of Sarayaku, or the Sarayaku people. They are organized in “Organización de Pueblos Indígenas de Pastaza”, OPIP.

Zeitgeist and the Venus Project The Zeitgeist Movement has already attracted a large following, claimed to be over a half a million people so far — worldwide. Numerous Facebook groups — one with more than 70,000 people, another with more than 35,000, and still one more with almost 20,000 — transmit instructions and ideas to the activists around the globe. Various local and national groups have memberships in the thousands, using social-networking services to coordinate their campaigns and events. It is led by a man who calls himself Peter Joseph. He refuses to release his last name, citing privacy concerns about his family and friends.

Books of the decade in ecocultural theory What books, published over the last ten years, have contributed most cogently and profoundly to our thinking about the relationship between culture and nature, ecology and society? (That’s to name just two of the dualisms this blog regularly throws into question.) Who have been the most important ecocultural theorists so far this century? And which are the most important publishers in this area? Below is a highly subjective “top 10″ (sort of) of the books that have most influenced my own thinking on these issues. It aims for a certain representativeness, a balance between the rigorously theoretical and the theorized-applied, the established names and the new, and between the many fields and styles of thinking I’m aiming to encompass on such a list.

Diotima: Women & Gender in the Ancient World Call for Collaborators to The On-line Companion to The Worlds of Roman Women The On-Line Companion to the Focus Reader, The Worlds of Roman Women, expands the book's wide representation of Latin texts by and about women dating from the earliest periods through the fourth century CE. The medium of a website, moreover, offers the opportunity to integrate visuals to texts, thus enabling users to make connections between language and material culture. The Companion has two major parts. On animism, multinaturalism, & cosmopolitics Since there isn’t much available in English about Philippe Descola’s writings on animism, I thought I would share a piece of the cosmopolitics argument I mentioned in my last post. It will appear, in modified form, in the concluding chapter of the SAR Press volume mentioned there. Most of the volume will consist of ethnographic case studies from around the world, but these will be informed by the theoretical conversations of the week we spent at the School of Advanced Research in Santa Fe. Following this excerpt I have added some comments relating the ideas (discussed here) of Descola, Latour, and Stengers to some of the concepts I’ve been working with from Whitehead, Peirce, and the fields/discourses of biosemiotics and panpsychism. I haven’t seen these connections made (in this way, at least) in any of the literature by or on these authors, and I’m still working out these ideas myself, so that part is work-in-progress.