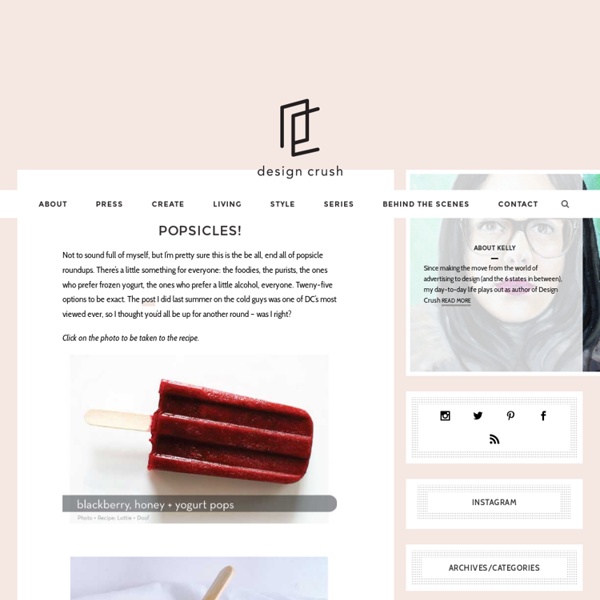 Not to sound full of myself, but I’m pretty sure this is the be all, end all of popsicle roundups. There’s a little something for everyone: the foodies, the purists, the ones who prefer frozen yogurt, the ones who prefer a little alcohol, everyone. Tweny-five options to be exact. The post I did last summer on the cold guys was one of DC’s most viewed ever, so I thought you’d all be up for another round – was I right? Click on the photo to be taken to the recipe. All photos and recipes copyright of their respective source unless otherwise noted.

The Astounding Design Of Eixample, Barcelona Constructed in the early 20th century, Eixample is a district of the Spanish city of Barcelona known for the urban planning that divided the district into octagonal blocks. Influenced by a range of schools of architecture, Eixample Barcelona was designed in a grid pattern with long streets, wide avenues, and rounded street corners. Despite being in the center of a thriving European metropolis, the district provides improved living conditions for inhabitants including extensive sun light, improved ventilation, and more open green space for public use. And of course, the result from the grid-like structure is astounding from above: How To Make Perfect Brownies I’ve tried lots of brownie recipes: Boxes, scratch, frosted, plain, nuts, chips, fudge … Each of them has something to like, but depending on my mood I might want a change of pace. Not any more. My wife found this recipe, and it’s perfect. I’m done looking. This is the brownie recipe that I’ll use from now on.

Chocolate Chip Lava Cookies I am so in love with these darn chocolate lava cookies! What is it about a warm, gooey chocolate chip cookie stuffed with decadent, rich, melted chocolate that makes it so irresistible?? Especially when topped with vanilla ice cream. These are one of Kev’s favorite homemade treats, and he usually asks me to make them at least once a week. Death By Oreo Cupcakes They are probably the best Oreo cakes I have ever tried. A lot of cake's that I have experimented with before are like a vanilla cake with bits of Oreo in them, which didn't really give them enough Oreo flavor. But these were a lot better. Cinnamon Roll Pancakes Updated 9/22/11 to Add: If you’re coming here to sample these delicious Cinnamon Roll Pancakes, you just might like the latest recipe that I’ve posted for Pumpkin Cinnamon Roll Pancakes too. And Gingerbread- Cinnamon Roll Pancakes too. Enjoy!

Finds: Awesome Cake Designs Posted by C on Wednesday, June 13, 2012 · [via thisisnthappiness.com] I’m not really that big fan of cakes. The other day, I found these really amusing cake designs that make me want to taste one! Would you want to try that hot chocolate cupcake up there? Or this chocolate flower cake below? Better-Than-Crack-Brownies I’m sorry for doing this to you. I really am. But see, last Friday while I was on a 10-hour road trip heading for vacation, I received this recipe from a reader named Liz. Family Kitchen - StumbleUpon Bring Your Child's Favorite Characters to Life with These Disney-Themed Lunches Healthy Mickey-Shaped PB&J Muffins: A Breakfast the Whole Family with Love A Yummy Instant Pot Chicken and Rice Recipe Even the Pickiest Eaters Will Love This 3-Ingredient Coffee Fudge Is the Best Morning Pick-Me-Up

Desserts That Are Almost Too Cute To Eat & Pretty Please Us Blog: Your guide to fashion, beauty, style & everything else in between. Hi, my name is Himani and I’m a sugar addict. But the only thing that holds me back from devouring a sinful concoction is if it looks super cute. You know… because cute desserts deserve to live longer than the ugly ones (I’m going to some sort of sugar-y hell for that one). Check out some of the cute desserts that you will think twice before you put them in your belly: Football themed Chocolate Covered Strawberries (purchase) or (make your own). Go 49ers! The Hungry Mouse - StumbleUpon Sooner or later, all my conversations inevitably turn to food. Don’t believe me? Call me up sometime and try to, say, sell me some insurance. I guarantee that before we get off the phone, I’ll be giving you my recipe for blackberry jam. I can’t help it.