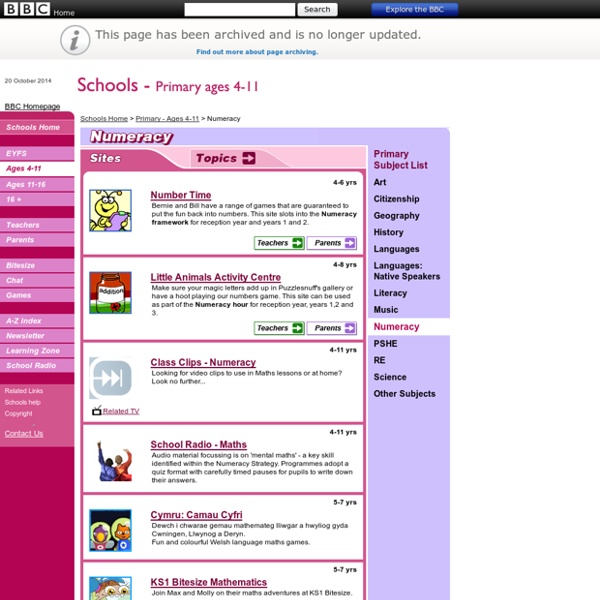 ptolemy.co.uk “Furbles are the shape of things to come: this software is technology at its best and well worth the money.” John Dabell, TES Magazine Furbles started life as an idea for teaching statistics in an interesting way with children from KS1 to KS3. The original version was published in 2003 online, and its popularity spread. It has been downloaded and used over 20,000 times in the last five years. In 2006 Sherston Software commissioned me to write a commercial version. Coxhoe Primary School - Numeracy Considerable importance is attached to the children achieving and understanding mathematical processes, concepts and skills. A favourable attitude is encouraged by presenting it in an interesting and enjoyable way, allowing the children to actively participate in the learning process, thus creating a sense of achievement and confidence. There is a strong emphasis on the development of mental arithmetic and giving opportunities for pupils to use and apply mathematics in real life situations. Maths is taught through a daily Numeracy lesson which follows the principles of the Primary Numeracy Framework. In order to develop Mathematical skills some pupils may be set for this Numeracy hour and move either to the year group above for extension as More Able (MA) mathematicians or to the year group below for consolidation of skills.

Sumdog Sumdog > Sumdog's features > Games Sumdog's maths games are all free to play, whether you're at home or in school. (Why are they free?). Most of Sumdog's games are multiplayer - which means you can choose to play against other Sumdog users around the world. Although the games are all different, they all have one thing in common: you need to answer maths questions to make progress. Each game can be used to practise any of Sumdog's topics - so you never need to be bored while practising your maths! Phonics games Phonics games will help your child to practise sounding out words, which will help them to read. Initially, children will learn basic letter sounds, such as "c-a-t" for "cat". Later they will move on to sounds such as "th", "sh" and "ch", then "oo", "oa" and so on. Once they recognise a few basic letter sounds, they will be able to work out what a written word says for themselves, a skill which they will be very proud to show off! Follow the links below to the free phonics games. Your child will have lots of fun while developing their phonic knowledge and skills.

Cool Math 4 Kids Times Tables Help - How Multiplying Works (times tables) Here's another one: This means that you have three groups of 5! Put the three groupstogether... How many pentagons do you have? Count them... So you want to support Maths learning with an iPad? iPad apps Published on April 10th, 2012 | by Mark Anderson When thinking about using an iPad to support learning, it is important to remember that the iPad supports learning. It is not going to do the teaching for you. Division…Bring It! We’re in the midst of multiplication and division madness in my classroom! To help the kids understand the termonology associated with a division problem, I created this anchor chart. I also revamped an activity I posted last year.

How to measure butter & margarine How to Measure Butter Is 1/2 lb. of butter the same as 1/2 cup of butter? The recipe writers of the world have entered into a conspiracy to make cooking with butter way more complex than it should be. In one recipe they ask for a half-cup of butter. In the next, they ask for 8 tablespoons.

New IBM App Presents Nearly 1,000 Years of Math History Math nerds and historians, it’s time to get excited. Minds of Modern Mathematics, a new iPad app released Thursday by IBM, presents an interactive timeline of the history of mathematics and its impact on society from 1000 to 1960. The app is based on an original, 50-foot-long “Men of Modern Mathematics” installation created in 1964 by Charles and Ray Eames. Minds of Modern Mathematics users can view a digitized version of the original infographic as well as browse through an interactive timeline with more than 500 biographies, math milestones and images of relevant artifacts. IBM hopes that classes and students will use the app, provoking more people to pursue math, science or technology-related educations and jobs.

Free Online Algebra Games for kids Our free educational games are used by more than 20,000 teachers & homeschooling parents! Equation Solving Game Algebra Rags to Riches www.quia.com In this game you earn money prize as you solve equations. You start with easy ones, and the equations get harder as the prize gets higher. Curriculum Mapping We thought it would be helpful for maths teachers if we identified our favourite "rich tasks" from the NRICH collection. These resources have been chosen because they are ideal for developing subject content knowledge as well as mathematical thinking and problem-solving (process) skills. The documents give links to the different topics in the curriculum. We know they are transferable and useful to all teachers, whatever curriculum they follow.

OCSD Interactive Games Design Your Own Games Pre-Made Games Matching Game Directions- In this game you can match up words. The Order of Operations Millionaire Game In this millionaire-style game, students will use order of operations to solve math problems involving addition, subtraction, multiplication, and division including exponents and parentheses. This is a single-player game that can be played on computers, iPads, and other tablets. You do not need to install an app to play this game on the iPad. How many points can you earn? Play this fun and interractive game to show off your math skills.