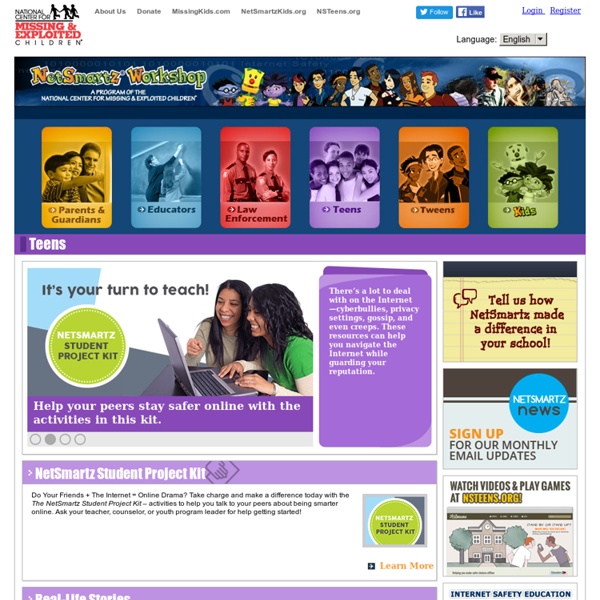 There’s a lot to deal with on the Internet—cyberbullies, privacy settings, gossip, and even creeps. These resources can help you navigate the Internet while guarding your reputation. These videos feature the real stories of actual teens who have been victimized online and want you to learn from their mistakes. When you hear their stories, you’ll learn to evaluate your own online choices and understand why talking to an adult you trust is so important. Teens have a lot to say—especially about online drama. Watch this collection of videos to hear what your peers are saying about issues like cyberbullying, social networking, and online gaming. If you or someone you know has been victimized by someone you met online, report them to www.cybertipline.com.

I Am A Bully’s Dream Dear Friend: I am a bully’s dream. Think about it. No arms. No legs. It’s pretty hard to disguise my shocking appearance. Online Safety Listen Cyberbullying It's not just strangers who can make you feel uncomfortable. Cyberbullying refers to cruel or bullying messages sent to you online. Facts About Bullying Reporters and other content creators need the facts quickly. This section pulls together fundamental information about bullying you can use to build your pieces, including: This page was last reviewed on 10-14-2014. Definition In 2014, the Centers for Disease Control and Department of Education released the first federal uniform definition of bullying for research and surveillance.1 The core elements of the definition include: unwanted aggressive behavior; observed or perceived power imbalance; and repetition of behaviors or high likelihood of repetition.

Statistics on Bullying, Cyberbullying and Suicide Traditional Bullying Nearly 1 in 3 students (27.8%) report being bullied during the school year (National Center for Educational Statistics, 2013). The National Crime Victimization Survey of the 2011 school year found that 27.8% of students (ages12-18) reported being bullied at school, while 9% reported being cyber-bullied anywhere (NCES, 2013).

The Golden Spoons: MiniVan Conversations: T-H-I-N-K I don't know what it is about being in our minivan that almost instantly incites an altercation between my girls - especially between the oldest two. As soon as they get in from the carpool line after school, it starts. Someone says the other is annoying. One tells the other to shut up. They argue over who sits where. Online Citizenship Explained by Common Craft Most people are good citizens in the offline world. They are kind to others, they obey laws and want their community to be a better place. But these days many of us are also citizens of the online world. We participate in discussions, share photos, and get help using websites. While this makes communication faster and easier, it can also cause problems. Stewart is a good guy. Cyber Bullying Statistics Cyber bullying statistics refers to Internet bullying. Cyber bullying is a form of teen violence that can do lasting harm to young people. Bullying statistics show that cyber bullying is a serious problem among teens.

Parent's Guide to Social Media - Babble I finally joined Instagram, and then I fell down a rabbit hold of tween social media usage. Some of what I found was innocuous, some was not. As soon as I joined, the app used my phone’s contact list to tell me who I might want to follow. 27 Cyber Bullying Statistics and Facts Cyber Bullying Statistics and Trends Cyberbullying is considered a form a bullying that transpires with electronic technology. This can include text messages, emails, and social media sites.

Contronyms: Negatives Without Positives Suffixes Sometimes antonyms are formed by appending the suffixes -ful and -less onto English words, as with joyful and joyless. But sometimes one is an English word and the other isn't. For example, reckless is an English word, and reckful is not. Office of the Attorney General : Cyberbullying Cyberbullying is when a child, preteen or teen is tormented, threatened, harassed, humiliated, embarrassed or otherwise targeted by another child, preteen or teen using the Internet, interactive and digital technologies or mobile phones." - Source: StopCyberbullying.org The Internet makes it possible for "cyberbullies" to harass their victims at any time of the day, even in their own homes. Using chat rooms, email, instant messaging, and websites, cyberbullies can make threats, share gossip, spread lies or distribute embarrassing pictures to a wide audience while maintaining some anonymity. How it can happen Direct attacks

Internet Safety Tips for Kids and Teens Internet Safety Tips for Kids and Teens 1. Spend time having fun with your parents online and helping them understand technology! Why Procrastinators Procrastinate PDF: We made a fancy PDF of this post for printing and offline viewing. Buy it here. (Or see a preview.) pro-cras-ti-na-tion |prəˌkrastəˈnāSHən, prō-| noun the action of delaying or postponing something: your first tip is to avoid procrastination. Who would have thought that after decades of struggle with procrastination, the dictionary, of all places, would hold the solution.