Pyramid Discoveries Will Force History to be Re-Written 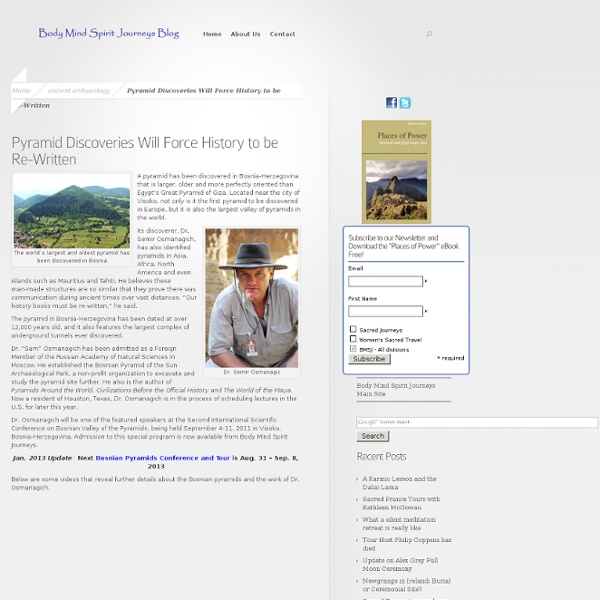 The world’s largest and oldest pyramid has been discovered in Bosnia A pyramid has been discovered in Bosnia-Herzegovina that is larger, older and more perfectly oriented than Egypt’s Great Pyramid of Giza. Located near the city of Visoko, not only is it the first pyramid to be discovered in Europe, but it is also the largest valley of pyramids in the world. Dr. Semir Osmanagic Its discoverer, Dr. The pyramid in Bosnia-Herzegovina has been dated at over 12,000 years old, and it also features the largest complex of underground tunnels ever discovered. Dr. Dr. Below are some videos that reveal further details about the Bosnian pyramids and the work of Dr. These four videos show an interview of Dr. Related:  Egypt

Cracking the Hieroglyphic Code" The earliest attempt at translating hieroglyphics came well before the discovery of the Rosetta Stone. A fifth-century scholar named Horapollo set up a translation system based on hieroglyphics' relation to Egyptian allegories. After Horapollo's hypothesis, 15 centuries of scholars dedicated themselves to a false translation system. De Sacy, who had translated the Demotic portion, tried his hand at the hieroglyphic inscription, but he failed, too. Thomas Young made a significant breakthrough in 1814 when he discovered the meaning of a cartouche [source: BBC]. Identifying the name of the pharaoh Ptolemy, Young was able to make some progress with his translation. Champollion began his linguistic education in 1807 under de Sacy and became familiar with the languages and skills that would aid in his translation of hieroglyphics. In 1822, Champollion got his hands on some very old cartouches. Next, we'll learn about the vast world that opened up after hieroglyphics could be read.

Real life experiments that reveal the ancient art and techniques of building Egyptian pyramids Copyright © 2006 by Mike Molyneaux New insights into ancient pyramid construction techniques presented in this article include the following:- [1] The use of battering rams to create acoustic energy for quarrying, shifting and positioning stones. [2] The use of counter-ramps with counter-weight principles for hauling massive stones uphill. [3] The use of overlapping planks and rollers to create an auto-aligning, auto-braking system for the ramps. [4] The use of leveraging towers with counter-weights for lifting stones out of a quarry and onto rollers. [5] Submerging large stones in watery mud for transporting them down rivers or along canals. [6] Partially completed courses of the pyramid forming a spiral staircase to support a ramp to the inner chambers. 1 Actual experiments using scale models A new, realistic set of trials and experiments using scale models or children have now revealed how easily large stones can be transported with rather primitive technology.

Egyptian Symbols and Definitions Djed It is believed that the Djed is a rendering of a human backbone. It represents stability and strength. It was originally associated with the creation god Ptah. Djew Which means mountain, the symbol suggests two peaks with the Nile valley in the middle. Feather of Maat Represents truth, justice, morality and balance. Fetish of Osiris An animal skin hanging from a stick, this is a symbol of Osiris and Anubis. Flail and Crook A symbol of royalty, majesty and dominion. Heb The heb glyph represents an alabaster bowl. Heb-Sed The Heb-Sed glyph Is a combination of the heb glyph and the sed glyph. Hedjet The White Crown. Ieb This symbol represents a heart. Imenet These symbols represent the west or western desert AKA the land of the dead. Ka The ka is usually translated as "soul" or "spirit" The ka came into existence when an individual was born. Khepresh The blue crown was a ceremonial crown often worn in battle. Khet This symbol represents a lamp or brazier on a stand from which a flame emerges. Maat

Top 10 Myths About Ancient Egypt History The Ancient Egyptians are shrouded in an aura of mystery and intrigue, cultivated by continuing archeological discoveries. Unfortunately, the sense of awe that pervades Ancient Egypt has also produced countless myths. This list will investigate the most common misconceptions about Ancient Egypt, and include some interesting digressions that will illuminate new areas of their advanced culture. Cleopatra Was Beautiful Cleopatra VII, the last Pharaoh of Ancient Egypt, has always been a cultural figure, renowned for her alluring beauty. Reading about the Ancient Egyptians with their pyramids, mummies and imposing gods, it is easy to reach the conclusion that they were preoccupied with death. Listverse attracts a very rational crowd, but unfortunately there are some who believe that the Egyptians were in contact with aliens. Many believe that we have found out everything we can about Ancient Egypt, and that Egyptology is a dead and buried subject. Pharaohs Killed Servants