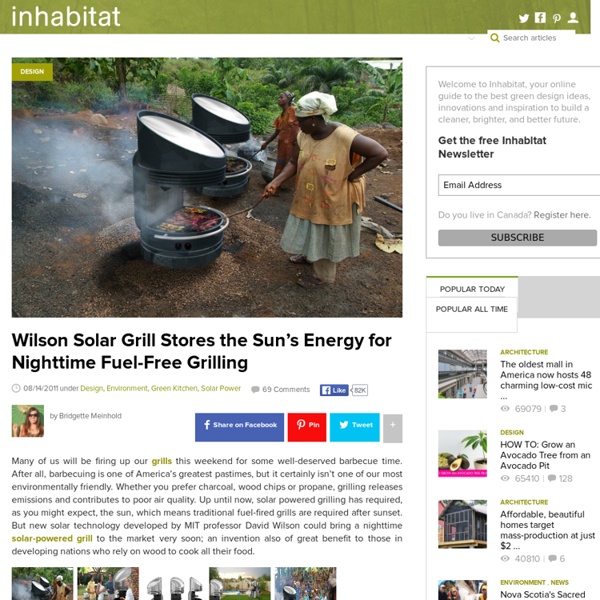 Many of us will be firing up our grills this weekend for some well-deserved barbecue time. After all, barbecuing is one of America’s greatest pastimes, but it certainly isn’t one of our most environmentally friendly. Whether you prefer charcoal, wood chips or propane, grilling releases emissions and contributes to poor air quality. Up until now, solar powered grilling has required, as you might expect, the sun, which means traditional fuel-fired grills are required after sunset. Wilson’s technology harnesses the sun and stores latent heat to allow cooking times for up to an amazing twenty five hours at temperatures above 450 degrees Fahrenheit. “There are a lot of solar cookers out there,” says Wilson, “but surprisingly not many using latent-heat storage as an attribute to cook the food.” A group of MIT students are working with the technology to develop a prototype solar grill. + Solar Grill on Barbecue Lovers Via Treehugger Images ©Derek Ham Related:  Energy

Milan's Vertical Forest Wednesday, 12 October 2011 GreenMuze Staff Milan’s Vertical Forest from Stefan Boeri Architects. The Bosco Verticale (Vertical Forest) will be the greenest building in Milan when completed, which is one of Europe’s most polluted cities. Designed by Stefan Boeri Architects, as part of their BioMilano vision to incorporate 60 abandoned farms into a greenbelt surrounding the city. The Bosco Verticale building has a green façade planted with dense forest systems to provide a building microclimate and to filter out polluting dust particles. The living bio-canopy also absorbs CO2, oxygenates the air, moderates extreme temperatures and lowers noise pollution, providing aesthetic beauty and lowering living costs. Each apartment balcony will have trees (900 plantings are planned for the two buildings) that will provide shade in the summer and drop their leaves in winter to allow in winter sunlight. Visit: Via Inhabitat

Tech Talk - Tensions Over Oil in the South China Sea Posted by Heading Out on August 12, 2012 - 4:39am Topic: Supply/Production Tags: brunei, china, malaysia, oil reserves, oil rig, paracel islands, philippines, south china sea, spratly islands, taiwan, thailand, vietnam [list all tags] In the introductory remarks to these posts on Chinese energy supplies and usage, I mentioned that one of the concerns beginning to be evident lies in disputes over the ownership of some of the oilfields offshore. Disputes over ownership have been continuing for some time, and this week was no exception, with Chinese moves to create a new city, Sansha, on Woody Island and thereby strengthen their claim to the region. Woody Island, or Yongsing, lies in the Paracel chain of islands in the South China Sea. (The post has been slightly modified to recognize the speculative nature of the overall resource available.) Figure 1. Figure 2. Figure 3. In 1988, the Chinese and Vietnamese navies exchanged shots at Johnson reef (video here) with Vietnam losing three ships.

Brilliant SUNplace table beams solar energy on a cast iron cooking surface | Inhabitat - Green Design, Innovation, Architecture, Green Building The Sunplace is a concept piece created by an Italian and Singaporan brings together the couple’s diverse perspectives to create a practical and inspiring BBQ tool for social gatherings. Solar-powered cooking devices are typically pretty simple; there aren’t a lot of steps needed to convert sunbeams into cook-worthy energy, just a little concentration. In the Sunplace, an adjustable fresnel lens heats the cast iron cooking surface, concentrating the sun’s energy and directing it where it needs to go. Related: SunOven provides solar kitchens for developing countries The Sunplace table is a new-fangled green gadget, but that’s not its only purpose. + Lanzavecchia & Wai Via Fast Company Images via Angelo Becci for Lanzavecchia & Wai

Gardening for Life - Discovering New Ways To Feed The World Flying the F-35 is ‘Magic,’ Pilots Say FARNBOROUGH, England — When’s the last time you heard a fighter pilot shrug, look down and say, “Eh, my airplane sucks.” Or as one might say here, “Blimey, me jet is roobish!” So all other things being equal, it wasn’t surprising that three experienced aviators convened by defense behemoth Lockheed Martin raved about its F-35 Lightning II, but their descriptions about operating it were nonetheless interesting. In the small world of fast-jet drivers, the number of F-35 pilots is minuscule. Lockheed’s chief test pilot, Alan Norman, said he was amazed how “easy” it was to learn to fly and master the F-35. Wilson described how much work it took monitoring the Harrier’s controls, controlling its power, and generally trying to put the airplane where he wanted as he hovered and landed. Wilson was asked about the ungainly appearance of the B in its short takeoff and vertical landing mode, when the jet sprouts all manner of crazy hatches and ports and even a big air brake aft of the cockpit.

GoSun Grill: A Breakthrough Solar Oven that Cooks at Night by Patrick Sherwin Risks and challenges Timeline: We refuse to compromise on the quality of our products. During the manufacturing process of the GoSun Sport in early 2014, we established an extensive quality assurance plan, which caught some mistakes, and in turn, delayed the fulfillment of our product for months. We’ve learned to be extremely accurate and completely transparent with our backers regarding the latest developments. Shipping: The GoGun Grill is going to need additional package design and engineering to ensure safe transport to your home. This is entirely GoSun's concern since you’re covered with a Two-Year No Questions Asked Warranty on the evacuated tube. Battery Costs: We have not fully defined our costs on the Thermal Battery encapsulation vessel and production costs. Social Media Sharing: As a small start-up business, we depend heavily on the word-of-mouth and enthusiasm of our customers. Learn about accountability on Kickstarter

Grow The Easiest Garden on Earth Unreported Heritage News: Scribbled by a community of nuns – Ancient Coptic graffiti adorns walls of 3,200 year-old Egyptian temple Who says nuns don’t have any fun? A new research project led by Professor Jennifer Westerfeld, of the University of Louisville, is taking a look at a unique set of graffiti scribbled onto the walls of a 3,200 year old Egyptian temple. The temple was built at Abydos by Seti I, a powerful pharaoh who pushed the borders of the Egyptian empire as far as modern day Syria. It contains two courtyards, two hypostyle halls, chapels and an enigmatic structure known as the “Osireion,” which may commemorate the Egyptian story of creation. Today this complex is covered in a large amount of graffiti dating from ancient times up until the medieval period. Westerfeld believes that a community of nuns contributed to this defacement, writing on its walls around 1,500 years ago. Coptic is the Egyptian branch of Christianity and became widely practiced after the religious reforms of the Roman emperor Constantine in the early 4th century AD. Westerfeld said that a find like this, if validated, is unprecedented.