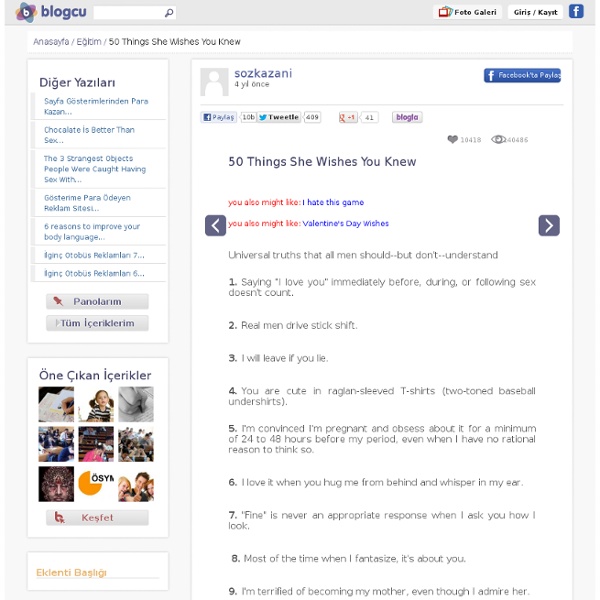 Fairy Tales Can Come True Here's a "photo story" based on the book, Fairy Tales Can Come True (Just Not Every Day!), published by Shake It! Books. The Neuroscience of Romanticized Love – Part 1: Emotion Taboos True love is an act of will that often transcends ephemeral feelings of love…it is correct to say, ‘Love is as love does.’” ~ SCOTT PECK Romanticized ideals for love, and romantic love that leads to long term healthy companionship love with all the trimmings, produce two dramatically different outcomes. Many of the futile attempts of partners to get the love they want in their couple relationships today have to do with “romanticized love” ideals, infused into Western society during the Middle Ages. These ideals, in effect, impose unfair expectations on men and women alike, with regard to what it means to be a “successful” man or woman.

The 21 Day Challenge Everyone Should Take I'm on day 14 of a 21-day challenge that I semi-invented and so far I have to admit the results have been nothing short of amazing. Now, when I say that I semi-invented it, that is purely because I took the idea from the excellent book 'Psycho Cybernetics' and put it in a format that everyone can follow, myself included. I'm not exaggerating when I say this challenge can literally help with any aspect of your life that you would like to improve.

8 Honest (and Somewhat Harsh) Criticisms from a Dude who Gives Dating Advice 1. If you’re asking about this “one girl,” you already lost her Very often dating instructors are mistaken for warlocks. There’s not a single dating instructor who can tell you how to salvage the situation with “that one girl” you can’t stop thinking about. It’s exactly like being 100 pounds overweight and asking a personal trainer, “What should I eat for lunch today that will get me sixpack abs by this evening?” 5 Sure-Fire Ways to Keep From Ruining Your Perfectly Healthy Relationship A study published in the Journal of Abnormal Psychology says excessive worrying can be a detriment to a perfectly happy communion. (Great, now I can add that to my list!) It makes sense to me that focusing on the negative can turn a plum of a relationship into a sour apple, but what else should we NOT being doing if we want to keep things healthy? 1. Stop Communicating

7 Ways For The Introvert To Communicate Confidently Even If You Don’t Feel Confident — Introvert Zone First impressions count. Like it or not, people will make some sort of judgement about you based on their first impression within the first few seconds of meeting you. You’ve heard it said that ‘you never get a second chance to make a first impression.’ So when you are meeting people for the first time, think of what first impression you want to give them. 70 Cutie Baby Animals Bring You a Good Mood Cuteness is usually characterized by some combination of infant-like physical traits, especially small body size with a disproportionately large head, large eyes, and round and softer body features. Infantile personality traits, such as playfulness, fragility, helplessness, curiosity, innocence, affectionate behavior, and a need to be nurtured are also generally considered cute. To those who are living in the concrete jungle, we have collected the following cute animals, hoping they could bring you a good mood and maybe, remind you of the wild world.

Truths That Men Have About Women As promised, like I mentioning in my earlier post on what truths women have about men, this post will be about the truths men have about women. Such as: I look at and am attracted to other women.