Heat Your Room with 1 Candle plus Flowerpots, Nuts and Washers 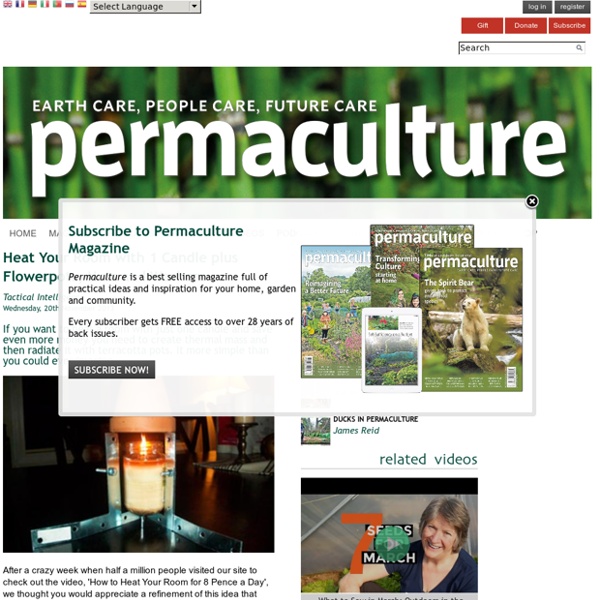 After a crazy week when half a million people visited our site to check out the video, 'How to Heat Your Room for 8 Pence a Day', we thought you would appreciate a refinement of this idea that generates even more heat from a candle by increasing the thermal mass within the first pot. Please share this page too so that those who saw the first post can also test out this new design. Putting it all Together The process for putting together the candle heater is very simple: What You Need Some stainless steel nuts, washers and a bolt plus three flowerpots! One 4? Assembly Instructions I think that the easiest way for you to learn how to put one of these heaters together is to follow the cutout image (to the left) I used from the heatstick.com site: Making the stand I found the simplest stand to make is to purchase three 4? Then just put the three braces together with the middle brace facing the opposite direction and bend the outside two just enough to support the heater. How it Works

Colossal Magnetic Levitation Wind Turbine Proposed It's a vision of a magnetically levitated wind turbine that can generate one gigawatt of power (enough to power 750,000 homes). This is the device proposed by a new Arizona-based company, MagLev Wind Turbine Technologies. The company claims that it can deliver clean power for less than one cent per kilowatt hour using this wind turbine. Magnetic levitation is a very efficient method of capturing wind energy. The company also points out that building a single huge turbine like this reduces construction and maintenance costs, and it requires less land space than hundreds of conventional turbines. There has been speculation that turbines like these would use "full-permanent" magnets, meaning there are no electromagnets, only cleverly placed permanent ones (probably Halbach arrays). China already has Maglev wind turbines in operation, see: The World's First "Magnetic Levitation" Wind Turbines Unveiled in China. Web site: MagLev Wind Turbine Technologies :: Via Business Wire

6 Cents Per kWh: World's Largest Solar Project Unveiled Stirling Energy and Southern California Edison have announced they plan to construct a 4,500-acre solar generating station in Southern California. When completed, the proposed power station would be the world's largest solar facility, capable of producing more electricity than all other U.S. solar projects combined. They promise a cost of electricity of 0.06$/kWh. The dish collectors are unique because they make no use of photovoltaics, instead they use mirrors to focus the sun's rays on a Stirling engine. This heats hydrogen gas inside the engine which expands. The 20-year power purchase agreement signed today, which is subject to California Public Utilities Commission approval, calls for development of a 500-MW solar project 70 miles northeast of Los Angeles using innovative Stirling dish technology. "We are especially pleased about the financial benefits of this agreement for our customers and the state," said Alan Fohrer, SCE chief executive officer. :: Renewable Energy Access

Solar goes Hyper in the U.S. As the U.S. government continues to heap billions in subsidies to the world's wealthiest coal and oil companies, the solar industry has been struggling to make it in the United States. This is sad for many reasons, not the least of which is that we're missing out on one of the biggest growth industries in the world. Currently there are 16 gigawatts of installed solar power globally. That number will grow to about 1,800 gigawatts in the next 20 years, making it one of the best job creators. Fortunately HyperSolar, a new U.S. company, offers a ray of sunny hope on the clean energy frontier. The company does not manufacture solar panels. I saw an early prototype for such a magnifying optical layer a few years back, but the company was "dark" at the time, so I couldn't write about the innovation. Theoretically that means cutting the installation cost of a solar array in half. Innovations like this make several recent reports ring true.

Recycled Building Material Stronger than Concrete A new building material has the potential to divert large quantities of waste from landfills. UK company Affresol offers a truly novel building material called Thermo Poly Rock (TPR), which is made from select waste products. The resulting material is stronger than concrete, is waterproof, fire retardant, and can be used to build low-cost modular housing. "Every country in the world has issues with waste and we now have an opportunity to turn waste into an enduring housing resource that is 100% recyclable." - Ian McPherson, Affresol TPR is cold-produced from waste products mixed with resin and polymers which can then be poured into molds like concrete.. The TPR panels can be used to frame houses, saving large amounts of lumber in the building process, and because the material is waterproof, houses can be put up year-round.

A Table That Turns Your Kitchen Into Mini Ecosystem [UPDATED] Convenience and efficiency are king when it comes to product design. What could be more efficient than a natural ecosystem? That's the insight behind a "living kitchen" designed by the brilliant young design studio Studio Gorm. They looked at what we have in our kitchens--fruits, vegetables, organic waste--and figured: That's actually enough to create a miniature system for watering fresh herbs, composting the waste, and generating new soil. None of the elements is brand new to this product, but their integration wins points for ergonomics and ease. Above the sink, there's a rack for drip-drying your dishes. Maybe what's most surprising is that Studio Gorm isn't based in the Netherlands or Scandinavia--but rather in Eugene, Oregon. Check out some of Studio Gorm's other designs, including a modular furniture system of pegs and boards; an elegant Egyptian-inspired chair; a handsome adjustable lamp; and an overhead light inspired by--of all things--a falafel container.

The world can be powered by alternative energy, using today's technology, in 20-40 years, says Stanford researcher Mark Z. Jacobson | Stanford News Release January 26, 2011 A new study – co-authored by Stanford researcher Mark Z. Jacobson and UC-Davis researcher Mark A. Delucchi – analyzing what is needed to convert the world's energy supplies to clean and sustainable sources says that it can be done with today's technology at costs roughly comparable to conventional energy. But converting will be a massive undertaking on the scale of the moon landings. What is needed most is the societal and political will to make it happen. By Louis Bergeron If someone told you there was a way you could save 2.5 million to 3 million lives a year and simultaneously halt global warming, reduce air and water pollution and develop secure, reliable energy sources – nearly all with existing technology and at costs comparable with what we spend on energy today – why wouldn't you do it? According to a new study coauthored by Stanford researcher Mark Z. The world they envision would run largely on electricity. Jacobson said that the variability can be overcome.