Worldmapper World Population Atlas: The countries of the world as you've never seen them before 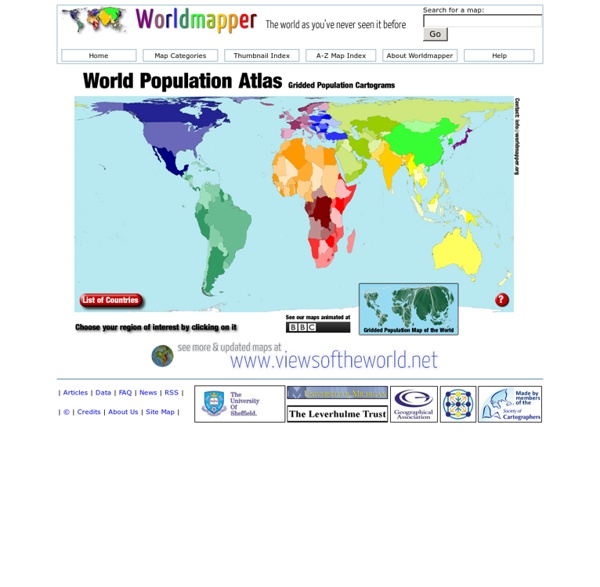 World Population Clock This page will only work with a graphical browser implementing Javascript 3.0 or higher. It fairly accurately clocks the current population and reflects its growth using a second-order approximation of the exponential; in addition, if you enter a date in any form Javascript will accept and hit the "Do this time" button, it will use its magic formula to estimate the population for any date from 1900 to 2100, although the estimates become unreliable outside the range 1950 to 2050. Use the "Un/Freeze" button to "freeze" the clock at a certain time while it is ticking, or to resume it ticking with the present population after you have frozen it or asked for an estimate. Those familiar with the earlier version will note that the range in which the new version gives reasonable estimates has increased considerably. The raw data is from the U.S. Enjoy! Return to Galen Huntington's home page.

World Population Clock: 7.4 Billion People (2016) World Population: Past, Present, and Future (move and expand the bar at the bottom of the chart to navigate through time) The chart above illustrates how world population has changed throughout history. View the full tabulated data. At the dawn of agriculture, about 8000 B.C., the population of the world was approximately 5 million. A tremendous change occurred with the industrial revolution: whereas it had taken all of human history until around 1800 for world population to reach one billion, the second billion was achieved in only 130 years (1930), the third billion in 30 years (1960), the fourth billion in 15 years (1974), and the fifth billion in only 13 years (1987). During the 20th century alone, the population in the world has grown from 1.65 billion to 6 billion. Wonder how big was the world's population when you were born? Growth Rate Yearly Growth Rate (%) Annual growth rate reached its peak in the late 1960s, when it was at around 2%. World Population (2019 and historical) Jews