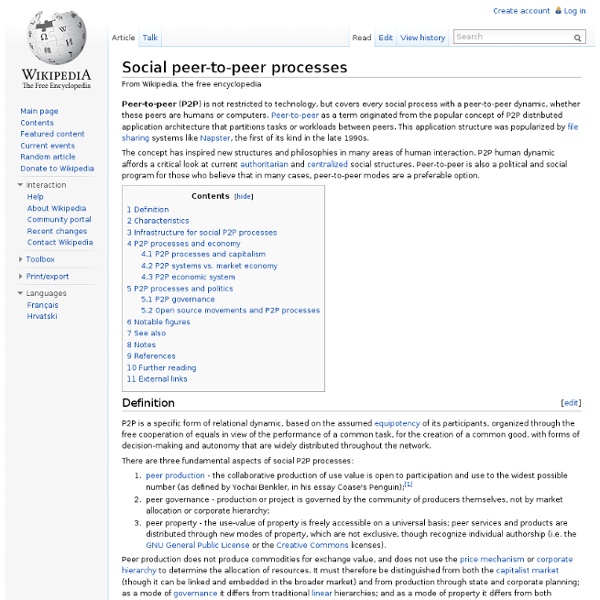 Peer-to-peer learning This article or section is a stub. A stub is an entry that did not yet receive substantial attention from editors, and as such does not yet contain enough information to be considered a real article. In other words, it is a short or insufficient piece of information and requires additions. There are several variants, e.g. (some forms of) collaborative writing Peer tutoring learning by teaching (reciprocal teaching) See also: 1 Peer tutoring and collaborative writing "Peer-tutoring" writing consists in assisting the revision process through the intervention of a peer, following the peer-tutoring assumption: Peer-tutoring is expected to enrich the production through the confrontation with other learners, and by fostering processes like metacognitive awareness on their own productions, particularly epistemic monitoring and reflexive thinking. Peer tutoring is a process developed by Fantuzzo and his colleagues (Wolfe, Fantuzzo and Wolfe, 1986). 2 Mazur Peer Instruction Model 3 Links 4 References

Allura is an open platform for open processes — Allura documentation Rather than build yet another forge, we decided to do something new. We wanted to build a new kind of extensible forge, and a new set of highly integrated forge tools. It’s easy to get frustrated with existing development tools. Too often they are overbearing, complex, and make assumptions that get in your way. And even if they are open source, it’s often difficult to get them to work the way you need them too. Which is why we created Allura. It’s open in bunch of ways: It’s a combination of tools available under Free or Open Source licenses.It’s designed around a plugin architecture, and anybody willing to contribute a tool can play.It’s being hosted publicly, and is built through contributions of individuals and companies who want to promote Open Source development.It’s designed to provide a structure around which welcoming (open) communities can grow.Its core tools are designed around inclusive development processes.

P2P And Education: Robin Good Interviews Peer-To-Peer Evangelist Michel Bauwens P2P and Education: Robin Good Interviews Michel Bauwens 1) Comparison Between The History of Ancient Rome and a P2P Society I often compare the change from capital society to a peer to peer society as something very similar to the change from the slave-based society of Rome to the feudal society in the Christian west. When a slave-based empire cannot grow in space, what happens is that slaves become expensive, and then usually it's replaced by another empire. So the serfes, the peasants, the farmers would produce for their own, and would give the surplus to the local dominant lords. And what I'm arguing is that the change from capitalism to peer to peer is very similar: so what we have is a change from production of exchange value, not making commodities for sale. To communities, people using communities producing for use values directly, you know people who share on YouTube they don't make a video for sale, they make it to show, you know it's directly useful for other people.

Magazine / Columns : Open processes Magazine Open processes BILL KIRKMAN Two recent elections have been very different in their significance and their impact. With all due respect to the Liberal Democrat Party in the United Kingdom, the election of its new leader, Nick Clegg, on December 18, was not the sort of news that required editors around the world to hold the front page. The Lib Dems are the third party in the British political firmament. Realistically, the nearest they are likely to come to power in the foreseeable future is as holders of the balance in a “hung” parliament. Turn now to another election on the following day — that of Jacob Zuma as leader of the African National Congress in South Africa. Crucial outcome Clearly, South Africa has a crucial position in the African continent, and the leadership of the country has wide-ranging implications. The differences between the two leadership elections were obvious, but it is worth looking at something which made them similar. Courtesy still an asset Magazine

Open the processes and the "books" Why is discussing salary so taboo? The systems are frequently indefensible. Although we have a desire for salary administration to be a meritocracy, base salaries are not performance based reflecting instead a number of factors including market conditions at time of hire, longevity, ability to negotiate and cost of living increases. Systems grow and are “patched” over time, what may have once made sense no longer does. Salaries and money are emotionally charged. Why is openness about money so difficult? In Your Brain at Work, David Rock describes how the human brain is attuned to status at a primal level: "A perceived threat to status feels as if it could come with terrible consequences. In most corporate environments, the strongest symbols of status often involve money -- who earns the most, and who controls the most. That's why opening the books needs to go hand in hand with a culture that supports open information, empowerment and common fate.

A semantic framework for open processes We propose a general methodology for analysing the behaviour of open systems modelled as coordinators, i.e., open terms of suitable process calculi. A coordinator is understood as a process with holes or placeholders where other coordinators and components (i.e., closed terms) can be plugged in, thus influencing its behaviour. The operational semantics of coordinators is given by means of a symbolic transition system, where states are coordinators and transitions are labeled by spatial/modal formulae expressing the potential interaction that plugged components may enable. Behavioural equivalences for coordinators, like strong and weak bisimilarities, can be straightforwardly defined over such a transition system.

Processes | Open Health Informatics The final piece of the Open Health Informatics jigsaw is the use of open development processes. Open source software is most usually constructed using an agile software development process, with continuous builds, automated testing and open issue logs. There is nowhere to hide in such a development process – what you see is, quite literally, what you get and if you want something different you can either contribute through the existing development community, or do it yourself. But open development processes, as embodied by agile methodologies such as Scrum, can deliver more than just software products. So how can agile methodologies deliver openness in the process of systems development and solution delivery? IT project managers often make reference to the Project Triangle — combining the three variables of resources (equating to timescale and cost), scope and quality.

trolltech, phonon and open processes There's been a scatter-shot of updates on planet.kde.org and Google+ (and I assume elsewhere in places Id don't follow so closely) about Plasma Desktop's KRunner, Milou and Sprinter and, given the feedback and comments that I keep seeing, I fear that it is generally leaving people more confused than enlightened. Let's see if we can sort it all out together here. What people want Let's start by talking about the use cases these tools are intended to address, as that will help us understand why the tools exist and why they are designed the way they are. Essentially, people want to find and then open things. Find: The traditional way of finding something on a computer is to start with a user interface that lists a set of entry points and then navigate through them like a maze. Open: An application gets launched. So the point of all these tools is to find and open things. KRunner: A tale of two cities KRunner is the launch dialog in Plasma Desktop. Milou: Quick access to indexed files Fine!

Tom Fuentes: professional schmoozer, circumventer of open processes, and THUG I’ve been thinking about the mystery of Tom Fuentes’ occupation. Just what does this man do for a living? In documents, he states that he is a consultant. But what does that mean? Near as I can tell, Fuentes has had a series of jobs that include stuff that has routinely invited suspicions of dire corruptophilic hinkyhood. Fuentes performed mostly personnel work for the firm and sometimes lobbied public agencies for contracts. Evidently, at some point in the last ten years, Fuentes ceased his VP gig with T&A, but he still “consults” for them. Because I’m in a peevish mood, I shall close with this curious passage from Filkins’ 1996 article: In his drive to reduce the Democrats to political irrelevance, Fuentes has often taken on the role of GOP kingmaker. Yeah. SEE Guiding with an Iron Hand (LA Times, 1996) P.S.: I found an old LA Times article that might explain the mystery of Fuentes' odd departure from Robert Bein, William Frost & Associates: O.C.

Social BPM 8inShare By brian | January 24, 2012 | Social Applications Of course, this is a tongue-in-cheek question. Nonetheless, there is a lot of pressure on the BPM industry right now to jump on the “Social” bandwagon and this begs the question of whether or not this is a good idea? What is really at the root of the “social” juggernaut? It seems clear to me that the root of the change is the Generation Y, and the way this generation has changed technology and expectations around the usage of technology. The long tail was really the first manifestation of the coming age of “social”. The wiki and the self-publishing explosion were part of the same trend. The mobile app represented the leap of this phenomenon from the desktop and onto the mobile device, i.e. the merger of long tail and the mobile phone. “Social” is the ultimate combination of all of the above. So what is Social BPM? Keith Swenson says that Social BPM really needs to be a Quantum Leap. Ok, I exaggerate.

Social BPM: Gateway to Enhanced Process Efficiency  | Virtusa With the world getting more ‘social’, individuals are transforming the way they go about their daily lives. Businesses have recognized the need to rethink their strategies and reevaluate their operating models and have commenced to align them with customer expectations and customers’ perception of value. From focusing only on optimization of supply chains, penetration of new markets and scaled bottom lines, companies are now opening their eyes to the new world – a world which is moving towards a greater impetus on having a more social identity. Today, people across the globe rely on social networks for finding lost friends, making new ones, buying new furniture and selling antiques — interacting with technology for almost every activity in their everyday life. You no longer get a wedding invite delivered by post to your doorstep; you get an event invite via Facebook delivered to your inbox!