School choice gutted Detroit’s public schools. The rest of the country is next. – VICE News 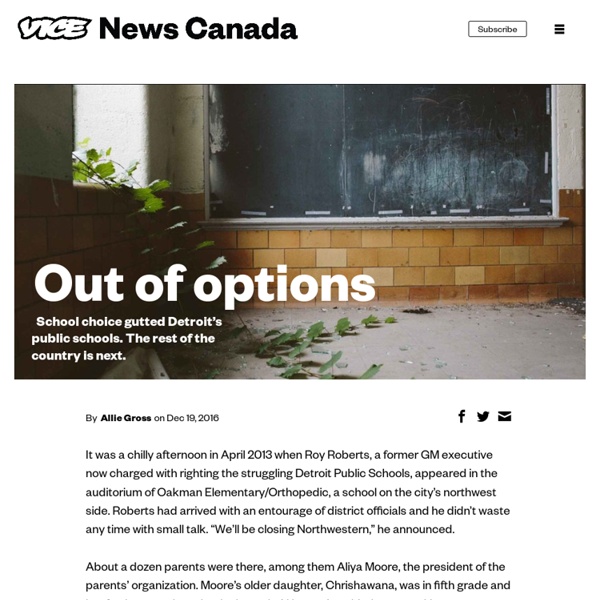 It was a chilly afternoon in April 2013 when Roy Roberts, a former GM executive now charged with righting the struggling Detroit Public Schools, appeared in the auditorium of Oakman Elementary/Orthopedic, a school on the city’s northwest side. Roberts had arrived with an entourage of district officials and he didn’t waste any time with small talk. “We’ll be closing Northwestern,” he announced. About a dozen parents were there, among them Aliya Moore, the president of the parents’ organization. Moore’s older daughter, Chrishawana, was in fifth grade and her final year at the school, where she’d been since kindergarten. Her youngest, Tylyia, just a toddler at the time, had become a fixture on the campus, often seen coloring in the back of one of the kindergarten classrooms. Now she and the other parents looked at Roberts, perplexed. READ MORE: Amina, a Somali refugee, was about to reunite with her son, Mohamed, after nearly two years apart. “Oakman!

Michigan cyber schools fight Snyder’s proposed aid cut Lansing — Opposition is building to Gov. Rick Snyder’s plan to cut funding for Michigan charter cyber schools — five years after championing their expansion — and pump the extra money into brick-and-mortar high schools. It comes as standardized test scores show students at Michigan cyber schools, many operated by for-profit management companies, are consistently underperforming their peers. Snyder argues the cyber schools should be able to offer a high-quality education at more affordable prices because they spend next to nothing on buildings and buses that can be costly for traditional schools. But officials who run the schools argue the 20 percent funding cut proposed by the Republican governor would exacerbate the unique challenges they face.

Detroit Public Schools 'neglecting' its students at $14K per pupil [Michigan Capitol Confidential] Detroit Free Press Columnist Rochelle Riley laments “Oh, if only the children of Detroit were pieces of art” in a column in which she claims no leaders want to talk about education in Detroit. The column implies that as the city goes through bankruptcy, the school system is not getting the proper amount of attention. For the Record says: The state of Michigan is devoting about $440 more per-pupil in state funds to Detroit Public Schools in 2013-14 compared to five years ago. In 2013-14, the state poured $378.5 million into DPS, or about $7,802 per student. In 2008-09, that figure was $7,445 per student.

Instability causes staff at a Detroit charter school to re-apply for their jobs for second year in a row Detroit-based charter management companies InspirED Education and New Urban Learning signed a settlement agreement with the Michigan Alliance of Charter Teachers and Staff and the American Federation of Teachers at the end of last month, impelling the management companies to bargain with the staff at University YES Academy (UYA), a charter school on Detroit's northwest side. But any celebration amongst staff over the promised bargaining is short-lived. The school board has decided to hire a new management company for next year, a move that not only invalidates any bargaining between staff and the companies, but also means all teachers will be terminated and must re-apply for their jobs.

Charter Networks, Education Non-Profits Steer Clear of Detroit - The Atlantic With some of the nation’s most devastated schools, Detroit is in desperate need of new ideas, new energy, and lots of money. But when local advocates approach organizations that have invested millions of dollars—and countless hours of problem-solving—into jumpstarting schools in cities like Washington, Memphis, Indianapolis, and New Orleans, the answer often comes back the same: No.

Feds: 12 Detroit principals stole $1M in kickback scheme Four weeks into the school year, DPS is facing a shortage of teachers. Some classes are overcrowded as a result. Ann Zaniewski Detroit Free Press Detroit Schools: Inside an Experiment to Save the District When Detroit students return to school on Sept. 6, the rodents and mold found in classrooms last year will be all but gone. Cracked windows will be repaired. Collapsed ceilings patched up. Chipped paint removed. Last year, not a single Detroit public school complied with the city's public health and safety codes, one reason teachers protested with widespread sick-outs that temporarily crippled the system. This year, 92% of schools are in full compliance.

Detroit teachers urged to return following pay guarantee Detroit Federation of Teachers interim President Ivy Bailey received a letter with the promise from the state-appointed emergency manager for the district, retired Judge Steven Rhodes. The union encouraged employees to go back to school Wednesday after a membership meeting Tuesday afternoon. All but three of Detroit's 97 schools were closed again Tuesday, the second day of teacher protests over concerns educators would go unpaid by the city's financially ailing school district. Rhodes, in a statement issued by Detroit Public Schools, said teachers are entitled to be paid in full, regardless of their pay schedule. Snyder urges high school funding boost in $56.3B budget Lansing — Michigan Gov. Rick Snyder is calling for additional spending to support high school classrooms and “at risk” students as part of a $56.3 billion budget plan celebrated by some public education officials but criticized by charter school advocates. The governor presented his 2018 spending plan to legislators Wednesday, pitching a series of new initiatives while continuing to resist the personal income tax cut proposals his fellow Republicans in the state Legislature are clamoring for. Snyder’s executive budget recommends an extra $50 in per-pupil funding for Michigan high schools. The targeted $20 million would be a new approach for Michigan, which has not traditionally based funding on grade-specific needs.