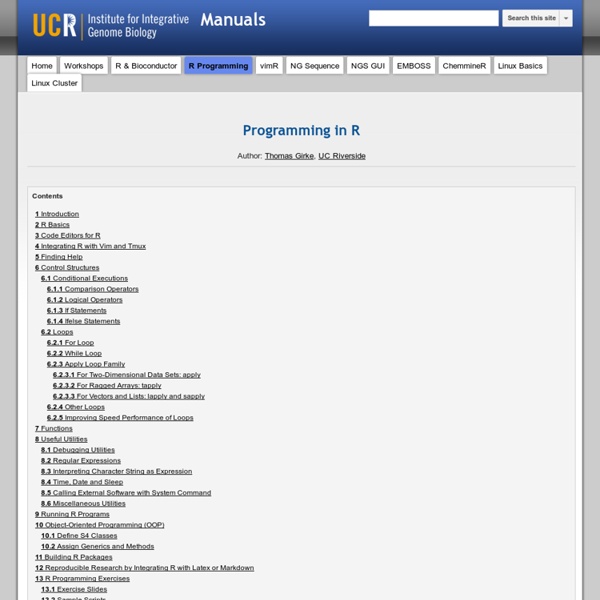 Rtips. Revival 2014! Paul E. Johnson <pauljohn @ ku.edu> The original Rtips started in 1999. It became difficult to update because of limitations in the software with which it was created. Now I know more about R, and have decided to wade in again. In January, 2012, I took the FaqManager HTML output and converted it to LaTeX with the excellent open source program pandoc, and from there I’ve been editing and updating it in LyX. You are reading the New Thing! The first chore is to cut out the old useless stuff that was no good to start with, correct mistakes in translation (the quotation mark translations are particularly dangerous, but also there is trouble with ~, $, and -. (I thought it was cute to call this “StatsRus” but the Toystore’s lawyer called and, well, you know…) If you need a tip sheet for R, here it is. This is not a substitute for R documentation, just a list of things I had trouble remembering when switching from SAS to R. Heed the words of Brian D. 1.1 Bring raw numbers into R (05/22/2012) Step 1.

Plot maps like a boss A new package OpenStreetMap has been released to CRAN this week which is designed to allow you to easily add satellite imagery, or open street maps to your plots. Raster maps are a great way to add context to your spatial data with a minimum outlay of effort. The syntax in OpenStreetMap is fairly simple, just give it a bounding box in lat/long and it will download a high quality raster image ready for plotting library(OpenStreetMap) library(rgdal) map <- openmap(c(70,-179), c(-70,179)) plot(map) (click for higher quality image) The above code downloads multiple map tiles and stitches together, with the level of zoom determined automatically. We can also access satellite imagery though Bing. map <- openmap(c(70,-179), c(-70,179),type='bing') plot(map) Now, that is all fine and dandy, but kind of useless unless you are able to combine it with your own data. In terms of combining maps with your data there are two options. We may also want to go the other way and transform the image.

R tells you where weapons go As an ameturer programmer (one without proper trainings in any mainstream programming language — C and Java) , the more I use R the more I understand the saying — “You are only bounded by your imagination”. The other day I suddenly recalled that someone did a very impressive Facebook map. I then thought it would be nice if I can put these “flows” on the map (or of the same sort) created in my first post. So, I googled around and found this brilliant blog that teaches you how to make flows (Great circles) step by step. Again, thanks to R, its great community and its openness, I created the following map of international weapon export in 2010 (from top 7 exporters). R-bloggers.com offers daily e-mail updates about R news and tutorials on topics such as: visualization (ggplot2, Boxplots, maps, animation), programming (RStudio, Sweave, LaTeX, SQL, Eclipse, git, hadoop, Web Scraping) statistics (regression, PCA, time series, trading) and more...

Mapping the World’s Biggest Airlines The map above shows the routes flown by the top 7 airlines (by international passenger distance flown). The base map shows large urban areas and I have attempted to make it look a bit like the beautiful “Earth at Night” composite image produced by NASA. You can clearly see a relationship between where people live and where the big carriers fly to across Europe and the US but India and much of China have relatively few routes. I expect much of the slack is picked up by smaller airlines in these countries but they must represent key growth areas the world economy becomes increasingly driven by the east. This map isn’t meant to be comprehensive- I just wanted to make another example of a visualisation with ggplot2. How I did it Plotting great circles has become an increasingly popular thing to do with R (because they look cool) and the excellent flight path data freely available from the OpenFlights website provides a neat data source to play around with. Get a world map worldmap

Coming of Age: R and Spatial Data Visualisation I have been using R (a free statistics and graphics software package) now for the past four years or so and I have seen it become an increasingly powerful method of both analysing and visualising spatial data. Crucially, more and more people are writing accessible tutorials (see here) for beginners and intermediate users and the development of packages such as ggplot2 have made it simpler than ever to produce fantastic graphics. You don’t get the interactivity you would with conventional GIS software such as ArcGIS when you produce the visualisation but you are much more flexible in terms of the combinations of plot types and the ease with which they can be combined. It is, for example, time consuming to produce multivariate symbols (such as those varying in size and colour) in ArcGIS but with R it is as simple* as one line of code. I have, for example, been able to add subtle transitions in the lines of the migration map above.