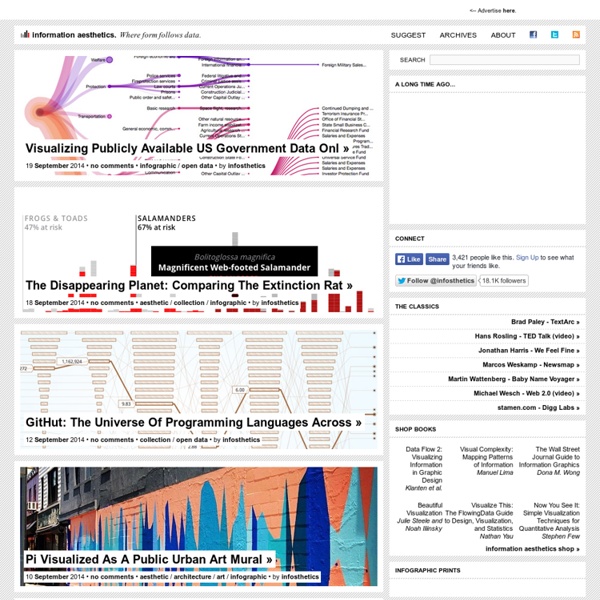 15 Stunning Examples of Data Visualization Data Visualization is a method of presenting information in a graphical form. Good data visualization should appear as if it is a work of art. This intrigues the viewer and draws them in so that they can further investigate the data and info that the graphic represents. In this post there are 15 stunning examples of Data Visualization that are true works of art. David McCandless » Books Information Is Beautiful Published Feb 2010 by HarperCollins UK Visually stunning displays of information that blend the facts with their connections, their context and their relationships – making information meaningful, entertaining and beautiful. This is information like you have never seen it before – keeping text to a minimum and using unique visuals to offer a blueprint of modern life. Easy to flick through but intriguing and engaging enough to study for hours.

20 Great Infographics of 2012 2012 has certainly been an eventful year, with everything from elections, to olympics, to scientific breakthroughs, to major weather events. To help review some of the things that happened, here are 20 of the best static infographics from the year. 1. There were several space related events this year. NASA’s Curiosity rover landed on mars, and successfully began collecting data. 7 Exciting Web Development Trends for 2011 At the end of December, you read Andrew's list of the hottest technologies, tools, and resources to come from 2010. Today, we're going to look forward, and take a peek at some exciting emerging technologies and trends. A Word from the Author The tools and technologies that we, as web developers, work with is in a state of constant flux, much like every other industry. What separates us from the rest is that we have to learn, unlearn and relearn new developments at a much faster rate, much more frequently. Today, I'd like to talk about a few technologies and trends that I think are going to be quite important in the coming year: a pseudo prediction/wish list/what we're going to cover this year post of sorts.

DataViz DataViz Mediaeater MMX Archive / RSS June 21 (Source: thedailywhat) Data Viz Gets Physical While many are busy churning out formulaic infographics, it’s great to see others being considerably more creative. Some endeavour to come up with new forms of visualisation, and others focus on gathering new data or experimenting with design. The visualisations featured in this post explore the use of different materials for representing data. I was prompted to write this post by the latest edition of Visualisation Magazine (the handmade volume). I did see a post criticising one of the visualisations I’ve included here for its lack of scientific accuracy, but I think that was missing the point.

Choosing a web development framework Illustration from Wordle.net Web Dev FrameworksWhich one is right for you? So you have decided you want to start your startup, or may be you just want to build a hobby site. Data Visualization: Modern Approaches - Smashing Magazine About The Author Vitaly Friedman loves beautiful content and doesn’t like to give in easily. When he is not writing or speaking at a conference, he’s most probably running … More about Vitaly Friedman … Data presentation can be beautiful, elegant and descriptive. There is a variety of conventional ways to visualize data - tables, histograms, pie charts and bar graphs are being used every day, in every project and on every possible occasion. However, to convey a message to your readers effectively, sometimes you need more than just a simple pie chart of your results.

20 Websites Using Infographics Infographics is a visual representation of information. Designers often use it to explain complex things in a simple way. For many years infographics could be found in magazines, brochures and other printed materials, but now it’s becoming a part of the digital world. Wireframe and mockup tools, best examples It’s usual to see graphic designers having problems while trying to explain their customers the main idea of the project that they want to develop, this happens often because graphic and web designers are getting used to draw everything straight in the computer, without a previous hand drawn sketch. When the creative arrives to the costumer’s office / house and finds out that the person is not familiar with graphic programs such as Photoshop and Illustrator and so there’s is no way to show him the super cool vectorized interface that was supposed to blow out your client’s mind; don’t worry my dear creative people, because now there’s a product that will solve all your graphic presentation needs regardless of having the complete Adobe Suite at your disposal. We are talking about the mockups and wireframes, applications that are designed to work on your main idea without having to worry about resolution, color mode and other similar topics. Icon by Iconshock . 1. Mockingbird

Infographic of the Day: Twitter Tracks the Entire Country's Mood Every tweet, no matter how trivial, reveals the writer's mood, through word choice--It can be as obvious as "happy" or as subtle as "diamond." Now imagine if you could take that knowledge, scale it up to the entire Twitter-verse, and use it to gauge the entire country's mood? That's exactly what Alan Mislove, a computer scientist, at Northeastern University, did, using 300 million tweets in real time. Check it out in action, over time--you can actually see moods rising at the end of the work day, and that same pattern gets repeated across time zones: Though it seems impossibly hard, the methodology was actually quite straightforward. Mislove and his team started with a scale, previously devised by psychologists via polling, which assigns mood scores to 600 English words.

40 Super-Cool Infographics You Absolutely Have To See Infographics can be a great source for learning new facts and getting design inspiration. I even know several web designers who frequently make infographics to practice some skills. In this article we’ll be having a look at a great collection of these that you definitely should see! Here’s something for everyone. Design can be complicated and design can be simple. By making infographics you can practice using your skills, setting up information in a new and creative way along with educating others in a fun way.