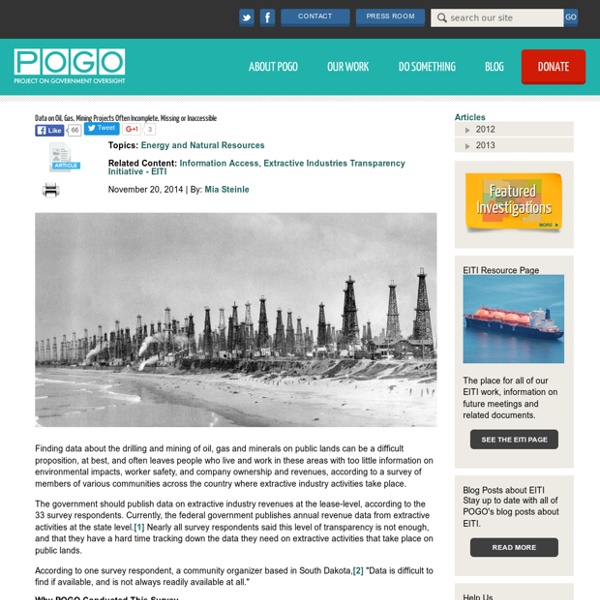 Data on Oil, Gas, Mining Projects Often Incomplete, Missing or Inaccessible Topics: Energy and Natural Resources Related Content: Information Access, Extractive Industries Transparency Initiative - EITI November 20, 2014 | By: Mia Steinle Finding data about the drilling and mining of oil, gas and minerals on public lands can be a difficult proposition, at best, and often leaves people who live and work in these areas with too little information on environmental impacts, worker safety, and company ownership and revenues, according to a survey of members of various communities across the country where extractive industry activities take place. The government should publish data on extractive industry revenues at the lease-level, according to the 33 survey respondents. According to one survey respondent, a community organizer based in South Dakota,[2] "Data is difficult to find if available, and is not always readily available at all." Why POGO Conducted This Survey Going Beyond Revenue Data 1.

Arkansas Oil Spill Sheds Light On Aging Pipeline System Oil covers the ground around a slide in Mayflower, Ark., on April 1, days after a pipeline ruptured and spewed oil over lawns and roadways. Jeannie Nuss/AP hide caption toggle caption Jeannie Nuss/AP Equipment failed to detect North Dakota oil leak BISMARCK, N.D. — Electronic monitoring equipment failed to detect a pipeline rupture that spewed more than 176,000 gallons of crude oil into a North Dakota creek, the pipeline's operator said Monday. It's not yet clear why the monitoring equipment didn't detect the leak, Wendy Owen, a spokeswoman for Casper, Wyoming-based True Cos., which operates the Belle Fourche Pipeline, said. A landowner discovered the spill near Belfield on Dec. 5, according to Bill Suess, an environmental scientist with the North Dakota Health Department.

Pipeline problems Already, more than 800,000 kilometres of major petroleum pipelines criss-crosses the North American continent, and more is under development. Eventually, those pipelines will outlive their purpose. Sometimes they are abandoned. Feds Order Correction to Plan to North Dakota Pipeline Owner The Latest on Oil pipeline rules(all times local): 2 p.m. Federal regulators have outlined corrective steps that must take place before a company may restart a pipeline that leaked 176,000 gallons of oil into and along a creek in western North Dakota.

Extractive Industries Transparency Initiative 12.18.15 The United States this week published its first EITI Report, covering the fiscal year 2013. “The Report provides new insights into the governance and taxation of the extractive industries in the world largest oil producer”, said EITI Chair Clare Short. “The accompanying data portal has set a standard that many other EITI implementing countries might wish to emulate”. “Providing data in an open and accessible format will empower citizens, inform public discussions, and expand the scope of future revenue reporting to ensure the American people receive a fair return for the extraction of oil, gas, minerals and renewable energy on public lands and waters,” said U.S. Tesoro’s 2013 North Dakota Oil Spill Clean-Up Lingering into New Year The clean-up by Tesoro Corp. of a nearly 21,000-bbl oil pipeline leak in North Dakota in 2013 will continue into next year, a state health department official said Wednesday. "There is still active remediation ongoing at the site,” which is in the heart of the Bakken Shale about 10-12 miles northeast of Tioga, and Tesoro is “still in the process of cleaning it up," said North Dakota Department of Health’s Bill Suess, spill investigation program manager. Suess said the company had projected completing the clean up this spring, but he expects the project to continue into the fall. There will be several years of monitoring the site by the company and the state after everything is excavated, treated and backfilled, Suess said, noting that state officials need to assure there continues to be no impact on underground domestic water supplies. Tesoro has spent nearly $50 million to date for a clean-up effort originally estimated at about $61 million, he said.

PHMSA: Pipeline Operator Information Search Pipeline Operator Information The operator information available below includes operators with hazardous liquid, gas transmission, and/or gas gathering pipelines who have submitted one or more PHMSA-required annual reports for the 2006-2015 time period. Gas distribution assets are not currently included in these reports. A report may be accessed on a particular operator which provides basic mileage, incident, inspection, and enforcement information covering the last five years. Mileage and incident information is provided for all of the hazardous liquid and/or gas transmission and gathering pipelines operated by a particular operator, whether they involve assets which are inspected by PHMSA (referred to as "Federally-inspected") or assets which are inspected by one of PHMSA's partner state agencies (referred to as "State-inspected").

Oil companies in North Dakota dusting off the cobwebs BISMARCK, N.D., Dec. 14 (UPI) -- Energy companies working in North Dakota are shifting from a position of reserve to one of optimism with oil prices in recovery, a state leader said. North Dakota is the No. 2 oil producer in the United States, behind Texas, and host to significant portions of the Bakken and Three Forks shale oil and natural gas basins. Crude oil production from North Dakota peaked in 2014, when oil was trading near the $100 per barrel mark, at 1.2 million barrels per day, but faltered since oil dipped below $30 per barrel early this year. Lynn Helms, the director of the North Dakota Industrial Commission, said in a statement that a price recovery that follows a decision from the Organization of Petroleum Exporting Countries was welcome news for the state. Even with a slump in prices in early Wednesday trading, WTI was priced above $52 per barrel. That's 20 percent, or almost $10 per barrel, higher than one month ago.

Crude Oil Spills and Health - Links to resources about chemicals, side effects, cleanup, and recovery Overviews Return to top Health Information Coping with Disasters and Stress North Dakota recorded 300 oil spills in two years without notifying the public North Dakota, the nation's No2 oil producer behind Texas, recorded nearly 300 oil pipeline spills in less than two years, state documents show. None was reported to the public, officials said. According to records obtained by the Associated Press, the pipeline spills, many of them small, are among some 750 "oil field incidents" that have occurred since January 2012 without public notification. "That's news to us," said Don Morrison, director of the Dakota Resource Council, an environmental-minded landowner group with more than 700 members in North Dakota.

North Dakota Profile North Dakota Quick Facts In 2014, North Dakota was the second largest crude oil-producing state in the nation and accounted for over 12.5% of total U.S. crude oil production; a 251% increase in production from 2010 to 2014 was primarily driven by horizontal drilling and hydraulic fracturing in the Bakken formation. North Dakota had 5.5% of the nation’s recoverable coal reserves at producing mines as of 2013; the state’s coal production, which all came from surface mines, accounted for 2.8% of U.S. coal production in 2013. Although North Dakota’s total energy consumption is among the lowest in the nation as a result of its small population, the state’s consumption per capita ranks among the highest, in part because of the energy-intensive industrial sector and high heating demand in winter.