The Center for Nonviolent Communication 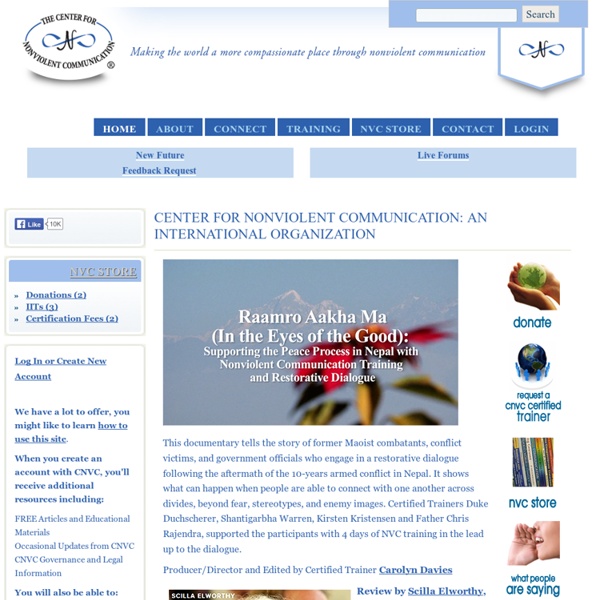 Texas State Historical Association (TSHA) Houston is Texas’s biggest city and the fourth largest city in the country. Founded on the banks of Buffalo Bayou in 1836, Houston is a city focused on progress, and is always keeping an eye towards the future. But it also has a rich and important history, which has affected the state, the nation, and the world. Houston served as the first permanent capital of the Republic of Texas, hosted the state’s first presidential convention, and built Texas’s first freeway and the world’s first air-conditioned sports stadium. In 1969 “Houston” rang out as the first word spoken from the moon, a nod to its legacy as “Space City.”

8 ways to defend against terror nonviolently Cet article est disponible en français. One of my most popular courses at Swarthmore College focused on the challenge of how to defend against terrorism, nonviolently. Events now unfolding in France make our course more relevant than ever. (The syllabus was published in “Peace, Justice, and Security Studies: A Curriculum Guide” in 2009.) In fact, the international post-9/11 “war against terror” has been accompanied by increased actual threats of terror almost everywhere. In the first place, who knew that non-military techniques have, in actual historical cases, reduced the threat of terror?

Conflict Management Skills Gregorio Billikopf Party-Directed Mediation (3rd Edition - January 2014) 446 pages + xvi preface 14 chapters, 3 appendices, index The World Factbook People from nearly every country share information with CIA, and new individuals contact us daily. If you have information you think might interest CIA due to our foreign intelligence collection mission, there are many ways to reach us. If you know of an imminent threat to a location inside the U.S., immediately contact your local law enforcement or FBI Field Office. For threats outside the U.S., contact CIA or go to a U.S. Embassy or Consulate and ask for the information to be passed to a U.S. official.

African Great Lakes Initiative: Helping to create a more peaceful future in Africa AGLI Programs AVP: These are three-day experiential workshops that teach participates non-violent means of resolving conflicts. There are three levels - basic, advanced, and training for facilitators. HROC: (pronounced HE-rock) HROC is a three day experiential workshop modeled on AVP that deals with the personal and community trauma from the violent conflicts in the region. Communication Training Organisations, workplaces, community groups and families have something important in common: The quality of relationships are the key to their success. Through my life experience as a conference interpreter, journalist, mediator and community founder (together with other people), it has become clear to me that how we communicate and how we work together is more important than what we do. My name is Thomas Riedmuller.

Global Peace Index – Vision of Humanity The results this year show that the level of global peacefulness deteriorated, with the average country score falling by 0.34 per cent. This is the ninth deterioration in peacefulness in the last twelve years, with 81 countries improving, and 80 recording deteriorations over the past year. The 2020 GPI reveals a world in which the conflicts and crises that emerged in the past decade have begun to abate, only to be replaced with a new wave of tension and uncertainty as a result of the COVID-19 pandemic. Iceland remains the most peaceful country in the world, a position it has held since 2008. It is joined at the top of the index by New Zealand, Austria, Portugal, and Denmark.

International Center on Nonviolent Conflict Submission Manager - Application FSI 2016 This is the official online application form for the 2016 Fletcher Summer Institute for the Advanced Study of Nonviolent Conflict (FSI). Before applying, please make sure you have fully reviewed the FSI homepage for additional information about the program. Conditions to apply: FSI is an advanced education program that draws participants from around the world with the aim of advancing understanding of the field of civil resistance and strategic nonviolent action. As interest in this field has increased globally over the last decade and word of FSI has spread, entry into FSI has become an increasingly selective and competitive process.