RegexOne - Learn Regular Expressions - Lesson 1: An Introduction, and the ABCs 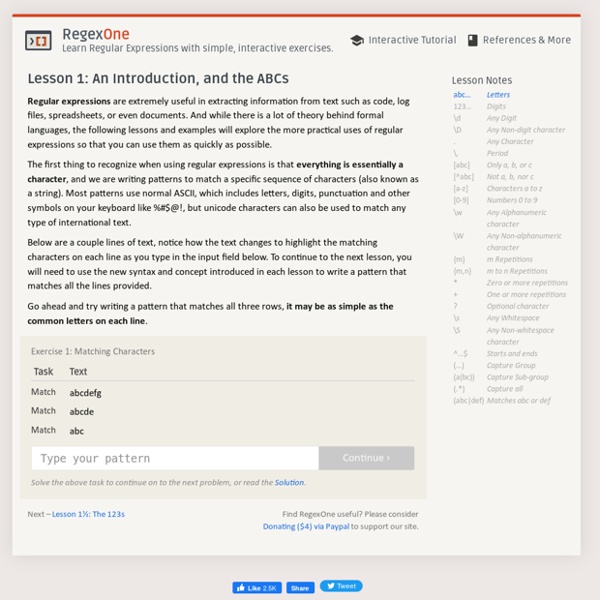 XML Path Language (XPath) Abstract XPath is a language for addressing parts of an XML document, designed to be used by both XSLT and XPointer. Status of this document This document has been reviewed by W3C Members and other interested parties and has been endorsed by the Director as a W3C Recommendation. It is a stable document and may be used as reference material or cited as a normative reference from other documents. The list of known errors in this specification is available at Comments on this specification may be sent to www-xpath-comments@w3.org; archives of the comments are available. The English version of this specification is the only normative version. A list of current W3C Recommendations and other technical documents can be found at This specification is joint work of the XSL Working Group and the XML Linking Working Group and so is part of the W3C Style activity and of the W3C XML activity. Table of contents Appendices 2.2 Axes

Quick Tip: The OOP Principle of Coupling So far in this series, we've discussed object-oriented programming in general, and the OOP principle of cohesion. In this article, we'll look at the principle of coupling and how it helps in game development. Note: Although this tutorial is written using Java, you should be able to use the same techniques and concepts in almost any game development environment. Coupling looks at the relationship between objects and how closely connected they are. A relations diagram A good example of coupling is HTML and CSS. Objects that are independent from one another and do not directly modify the state of other objects are said to be loosely coupled. A loosely coupled system Objects that rely on other objects and can modify the states of other objects are said to be tightly coupled. A tightly coupled system A common phrase you'll hear is "strive for low coupling and high cohesion". First, lets look at the objects of Asteroids and how they are connected.

Data Virtualization Software and Tools | Informatica US Jumpstart a data warehouse via rapid prototyping and incremental delivery. Informatica Data Virtualization provides a single environment for data integration and data federation along with role-based tools that share common metadata. The solution allows analysts to access and merge diverse data directly across systems and to collaborate with IT to create sophisticated business rules that leverage the data profiling, complex transformation, data quality, and data masking capabilities of the Informatica platform. With Informatica Data Virtualization, your company benefits from a single scalable architecture for both data integration and data federation, creating a data virtualization layer that hides and handles the complexity of accessing underlying data sources—all while insulating them from change. As a result, analysts get the data they need and trust while IT retains control of the process.

Learn Python The Hard Way This exercise has no code. It is simply the exercise you complete to get your computer to run Python. You should follow these instructions as exactly as possible. For example, Mac OS X computers already have Python 2, so do not install Python 3 (or any Python). Go to with your browser, get the Notepad++ text editor, and install it. You do not need to be the administrator to do this.Make sure you can get to Notepad++ easily by putting it on your desktop and/or in Quick Launch. From now on, when I say "Terminal" or "shell" I mean PowerShell and that's what you should use. Warning Sometimes you install Python on Windows and it doesn't configure the path correctly. > python ActivePython 2.6.5.12 (ActiveState Software Inc.) based on Python 2.6.5 (r265:79063, Mar 20 2010, 14:22:52) [MSC v.1500 32 bit (Intel)] on win32 Type "help", "copyright", "credits" or "license" for more information. >>> quit()> mkdir mystuff > cd mystuff ... You are done with this exercise.

Learning to Use Regular Expressions Often if you find that your regular expressions are matching too much, a useful procedure is to reformulate the problem in your mind. Rather than thinking about "what am I trying to match later in the expression?" ask yourself "what do I need to avoid matching in the next part?" The trick here is that there are two different ways of formulating almost the same sequence. For people who have thought about basic probability, the same pattern occurs. Report: Data Virtualization Market is Strong Report: Data Virtualization Market is Strong The data virtualization space is teeming, peopled by feature-rich platforms from Cisco, Denodo, IBM, and Informatica as well as a few upstarts. By Stephen SwoyerJune 2, 2015 Think you can name the top 10 vendors in the data virtualization (DV) space? Probably not. If you've been paying close attention, you actually know what data virtualization is. But 10? According to a recent Forrester Wave research report, there are more than two dozen DV players, of which Cisco, Denodo, IBM, and Informatica -- along with Oracle Corp. and SAP AG -- are the undisputed heavyweights. What is data virtualization -- and, most important, why does it matter? Think of DV as a scalable, service-aware, more abstract version of data federation, which is still something of an ugly word in some data warehousing circles. Think, then, of DV as a lot of things -- a jack of all trades, even -- just don't think of it as simply or solely a function of data federation.

XQuery 1.0 and XPath 2.0 Data Model (XDM) (Second Edition) This section describes the constraints on instances of the data model. This document describes how to construct an instance of the data model from an infoset ([Infoset]) or a Post Schema Validation Infoset (PSVI), the augmented infoset produced by an XML Schema validation episode. An instance of the data model can also be constructed directly through application APIs, or from non-XML sources such as relational tables in a database. The data model supports some kinds of values that are not supported by [Infoset]. 3.3 Construction from a PSVI An instance of the data model can be constructed from a PSVI, whose element and attribute information items have been strictly assessed, laxly assessed, or have not been assessed. Data model construction requires that the PSVI provide unique names for all anonymous schema types. The data model supports incompletely validated documents. 3.3.1 Mapping PSVI Additions to Node Properties 3.3.1.1 Element and Attribute Node Type Names 3.3.1.4 Pattern Facets year

Introduction: Giants In Tiny Pants Do you like word problems? You know those annoying "math" questions you had to study in class simply because the SAT used them. They went something like this: "A train leaving a station at 10:50pm from San Francisco is travelling at 40MPH. Even today, after studying years of advanced mathematics, statistics, and computer science, I still can't solve these things. Imagine if all mathematics was like this where every single problem you encountered, no matter how simple or complex, was only written as English because nobody understood the symbols. Thankfully, humans invented symbols to succinctly describe the things that symbols are best at describing, and left human languages to describe the rest.footnote{Thankfully, the things that can be described with symbols is pretty small or else nobody would be able to read.} The power of symbolic languages is that, once you learn them, they can describe things more quickly and accurately than a human language can. name.match(/^[\da-z]+\d$/); (?

How to check if a line is blank using regex