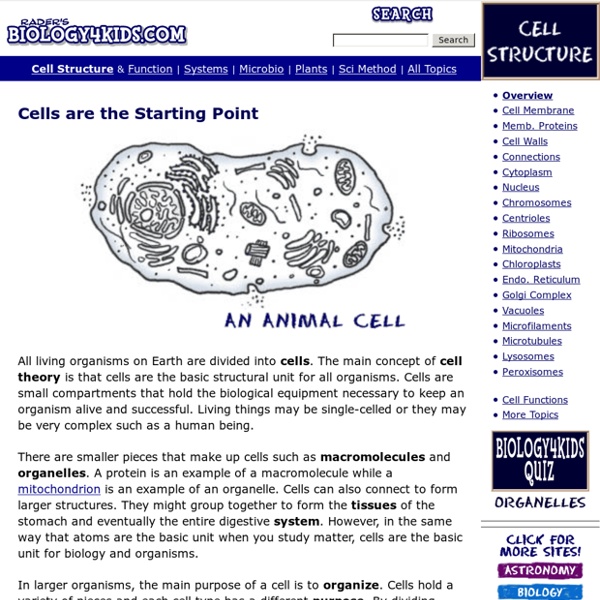 All living organisms on Earth are divided into cells. The main concept of cell theory is that cells are the basic structural unit for all organisms. Cells are small compartments that hold the biological equipment necessary to keep an organism alive and successful. Living things may be single-celled or they may be very complex such as a human being. There are smaller pieces that make up cells such as macromolecules and organelles. A protein is an example of a macromolecule while a mitochondrion is an example of an organelle. In larger organisms, the main purpose of a cell is to organize. If you were only made of one cell, you would be very limited. There are many types of cells. Plant cells are easier to identify because they have a protective structure called a cell wall made of cellulose. Cells are unique to each type of organism. Humans have hundreds of different cell types. Related:  Cells • Cell Review Websites

Cell Models: An Interactive Animation Nucleolus: The prominent structure in the nucleus is the nucleolus. The nucleolus produces ribosomes, which move out of the nucleus and take positions on the rough endoplasmic reticulum where they are critical in protein synthesis. Cytosol: The cytosol is the "soup" within which all the other cell organelles reside and where most of the cellular metabolism occurs. Though mostly water, the cytosol is full of proteins that control cell metabolism including signal transduction pathways, glycolysis, intracellular receptors, and transcription factors. Cytoplasm: This is a collective term for the cytosol plus the organelles suspended within the cytosol. Centrosome: The centrosome, or MICROTUBULE ORGANIZING CENTER (MTOC), is an area in the cell where microtubules are produced. During animal cell division, the centrioles replicate (make new copies) and the centrosome divides. Centriole (animal cells only): Each centriole is a ring of nine groups of fused microtubules.

Microorganisms Let's study the wee ones of the world known as the microbes or the microorganisms. If you spend your life studying them, you would be a microbiologist. These are the smallest of the small and the simplest of the simple. What makes a microbe? It took one invention to change the way we see the world of microbes - the microscope. We'll give the big overview on the variety of microorganisms here. They can be heterotrophic or autotrophic. They can be solitary or colonial. They can reproduce sexually or asexually. Cells Seeing the word cell triggers so many memories. You may recall your last dropped call, solar panels, your current Fantasy Baseball spreadsheet, or your last school field trip to the local penitentiary. No? All living things (we like to call them organisms because no one wants to be called a "thing") have five characteristics in common. The Five Basic Attributes of Life, Round Two Complexity and organization. (If you are totally confused right now, it probably means you need to go back to our handy dandy little intro unit. Cells live and behave in a variety of ways. Other cells are able to grow and reproduce without the services of other cells. There are two major types of cells: Prokaryotic cells Eukaryotic cells While both types of cells have some attributes in common, we usually focus on the differences (glass-half-empty theory), like the fact that eukaryotic cells are generally larger and more complex than prokaryotic cells.

Plants If you're not a microbe and you're not an animal, you are probably a plant. There are about 300 thousand known species of plants. Because plants adapt so well to almost any climate, scientists needed a way to organize the hundreds of thousands of species. In the same way there is a system of classification for animals, there is also a system of classification for plants. There are two big biochemical processes on Earth: Photosynthesis and Respiration. Plants also have cell walls that are made of cellulose. Not only do you see plants everywhere in the real world, but they are also all over the scientific world. On a non-scientific level, farmers have been observing plants for thousands of years. National Botanic Garden (US Capitol Video)

Cell Biology Games, Virtual Labs, Activities Cells All living things are made of cells! Learn how they work and what they are made of! Cell organelles such as the nucleus, mitochondria, chloroplasts, ribosomes, lysosomes and many more can be found here. You'll be amazed at what happens in each of your cells! Cell Biology Video Games, Virtual Labs & Activities Cell Explorer: The Animal Cell Explore the microscopic world of the cell in your mini ship! Cell Defense: The Plasma Membrane The only barrier between the cell and the dangers of the outside world is the plasma membrane. Check out the Worksheet that goes along with the game (courtesy of Ms. CellCraft Build a cell and learn about the organelles and processes that make cells work! Cells Quizzes Test your knowledge of Cell Biology!

Science Projects: Animals and Zoology - Education Bug This article has information and ideas for science projects involving animals and zoology for elementary students, middle school, and high school students. Consider these animal and zoology projects for your next science fair. Science projects can assist in getting learning out of the classroom and getting the student beyond the textbook. This set of projects focuses on animals and zoology. It may be helpful to consider these projects as jumping off points that you can modify for curricular reasons of to better suit your child’s development or interests. Projects listed for one grade range can be adapted for another, or repeated with the criteria or description changed to suit the child’s new skills and understanding. 1st, 2nd, 3rd, and 4th Grade Tips: Practicing observation skills and using simple measuring devices are typical approaches for elementary science projects. Go to a zoo, aquarium, garden, park, or preserve. 5th, 6th, 7th, and 8th Grade 9th, 10th, 11th, and 12th Grade

Cell Function All cells have a purpose. If they don't do anything productive, they are not needed anymore. In the big picture, a cell's purpose is much more important than acting as small organizational pieces. They had their purpose long before they started working together in groups and building more advanced organisms. When alone, a cell's main purpose is to survive. Even if you were a single cell, you would have a purpose. In the same way that cells survive in different ways; all cells have different types and amounts of organelles. While they might have a purpose, more advanced cells have a difficult time surviving on their own.

What is a cell? Cells are the basic building blocks of all living things. The human body is composed of trillions of cells. They provide structure for the body, take in nutrients from food, convert those nutrients into energy, and carry out specialized functions. Cells also contain the body’s hereditary material and can make copies of themselves. Cells have many parts, each with a different function. Cytoplasm (illustration) Within cells, the cytoplasm is made up of a jelly-like fluid (called the cytosol) and other structures that surround the nucleus. Cytoskeleton The cytoskeleton is a network of long fibers that make up the cell’s structural framework. Endoplasmic reticulum (ER) (illustration) This organelle helps process molecules created by the cell. Golgi apparatus (illustration) The Golgi apparatus packages molecules processed by the endoplasmic reticulum to be transported out of the cell. Lysosomes and peroxisomes (illustration) These organelles are the recycling center of the cell. Next: What is DNA?