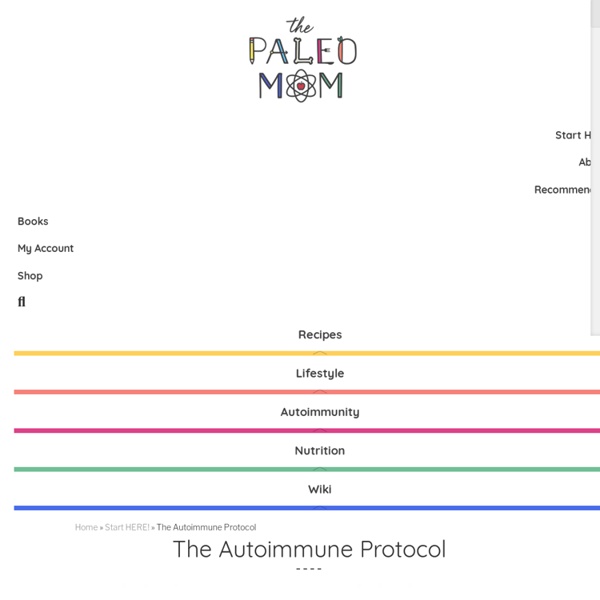 12 In-Depth Tactics to Seriously Boost your Energy It’s often said that time is money, but I don’t think that’s precise enough. The way I see it, energy is money. The more you can accomplish in a certain amount of time, and the more “hustle” you have in general, the more you can get done and the more you’ll want to do. Modifying Paleo for Autoimmune Conditions (i.e., The Autoimmune Protocol) - The Paleo Mom NOTE: This is no longer the most up-to-date version of the autoimmune protocol. You can see the most current version here. Autoimmune conditions and a leaky gut go hand in hand. In fact, in every autoimmune condition that has been tested, a leaky gut is present and is a contributing factor to the illness (not all autoimmune conditions have been tested, but many in the paleo community assume that leaky gut is a factor in all autoimmune conditions). For individuals with suspected or diagnosed autoimmune disease, additional dietary guidelines exist to help address the disease.

Atkins Diet Investigated Dr. Robert Atkins first wrote about the Atkins diet in the 1981, in his book The New Diet Revolution. Over the last 2 decades, the Atkins diet plan has become one of the most popular diet plans – with Time Magazine naming it “The most popular diet program”. In response to the negative press some aspects of the Atkins program received, the people at Atkins have revamped their program in 2010 so that it lined up with a healthier way of eating called The New Atkins for a New You. At the end of 2013 Atkins revamped their diet once again with their new book, The New Atkins Made Easy.

The Beginner's Guide to the Paleo Diet So you wanna learn about the Paleo Diet, eh? Here’s the ENTIRE diet in a nutshell: If a caveman didn’t eat it, neither should you. Now, obviously there’s more to it than that, and that’s what I’m going to cover in great detail with this article today. When you are following the Paleo Diet, you can eat anything we could hunt or gather way back in the day – things like meats, fish, nuts, leafy greens, regional veggies, and seeds. Sorry, the pasta, cereal, and candy will have to go!

Stories of Recovery Index - Autoimmune Wellness AIP Stories of Recovery is a success story series about regular people from the Autoimmune Protocol community who are changing their lives using the protocol. Each month a new person is featured and readers have the opportunity to discover all the different health challenges that are being overcome by folks just like themselves on the same path. At Autoimmune Wellness, we hope you’ll be inspired by, empathize with, and learn from these stories. If you are interested in sharing your story, please let us know by filling out our interest form. January 2017 // Lyndsey, polyarteritis nodosa When Lyndsey’s doctors couldn’t make sense of her disparate symptoms, she cycled through incorrect diagnoses.

Macro Calculator How much carbohydrate, protein, and fat should you be eating each day? Directions Enter daily Calorie goal amount. Select from a number of common diet ratios. Or, put in custom ratios.Select how many meals you eat each day.Calculate! Ketogenic Food Pyramid ShareFollow us 119.4k Hi Friends! We've been working on a keto food pyramid to help you stick with your diet and make the right food choices. Just like my recipes, this pyramid is primal-friendly and if you skip the dairy section, it's also suitable for a paleo diet. To learn about ketogenic foods in detail, check out my Complete Keto Diet Food List. where I have also listed carb and protein content in common keto-friendly foods. For a bigger version of my ketogenic food pyramid, click on the image below:

The Lupus Diet A large body of research shows that a healthy, unprocessed diet is very important for managing autoimmune disorder symptoms, including those caused by lupus, because it helps control inflammation stemming from poor gut health. The majority of your immune system is actually located in inside your gastrointestinal tract, which is also known as the microbiome, and researchers believe that up to 90 percent of all diseases can be traced in some way back to dysfunction of the gut/microbiome. That’s why if you have lupus, focusing on a lupus diet treatment plan is a major step natural lupus treatment. As the Lupus Foundation of America puts it, “The scarcity of lupus-specific diet and nutrition information remains a great frustration.

What is Autoimmune Paleo or AIP Diet? The Autoimmune Protocol is a diet that helps heal the immune system and gut mucosa. It is applicable to any inflammatory disease. We have a problem in this country with how we eat, treat disease and heal disease. AIP addresses inflammation in the gut that causes Autoimmune Disease. Autoimmune disease is a condition where the body cannot tell the difference between healthy tissue and foreign invaders and a hypersensitive reaction occurs. The body starts self-tissue attack. Delano Report Soil depletion and the decline in nutritional content of fruits and vegetables Have Fruits and Vegetables Become Less Nutritious? Due to currents levels of soil depletion, genetic modification and pesticides, crops grown decades ago were much richer in vitamins and minerals than the varieties most of us get today.

Defeating Progressive Multiple Sclerosis without Drugs The Wahls Protocol: A radical new way to treat all chronic autoimmune conditions using Paleo principles by Terry Wahls, M.D. with Eve Adamson – released in paperback on December 30, 2014 An integrative approach to healing chronic auto-immune conditions by a doctor, researcher, and sufferer of progressive multiple sclerosis whose TEDx talk is already a web sensation. Like many physicians, Dr. Keto Diet for Women: How to Make It Work + Avoid Side Effects Far from being a new “fad diet”, the keto diet — a very low carb, high fat diet — has been used by doctors since the 1920’s to treat patients with serious illnesses. In recent years the keto diet has steadily been gaining more attention, due to how it promotes weight loss by forcing the body to burn fat for energy. More than ever before, a wider audience is now considering trying the keto diet, including those interested in benefits beyond weight loss.

Intermittent Fasting Can Improve Brain Function By Arjun Walia, contributor for Collective-Evolution.com Below is a TEDx talk given by Mark Mattson, the current Chief of the Laboratory of Neuroscience at the National Institute on Aging. He is also a professor of Neuroscience at The Johns Hopkins University, and one of the foremost researchers in the area of cellular and molecular mechanisms underlying multiple neurodegenerative disorders, like Parkinson’s and Alzheimer’s disease. I chose to include ‘Big Pharma’ in the title because that’s exactly what it is.