15 Characteristics of a 21st-Century Teacher 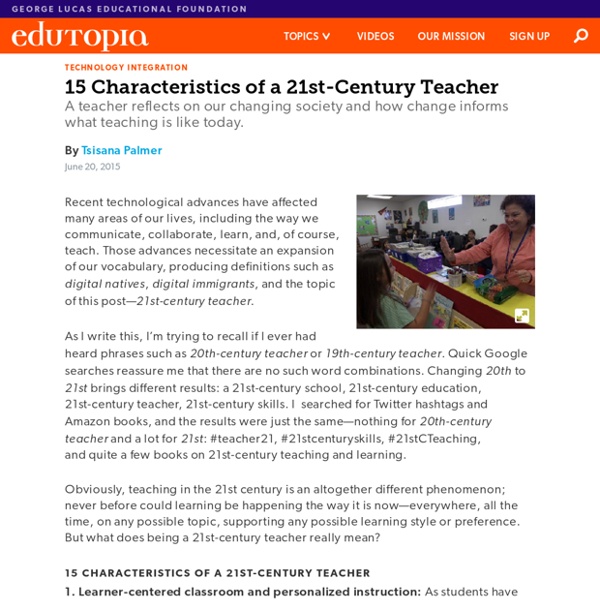 Integrating the 4 Cs into Your Classroom This is a module of trainings designed to show how technology can be used to foster the 21st Century Skills of Collaboration, Communication, Critical Thinking, and Creativity. Although specific technologies are highlighted, there are hundreds more that are just as good that could be used for the same purposes! By the end of this learning module, the learner will be able to: Define the 4 Cs of 21st Century Skills.

21 Characteristics of 21st Century Learners Whether you are a teacher, a parent, an aunt or an uncle, it is important to know that today’s students are wildly different in some ways, from past generations. 21st Century learners… Want to have a say in their education. They’ll respond better when their voices are heard.Often have higher levels of digital literacy than their parents or teachers. They don’t know a world without computers.Expect transparency in their parents, teachers and mentors. 11 Habits of an Effective Teacher 2. Makes a Difference There is a saying, "With great power, comes great responsibility". Project-Based Learning Over time, the world of public education has grown increasingly difficult, for both students and teachers. Its focus has drifted from applicable, relevant instruction to test performance and attainment of standards. At times, the prognosis can seem bleak. However, there has been a renewed interest in and revival of John Dewey’s revolutionary 20th-century “learning by doing” theory, in the form of project-based learning (PBL) and the establishment of charter schools. With its focus on demonstration of knowledge and interdisciplinary ideals, project-based learning encourages students to become active participants in their learning.

Learner agency » CORE Education Explanation The concept of agency has been central to educational thinking and practice for centuries. The idea that education is the process through which learners become capable of independent thought which, in turn, forms the basis for autonomous action, has had a profound impact on modern educational theory and practice. One way of thinking of learner agency is when learners have “the power to act”. Agency is when learning involves the activity and the initiative of the learner, more than the inputs that are transmitted to the learner from the teacher, from the curriculum, the resources and so forth.

Strategies K-12 Teachers Can Use to Work Efficiently When Teaching Online Teaching in a hybrid in-person/remote model requires significantly more planning than teaching in the traditional classroom model. Tasks that were once quick, such as monitoring students’ progress during class and following up on late and missing assignments, have become laborious, and everyday activities like making sure that students have access to material from the school library and determining the best technology tools to meet students’ needs take a tremendous amount of planning. More than ever, it’s important that I use my time efficiently and allow myself time to recharge. Organizing Tasks

21st Century Skills Concepts What is meant by "21st Century Skills?" How do they relate to what I should be teaching in my classroom? These are just some of the questions that you might be asking when you hear the term "21st Century Skills." In this series of tutorials, we will present what we mean by the terminology and how it relates to the models, frameworks, and technology standards that have been developed by other organizations. Students need different skills for a changing world The Japanese want their kids to be better problem solvers. In Finland, they're encouraging expression. In the classrooms of Singapore, children are being taught critical and inventive thinking. Across the world, many countries are pouring resources into pinpointing the skills, behaviours and new knowledge young people need to successfully navigate life and work in the 21st century. Governments of all types and flavours are recognising that while obtaining and retaining knowledge remains fundamental, it is but one of many capabilities young people need to survive and thrive.