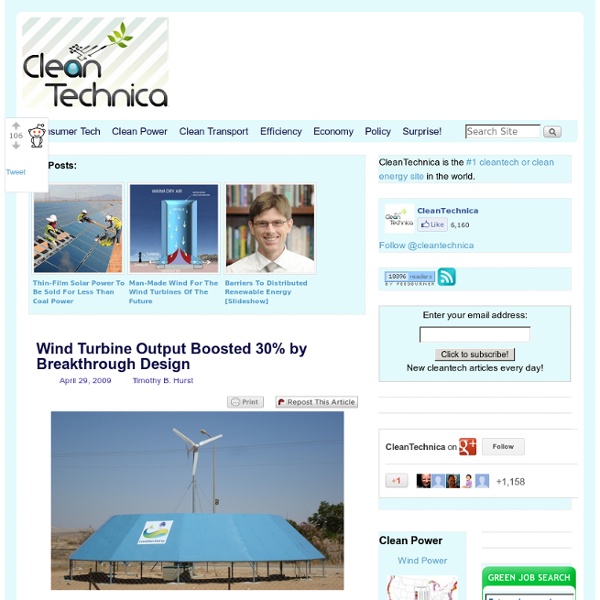 Clean Power Published on April 29th, 2009 | by Timothy B. Hurst Passive structure design of “Wind Energizer” by Leviathan Energy reportedly increases wind turbine efficiency 30% in field tests. Technological advancements in wind energy efficiency have generally come incrementally and usually made via a process of increasingly large wind turbine blades. Put simply, the model has been: longer blades = more output per turbine. But that pattern of incremental improvements may be a thing of the past if Leviathan Energy has anything to say about it. The principle theory at work is that by placing passive objects around a wind farm it will change the circulation around a large wind turbine. “This is a disruptive technology,” Leviathan Energy CEO Dr. Farb is a bit of a modern day renaissance man. “We’re shaping the flow so that the highest velocities hit the blades. >>See also : Leviathan Launches US Sales Effort for Wind Energizer Images courtesy of Leviathan Energy Follow Tim Hurst on twitter

How I Built An Electricity Producing Wind Turbine Several years ago I bought some remote property in Arizona. I am an astronomer and wanted a place to practice my hobby far away from the sky-wrecking light pollution found near cities of any real size. I found a great piece of property. The problem is, it's so remote that there is no electric service available. Wind Power Generators Annual Output (KWH/year) = 0.01328 (D^2) (V^3) source... Where D^2 is the blade diameter in feet squared, and V^3 is the wind velocity cubed in mph -- this is the year round average wind speed -- see wind maps below. So, a 10 ft diameter wind turbine in 12 mph average winds might produce about (0.01328)(10^2)(12^3) = 2300 KWH/year Note that the energy produced is proportional to the cube of wind speed -- having enough average wind speed is everything in wind turbines. Use the wind maps discussed below and a wind survey of your site to determine if a wind turbine will actually payoff.

Schools of Fish Inspire New Wind Farms that Will Increase Energy 10X Every now and then you come across an article and concept that makes you really smile and feel good on the inside. Typically they are "feel-good" stories that you see online or on the news, but today I came across this story about how scientists have designed new wind farms based on how schools of fish swim. So not only are we creating technology to help the environment but we are looking at nature for help. The new vertical-axis wind turbines are designed by Caltech and are currently being tested in the California desert.

Make a Wind Generator Make: Projects With a motor and some piping, it’s easy to enjoy free energy forever. There are no limits to what you can do with wind power. How To Build A 'Wasp' Wind Turbine Materialsthin, bendable sheet of plastic or any other material that can be used to build a cone two boards of MDF or any other sturdy material glue, tape For the nozzle we chose an arc with a radius of 61cm made of a thin and bendable sheet of plastic. The angle depends on the size of the stand for the nozzle but it is helpful to have sufficient material overlapping as this makes the procedure of taping/gluing the cone much easier. Build this open source DIY wind turbine for $30 Getting started with home wind energy projects can set you back a pretty penny if you buy a finished product, but if you're a little bit handy and don't mind scrounging for materials and getting creative in the garage or backyard, you can try your hand at building one of these DIY wind turbines for about $30 in materials. After all, it is #iheartrenewables week! We've previously covered Daniel Connell's open source concentrated solar collector plans, but now he's back with another great DIY renewable energy project, a vertical axis wind turbine based on the Lenz2 lift+drag design. Connell's design calls for using aluminum lithographic offset printing plates to catch the wind, which he says can be obtained cheaply (or possibly even free) from an offset printing company, and a variety of hardware and a bicycle wheel.

Old Method Wind Turbine: Lower Cost This story is from Erik Andrus, owner of Good Companion Bakery, and submitted as part of our Wisdom From Our Elders collection of self-sufficient tales from yesteryear. The idea for the Savonius rotor began with our cheapness. We did not want to pay for the electricity it to run our Austrian flour mill for the long stretches required to mill flour for our bakery. Philippe Starck's Stylish Wind Turbine For Your Yard In keeping with Philippe Starck's philosophy of creating practical objects with a sense of aesthetics and functionality, the designer has created a couple chic wind turbines, named Revolutionair. The hip French designer first unveiled his sketches in 2008, working with Italian generator company Pramac to make them a reality. This sleek look offers another image of the classic three-blade turbine we've come to love - and some hate. If Starck's designer windmills were whirling around mountaintops, would North Carolina ban wind farms because they're "ugly"? Whisk-shaped windmill for the garden. Photo courtesy of Pramac

Solar Energy Job Growth Outpaces Other Industries California is home to the largest advanced energy industry in the country, according to the first-ever industry-wide survey released today by the Advanced Energy Economy Institute. At 431,800 jobs today, advanced energy is bigger by employment in California than the motion picture, television, and radio industries; mining and quarrying; semiconductors; and aerospace. Advanced energy jobs grew 5% in the past year – more than double the overall state job growth rate – and is on track to grow 17% in the coming year, to more than 500,000 workers, based on employer hiring plans. While California is widely recognized as a national leader in energy policy, jobs directly related to the industry have not been quantified until now.