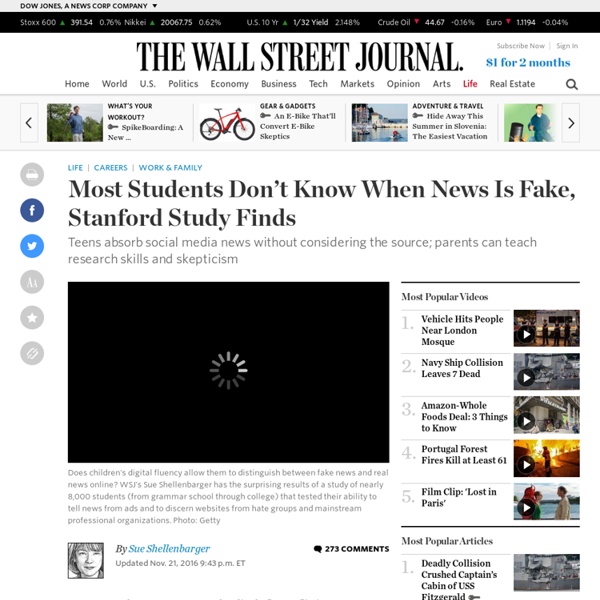 Preteens and teens may appear dazzlingly fluent, flitting among social-media sites, uploading selfies and texting friends. But they’re often clueless about evaluating the accuracy and trustworthiness of what they find. Some 82% of middle-schoolers couldn’t distinguish between an ad labeled “sponsored content” and a real news story on a website, according to a Stanford University study of 7,804 students from middle school through college. The study, set for release Tuesday, is the biggest so far on how teens evaluate information they find online. Many students judged the credibility of newsy tweets based on how much detail they contained or whether a large photo was attached, rather than on the source. More than two out of three middle-schoolers couldn’t see any valid reason to mistrust a post written by a bank executive arguing that young adults need more financial-planning help. However, fewer schools now have librarians, who traditionally taught research skills.

Snopes' Field Guide to Fake News Sites and Hoax Purveyors The sharp increase in popularity of social media networks (primarily Facebook) has created a predatory secondary market among online publishers seeking to profitably exploit the large reach of those networks and their huge customer bases by spreading fake news and outlandish rumors. Competition for social media’s large supply of willing eyeballs is fierce, and a number of frequent offenders regularly fabricate salacious and attention-grabbing tales simply to drive traffic (and revenue) to their sites. Facebook has worked at limiting the reach of hoax-purveying sites in their customers’ news feeds, inhibiting (but not eradicating) the spread of fake news stories. Hoaxes and fake news are often little more than annoyances to unsuspecting readers; but sometimes circulating stories negatively affect businesses or localities by spreading false, disruptive claims that are widely believed. National Report World News Daily Report

News Coverage of the 2016 General Election: How the Press Failed the Voters - Shorenstein Center By Thomas E. Patterson A new report from Harvard Kennedy School’s Shorenstein Center on Media, Politics and Public Policy analyzes news coverage during the 2016 general election, and concludes that both Hillary Clinton and Donald Trump received coverage that was overwhelmingly negative in tone and extremely light on policy. The negativity was not unique to the 2016 election cycle but instead part of a pattern in place since the 1980s and one that is not limited to election coverage. “A healthy dose of negativity is unquestionably a good thing,” writes Thomas Patterson, the study’s author.

How to avoid getting conned by fake news sites - CNET You don't need Socrates to tell you that some websites spin crazy, made-up yarns just so you'll click a link. False information and fake news have been a problem on the internet almost since the beginning. The situation is so bad, one website, Snopes.com, is dedicated to debunking crazy internet tales and rumors that pop up like digital cockroaches. The issue rose to prominence again with the election of Donald Trump, which critics say was aided by fake news reports that were rampant across social media, especially Facebook. CEO Mark Zuckerberg has called that notion "pretty crazy" but says his company is working to clamp down on bogus articles. In the fervor over whether Facebook should do something to separate fiction from fact, you may have wondered how you could figure out whether an article is worth clicking on.

The Failure of Facebook Democracy In December of 2007, the legal theorist Cass R. Sunstein wrote in The Chronicle of Higher Education about the filtering effects that frequently attend the spread of information on the Web. “As a result of the Internet, we live increasingly in an era of enclaves and niches—much of it voluntary, much of it produced by those who think they know, and often do know, what we’re likely to like,” Sunstein noted. In the piece, “The Polarization of Extremes,” Sunstein argued that the trend promised ill effects for the direction—or, more precisely, the misdirection—of public opinion. “If people are sorted into enclaves and niches, what will happen to their views?”

We Have a Bad News Problem, Not a Fake News Problem In the days since the 8 November 2016 presidential election, news outlets have been rushing to cover a phenomenon we here at snopes.com have been dealing with for many years, one that is only now finally becoming widely recognized, addressed, or understood: the plague of bad news on the Internet. Unfortunately, that phenomenon is commonly being referred to as a "fake news problem," a term that itself may be nearly as misleading as the issue it seeks to address. Certainly, the online world is full of fake news — fabricated stories set loose via social media with clickbait headlines and tantalizing images, intended for no purpose other than to fool readers and generate advertising revenues for their publishers. But just as the term "urban legend" (which has a specific folkloric meaning) was long ago co-opted to broadly refer to any narrative that is false or questionable, so the term "fake news" is now being used so broadly as to blur important distinctions.

Reading News across the Political Spectrum Last spring, I had to confront a gaping hole in my professional knowledge. But that is jumping ahead. Let’s start at the beginning, with our students. It began with a project in the 10th grade American Political Systems class. Working in pairs, students were to select two articles with differing viewpoints about a contemporary issue, then lead a current events discussion. Last spring was the first time I had the opportunity to meet with students about their article choices. Will Cutting Off Ads From Google & Facebook Really Stop Fake News? I've already argued that the rush to point fingers at Facebook for allowing lots of fake news to get passed around is greatly overhyped by people searching for explanations for last week's election results. That doesn't mean that people shouldn't be looking to do something about fake news on various platforms. On Monday, Google also faced some controversy over fake news, when its top result for people searching for "final election results" pointed to a fake news site with made up numbers. In response, a few hours later, Google announced that it was going to start banning fake news sites from using Google's AdSense ad product. A few hours after that, Facebook announced a similar pledge to stop allowing those sites to make money from Facebook.

2016 Lie of the Year: Fake news Ignoring the facts has long been a staple of political speech. Every day, politicians overstate some statistic, distort their opponents’ positions, or simply tell out-and-out whoppers. Surrogates and pundits spread the spin. Then there’s fake news, the phenomenon that is now sweeping, well, the news. Fake news is made-up stuff, masterfully manipulated to look like credible journalistic reports that are easily spread online to large audiences willing to believe the fictions and spread the word. Let Them Eat Facts: Why Fact Checking Is Mostly Useless In Convincing Voters Last week I wrote a bit about the ridiculous and misguided backlash against Facebook over the election results. The basis of the claim was that there were a bunch of fake or extremely misleading stories shared on the site by Trump supporters, and some felt that helped swing the election (and, yes, there were also fake stories shared by Clinton supporters -- but apparently sharing fake news was nearly twice as common among Trump supporters than Clinton supporters). I still think this analysis blaming Facebook is wrong.

It’s time to retire the tainted term ‘fake news’ Fake news is a real thing — as evidenced by these wholly invented stories created in Macedonia with the intent of fooling U.S. audiences. But the phrase is now being used as a catch-all insult and has lost its meaning. ​ (Raphael Satter/AP) Be the First to Test NLP’s checkology™ Virtual Classroom Skip to main content Be the First to Test NLP’s checkology™ Virtual Classroom The News Literacy Project’s checkology™ virtual classroom is here, and you can be among the first to try it! Germany investigating unprecedented spread of fake news online German government officials have said they are investigating an unprecedented proliferation of fake news items amid reports of Russian efforts to influence the country’s election later this year. The BfV domestic intelligence agency confirmed that a cyber-attack last December against the Organisation for Security and Cooperation in Europe (OSCE) used the same “attack infrastructure” as a 2015 hack of the German parliament attributed to Russian hacking group APT28. Last month, BfV said it had seen an “enormous use of financial resources” and the deployment of a wide variety of Russian propaganda tools to carry out disinformation campaigns aimed at destabilising the German government.