I Said I Want the Red Bowl! Responding to Toddlers' Irrational Behavior 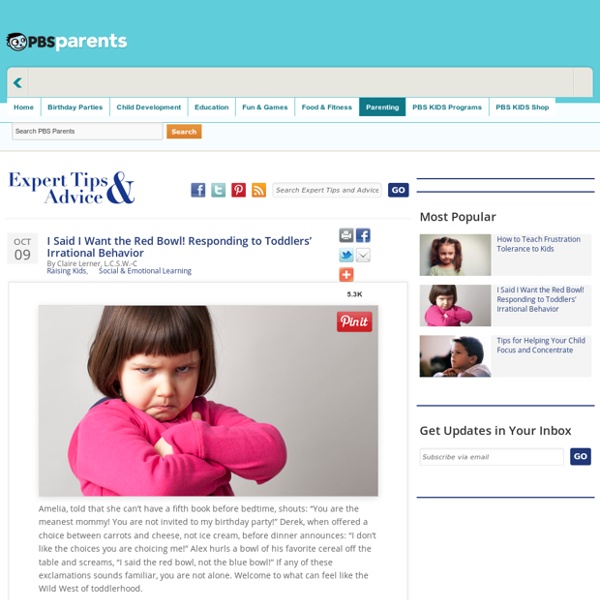 Pin It Amelia, told that she can’t have a fifth book before bedtime, shouts: “You are the meanest mommy! You are not invited to my birthday party!” Derek, when offered a choice between carrots and cheese, not ice cream, before dinner announces: “I don’t like the choices you are choicing me!” Alex hurls a bowl of his favorite cereal off the table and screams, “I said the red bowl, not the blue bowl!” If any of these exclamations sounds familiar, you are not alone. But seen through the eyes of the child, and through the lens of development, these behaviors, while maddening, are utterly normal, and signal important milestones are being achieved. Getting clear on expectations is critical because the meaning we assign to a child’s behavior influences how we manage our own emotions and reactions to the behavior at hand. Here are some important factors that influence young children’s behavior that are helpful to keep in mind when dealing with challenging behaviors: So, what’s a parent to do?

Does my toddler have a short attention span because she won’t sit still for a story? A: It is perfectly normal for toddlers to not sit still very long—period. Most don’t like to stay in one place for long now that they can explore in so many new ways—by running, jumping, and climbing. So, an adult’s idea of snuggling on the couch to hear a story may not be the same idea a toddler has for story-time. You may only be able to read or talk about a few pages in a book at a time. Here are some ways to engage active children in reading: Read a book at snack times when your child may be more likely to sit for longer.Offer your child a small toy to hold in her hand—such as a squishy ball—to keep her body moving while you read.Read in a dramatic fashion, exaggerating your voice and actions.

Schema and Fairies - Kathy Brodie Early Years Training Schemas are one of those things that divide practitioners, like fairies at the bottom of the garden. You either believe in them and are in absolute awe at how amazing they are, or you just don’t believe they exist. It’s really interesting when you discuss this with people and it’s extra exciting when a ‘non-believer’ suddenly says “That describes my key child exactly!!” But first of all, let’s explore what a schema is. Athey (2007) defines schema as ‘patterns of behaviour and thinking in children that exist underneath the surface feature of various contents, contexts and specific experience’ (page 5). Nutbrown (2006) extends this to patterns of ‘action and behaviour’ (page 10).

Teaching English to learners with Special Educational Needs (SENs) – Myths and realities ‘I know I have children with special educational needs in my class, I want to help them and we are supposed to promote inclusion, but I really am not sure how to do this’ Vera, primary teacher from Spain ‘Some of the children in my class are really badly behaved, they can’t sit still, don’t finish their work and are always calling out. I think they might have a learning difficulty, but I don’t know what to do’ Kris, secondary teacher from Poland Do you feel like these teachers?

Symbolic play and language development 1. Introduction 1.1. Relationship between symbolic play and language How can parents and teachers best educate young children? What principles can both teachers and parents bring to the education of very young children? Gillian Craig, who was part of the Learning Time with Shaun and Timmy writing team, explains. As teachers and parents, we follow certain principles in our roles.